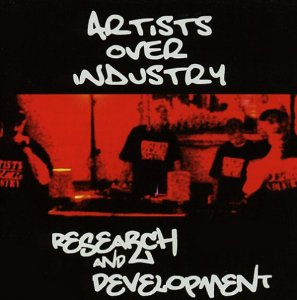 Artists Over Industry :: Research and Development

“Backpack” rap is a controversial topic for many. The plain truth is that for most part the term is used in a derogatory manner to label a group of hip-hop fans and acts and people take offense to such labeling. I use the term and I use it to refer to those rappers (and their fans) who focus most of their time on rapping about how much they love hip-hop, how they are here to save hip-hop, and how they live for hip-hop. I’ll be honest, I hate backpackers and their music. That is not to say I all I listen to is commercial hip-hop or gangsta rap. I’m a diehard Wu-Tang fan, I love Kool Keith, M.F. Doom, J-Zone, and many other acts who some people may consider “backpacker” music. But the music made by these acts is about more than just hip-hop, it talks about different issues and topics, even if they are Kool Keith’s space ships or Doom’s monster island. I wouldn’t even consider a CD full of nothing but battle raps “backpacker” music. Basically I would rather hear an entire album about how ill you are or about an imaginary world than hear how much you care about hip-hop for an hour. With all that said, “Research and Development” is backpacker music made by backpackers. Surprisingly I don’t hate it as much as I thought I would, I don’t love it, but the production saves what might have been a completely unbearable album.

Hailing out of Pennsylvania, Artists Over Industry consists of Windchill, Inkwell, Speechless, and Q-Sak. I believe the break down is 2 emcees and 2 producers. The production on this album is its saving grace as Speechless and Q-Sak come through with consistently head nodding beats. “Uniting of Kings” is a melodic combination of strings and pianos that is especially pleasant to the ears. “Nose to the Grindstone” sounds almost like a Wu-Tang track with an oriental feel to the track. “Flame Retardent” follows the Wu-like vibe with an eerie flute track that sounds like it could have been taken from a Kung-Fu flick. The phat guitar licks on “Ain’t Gonna Lie” are catchy as hell and are almost pop-like, not a bad thing at all as it shows the producers aren’t one-trick ponies. The rest of the production is equally solid. Nothing stands out as extremely ill, but the producers do their job well and give the album a consistent vibe.

The main problem with “Research and Development” lies with the emcees. To make it clear, they are not necessarily bad emcees, but their album title is a good description of what Windchill and Inkwell need to do before they drop another album. Some people were born to flow, Biggie comes to mind, but Inkwell and Windchill are not in that elite group. For them learning to flow is clearly an acquired skill and one that still needs more practice. They handle their jobs well for the most part, but at times they mispronounce certain words for the sake of fitting the rhyme scheme. Other times their rhyme scheme is just too simple, with a constant cadence and no variety. With that said, they can rhyme, they just need more time to feel 100% comfortable behind the mic. Lyrically the two emcees are OK. “Uniting of Kings” comes to mind as a good song where one of the emcees spits:

“My mental condition got me driving on distant highways
I blaze all the time to get extra high on Fridays
Don’t come at me sideways, I speak too nicely
The soul is easy to sell, the cost is pricey So I decided to seek help from a therapist
To tell the truth, deep inside, I was scared as shit
It’s like open-heart surgery, without the Novocain
Only way to heal the wounds is to go through the pain
So now I talk to strangers about my life’s memories
My dark path overshadowed by the light’s energy
My 2 cents is free, just plugged to my enemies
I don’t want nothing except their ear drums lent to me
Thinking about hip-hop and what lies in the balance
What lies is a challenge and AI’s got the talents
Refine your malice and try to rise up out this
And forever spit fireballs at those that doubt this”

It’s a simple but effective verse, though to be honest the topic matter is a bit perplexing. Though the critiques are aimed at both these emcees, one is clearly the better of the two (the one who delivered the quoted verse). If it was his solo album it would actually be much better, but the inclusion of the other emcee is what really brings down the album.

Though one emcee is the better, they both are brought down by their topic matter. If you break down the previous verse you realize not much is said, and what is said is not entirely clear. These emcees tend to rap for the sake of rapping, because they love hip-hop but in the end they either have nothing to say or fail to convey the message they want. On “Noise to the Grindstone” they reference “secrets” that they have and how the mind is crucial, but they seem too caught up in keeping those secrets to say much. They criticize “superficial” rap and hint at how ill they are, but their critique is as shallow as what they criticize and they show no proof of how great their skills are. It would not be a misrepresentation to say that every song on the album is basically the same. The only track that addresses a completely different topic is “Ain’t Gonna Lie.” While spitting to the ladies is a welcome change of pace, outside of the tight production, the emcees sound out of place spitting horrible lines like “by the way I’m eating her I feel like a cannibal.” Every other song has a different name, but essentially finds the emcees proclaiming how wack other rap is, how ill they are, and how they are here to save hip-hop.

The irony in this approach to rap, is that they end up saying as much as the rap that they criticize. Their gripe with gangsta rap, or bling rap may be that the focus is on guns and material possessions and nothing meaningful is said. But when they spend almost all their time criticizing other rap, proclaiming their superiority, and professing their love of music they end up saying nothing meaningful. The emcees sometimes hint at “dark shadows” and other struggles in their life, and I for one would really be interested in hearing the specifics, I think it would be much better than their current approach. They also brag about their skills, but without a battle rap or an ill verse dealing with something other than hip-hop it is very hard to take their proclamations seriously. Overall, the emcees need to realize that they can show their love for hip-hop through their art, they do not have to say it track after track. Rather than criticize the shallowness they see in other music, they should counter that effect by providing meaningful music to offset the negativity they see.

“Research and Development” should be considered a work in progress. Maybe Artists Over Industry realized this and that is why they chose such a title. It has some good production that will surely make your head nod, but outside of that it is not a very good album. While it is clear that everyone involved in this project loves hip-hop and wants to make a positive impact on the world, their approach produces an album that is essentially empty. With a different approach to the topic matter and a bit more practice Artist Over Development may be able to make that impact they talk about the next time around.