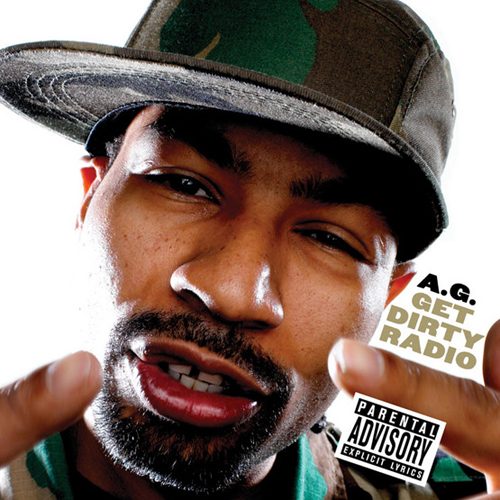 In most cases when a rap album is stamped “Radio” the automatic assumption one makes is that it’s “radio edited,” meaning all the curse words and references to smoking weed have been systematically removed. LL Cool J dropped a classic debut album named “Radio” over two decades ago though, and it was some of the hardest New York rap going. In that dawning era of rap going commercial “Radio” might have gotten radio play, but in 2006 satellite music services and iPods have turned that idea on its ear. Nobody says “I Can’t Live Without My Radio” any more. The stale, commercial-laden, censored and watered down stations you find on the FM dial are largely uninspiring. What would you need a radio to listen to any of them for? Why bother?

The irony of A.G.’s new solo album “Get Dirty Radio” is that there’s even less chance than LL’s “Radio” that most of it will ever get airplay on a commercial radio station – not for quality reasons but for the simple fact of the parental advisory sticker it carries. “Radio” definitely does not imply clean in this case, it implies the behavior one would associate with Radio Raheem in “Do the Right Thing” – a large boombox with four D batteries pumping out a tape full of stomping hip-hop beats and rhymes. THAT is the kind of “Radio” LL Cool J couldn’t live without, but “I Can’t Live Without a Ghetto Blaster” would have been a whack song title and hook for the end of each verse, so like his own name LL abbreviated. If you’re going to make an assumption about “Get Dirty Radio,” don’t assume that it’s ready for radio play or that you’d hear it on FM anyway. Instead imagine “Get Dirty Radio” as a concept straight out of A.G.’s filthy mind, the kind of FM radio station that would never exist under the FCC’s stranglehold of censorship. Picture A.G. operating the control board while smoking a blunt, Showbiz mixing records, and various D.I.T.C. members like Lord Finesse and O.C. drinking 40’s and yelling “YEAH MOTHERFUCKER, GET DIRTY RADIO” over the airwaves. It’s a shame no station like that exists or ever will, but maybe XM 65 could set aside a two hour block for a show with that format.

A.G. has one of the most contradictory careers of any hip-hop artist in rap history. While albums with Showbiz like “Runaway Slave” and “Goodfellas” are considered diamonds of hip-hop history, all-time underground classics, previous solo efforts before “Get Dirty Radio” have been lackluster at best. His name is itself a contradiction, an abbreviation of the phrase “Andre the Giant,” but he shares nothing in stature with the more well-known pro wrestler. What made A.G.’s records with Show hip-hop classics was that despite his smaller size, A.G. had way more heart on his records than men twice his size. Andre’s voice was LARGE on wax, and his vocal attack ferocious. For some reason the solo records until now have lacked that intensity, giving one the feeling A.G. was lost without his partner in crime producing, mixing and guest rapping from time to time. “Get Dirty Radio” sounds like he’s got the passion back again, which is easy to discern from the boxing references he makes in the opening of the DJ Design produced “Triumph”:

“It’s like Felix Trinidad steppin back in the ring
Maybe to claim king, for A.G. the same thing
Minus the four-finger name ring
It ain’t a Yank thing, it’s the N.Y. on the hat
I got a G on my chest and put the dirt on my back
And it’s death before dishonor so I’m flirtin with that
Want drama, got a person for that
That’ll leave you with a foul odor
While I’m runnin up the steps like Balboa”

The production is a key part of bringing A.G. back to the glory days of old. Even though he reminds us on “Frozen” that “It’ll always be A.G. and Show/Lord Finesse, Diamond D and Joe” none of them are producing this frantic and energetic opening track – that duty has been ably handed off to Madlib. As much as you like to see Andre keep it all in the D.I.T.C. fam, it’s cats like Oh No that make tracks “Gigantic,” and production by the late great J Dilla that turns his rhymes into “Hip Hop Quotables.” There are some tracks that miss the mark though – Tommy Tee is overly simplistic on “Pray,” which suits the gruff guest Party Arty well but does nothing for Andre. Cochise goes for a club hit on “Say Yeah” with the double clap beat, and even though it’s not horrible per se it just doesn’t fit A.G. that well. Most of the tracks are a lock though, whether they’re in the family like Lord Finesse blessing “We Don’t Care” and Show hooking up some some rough and rugged symphonic strings for “The Struggle,” or DJ Design getting extra smooth with old school champion sound reggae riddims for “A Giant by Design”:

“I might be dingy and (dirty) but please don’t rinse me
Got a +Jones+ like +Quincy+, you sick? Convince me
Wizard of the game, you soft I’ll give you some heart
Got chicks that’ll give you the brains (OH!)
I’m big dog, you Toto, get lost or force me
to put you in a thong and lip gloss, you homo!
My resurrection is destined, crowned
king of the underground with a dirty infection”

You may not be able to find “Get Dirty Radio” on your FM dial, but it’s still worth tuning in. Far from being resigned to the dusty crates of history’s greats, A.G. is still making music that’s not only worth the time but the money. Consider it an investment in the kind of hip-hop you WISH you could hear on the radio, not the passionless soulless bland commercial music that slowly and inexorably robs you of your will to live. “Get Dirty Radio” is good, bad and in a couple of places even ugly, but it’s never boring. Put this one in and crank your boombox WAY past ten.