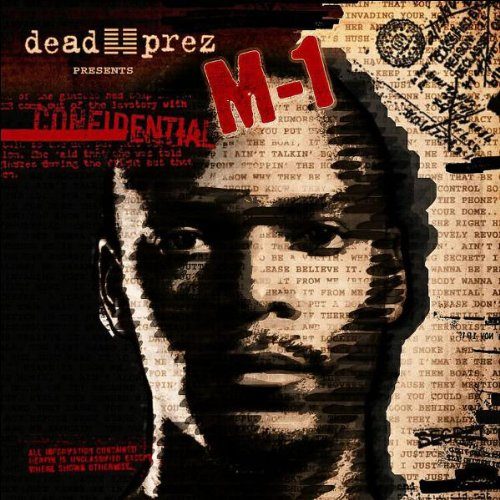 Ever since Dead Prez hit the world with their first single “Hip-Hop” in 1999 they’ve held the torch as Hip-Hop’s leading political rap group. The duo of M-1 and stic.man have embraced this and earlier this year M-1 released a solo album, Confidential, looking to go even more in depth on some subjects that are especially close to him. Recently M-1 sat down with us at RapReviews to discuss the album, why Dead Prez turned down Jay-Z’s offer to be on Def Jam, and more.

Adam Bernard: First thing’s first, what went into the decision to do a solo album?
M-1: My solo album came as a consequence of frustrations with the system that puts out the music and how they try to pigeonhole you and put you in a box and us (Dead Prez) doing various mix tapes and working with various artists with a wide respect inside the industry that really no one knew about and we weren’t able to really make use of properly. Hip-Hop is our tool, is our weapon, but if we become stifled then they kind of put limits on how we can use our power. stic did a solo album in 2003 (Erotic Soul), but he never found a distribution channel to put that album into the world. His solo album was altogether in a totally different direction than Dead Prez had ever gone and for me it said OK there’s definitely a place out here for music that people consider revolutionary. But our take on revolution isn’t everybody’s take on revolution. We have to revolutionize our personal lives as well as our public lives.

AB: So would you consider your album more of a personal revolution vs. a social revolution?
M-1: Not at all, my album kinda goes in the way of the fire that the movement has put inside me. Believe it or not I think Revolutionary But Gangsta was more personal because it kind of explained to you how we got to where we are and we even received some criticism for making an album with that kind of theory in mind. To me people need to know that I grew up trying to get over on the system, I grew up knowin about dealin drugs, I grew up getting political education from the OG’s fightin back, and that’s what RBG was about. In Dead Prez the politics that we hold I put forth before anything personal in my life. When I write I write what I have experienced politically and relate that to my life and that’s whatConfidential is about, that’s why it’s called Confidential, because it mirrors the kind of confidential FBI file they would have been kept on a person like M-1 or stic.man. So this is my confidential file. There’s a confidential file on you and I think with that being said that’s the most political statement that I can make.

AB: Speaking of politics, you’ve seen your fair share of the major label kind. What went through your mind when you got Jay-Z for the “Hell Yeah” remix and were released by Sony on the same day?
M-1: Being on Sony came by default. Coming out of the Loud Records situation where we had seen many distribution changes from RCA to Sony is how we ended up at Columbia. I don’t know who’s bright idea it was at Columbia to work with us as Dead Prez, but whoever it was they weren’t able to see the vision through. I expected to not stay at Sony very long. I did not expect to be there at all, really. We fought to get off Sony, we fought tooth and nail to get out of there because felt like there wouldn’t be a proper representation of our effort. When we were released it gave us the opportunity to talk to a lot of other people and see what else is out here in the industry and that’s how we really ended up doing the track with Jay. I think there was some interest from his point of view in Dead Prez and he liked what he was hearin in the album that we were doing even though Sony didn’t know what the hell to do with it. It was a good time because we were able to develop this politic of pimpin the system and we really pimped the system at that point.

AB: You said that Jay was feelin what you were doin, what would your reaction be if he extended a hand now that he’s president of Def Jam and was like “listen, come on this label.”
M-1: That’s really what happened. Def Jam came with a concept called Def Jam Left. It wasn’t a huge extension of the proverbial olive branch but there was an offering and according to what we could see as DP it was still exploitation, it was still under some slave terms and condition. There has to be a way that you can come at a group like Dead Prez with a revolutionary contract, one that is not so exploitative and oppressive, and that didn’t happen and that’s why we didn’t make a move to Def Jam. I’d love to see Jay make some progressive moves in the black and white area, in the contract area, so that artists like Dead Prez and anybody else who doesn’t feel like being pimped, can have access to the system of promotion and marketing, but until then I’m way happier receivin four dollars a record off my efforts than a quarter.

AB: You’ve oftentimes referred to labels as plantations. Is it possible for an artist work with the plantation rather than on one?
M-1: Well, it’s all slavery. If you look at what’s happening with The Lox today these guys have been through some of the most commercially successful situations, Bad Boy and Universal, but they’re going through some of the worst kind of treatment that they’ve ever been through in their life, it’s almost forcing them to retire as a group under the wrath of Sean Puffy Combs’ George Bush-like politics over their contract. We have to be able to call the terms, you have to say this is the relationship under which I will work with you. We really need an overhaul of the system. It’s like calling yourself a slave and a slave master at the same time, the two work in opposition to each other so it’s hard to develop that when it is a contradiction in terms. I think the balance is to carry a sharp knife and cut when necessary and let people know that it is something sharp if you step on the wrong toes and that way we can kinda carve out a new way in the system to work for us.

AB: You definitely seem like you’re on that path to carving out a unique place for yourself. After doing this for over half a decade now what changes have you seen in the culture?
M-1: You name it, our culture changes all the time. We benefit from each other. I’m from an era when I saw it go from street anthems that talked about what’s going on in our hood and were very cognizant of where our communities are to a total shift to our culture being basically overtaken by European culture where everything is Gucci and Maserati and whatever whatever, so I think there’s a fight for over the minds of our people. Now you’re basically seeing the messages of what they want us to buy and buy into versus the reality of what’s happening in the hood. I’m here to help turn that corner and take it on back to something I feel is a little bit more valuable as far as musically because if we keep going in the same direction I think you’re going to see a whole lot of overkill. I think that’s why you’re hearing sentiments from so many corners of the globe that Hip-Hop, at least the old Hip-Hop like we know it, is dead. That still remains to be seen because I’m still alive.

AB: What are your goals for your music?
M-1: My goal is to reawaken the idea that not only is it cool to be up on your own politics and your own agenda but that’s the only way you get in in the hood. That’s my agenda. My agenda is the code of the culture and that is we have to speak on exactly what’s going on in the hood. Also I hope I can create this culture that unites and don’t divide. That’s why I work with Styles P, Ghostface, Q-Tip, because I want people to know that it’s not just me, it’s not just Dead Prez, you’re not just alone with the very few there’s many people who want to do it with us. That’s what I hope to do as well as sell a few hundred thousand records. If I sell a few hundred thousand records I’ll be able to see some financial independence and that’s not only for me, that’s for The People’s Army.

AB: Finally, you mentioned a lot of artists and I know a lot of controversy swirls around Dead Prez and white people and I’m just wondering if there are any white artists out there that you would work with?
M-1: I have a business partner, his name is Fabrizio Sotti, he’s a white man. Not only is he my business partner but he is a producer and an artist who I have respect for. As a producer he produced the track “Early,” which me and stic.man rap on. He also produced the “I’m a Hustler” track for Cassidy. Even before Hip-Hop he made his mark in the jazz community by working with not only Miles Davis at the age of 16, which to me was just something bigger than life to have done, for that white guy at 16 years old to be playing with Miles and his band and then to go on and get a couple of Grammys by working with Cassandra Wilson. I have a huge amount of respect for this person. That’s one of the white boys who’s around me right now and for all of the white people who think that it’s about white and black or that we somehow hate white people, or won’t work with white people in any way, it’s not true, it’s just that I have to come into the relationship on my own terms and I won’t be pimped.

AB: It sounds like you’re talking about a different R word, it’s not about race, it’s about respect.
M-1: Yeah, there it is. That’s what it is.