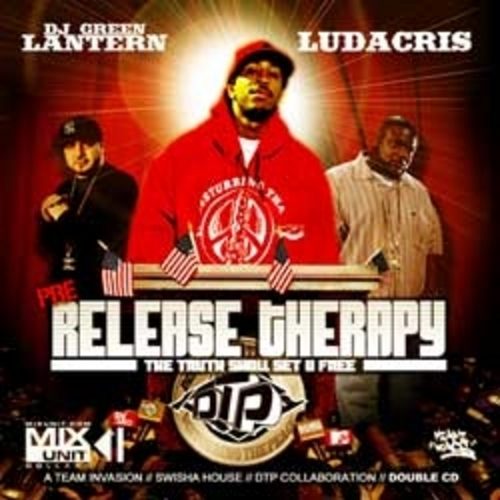 For most rappers a mixtape is only relevant until the actual album is released. After all, today all mixtapes tend to be is lower quality versions of the same thing you find on the album. Every now and then you’ll find some halfway decent “freestyles,” but of course if the verses had been that great the artist would have saved them for the album. In the end this system doesn’t do much good for anyone. The fans get to hear a few tracks from the album, but that kills part of the anticipation and the artist might not sell as many units since fans have had a sneak peak to help them decide whether or not to purchase. Ludacris seems to have realized this in releasing “Pre-Release Therapy” with DJ Green Lantern and Michael “5000” Watts. See, “Pre-Release Therapy” features 21 tracks which are not found on Ludacris’ latest album. Luda didn’t even feel it necessary to even give us his lead single on this mixtape. Instead, fans are treated to track after track of dope Ludacris material that leaves you wondering just how good the album is if this is just the mixtape.

The fact that Ludacris’ latest album already dropped and I already listened to it just makes this mixtape that much more impressive as it makes you wonder how Luda managed to record so much quality material. Part of it might be the highly hyped free agent status Ludacris has just achieved, since it is very rare that a rapper becomes a free agent at the height of his popularity. Usually free agent is the nice term used for underperforming acts dropped from their label. Anticipating the rare opportunity to have major labels catering to him, Luda seems to have stepped up his game big time. He hits you from every aspect of the game on this one too. If you’re in the need of certified East Coast bangers check into “More, More, More” and “In The Ghetto (Remix).” Jadakiss shows up to lend a verse on “More, More, More” and the result is outstanding. Ludacris joins Busta Rhymes to remix “In The Ghetto” from Busta’s “Big Bang Theory” and damn near steals the show. If that’s not enough East Coast flavor, “Coochie Bangin'” will surely satisfy you. At first glance you’ll think Ludacris wants to bring “BET Uncut” back but this explicitly titled track turns out to be an Ol’ Dirty Bastard track featuring Ludacris. The track has hit single written all over it as ODB brings the energy as only he could and the funky beat will sure to get the girls dancing despite ODB’s dirty mouth.

Dirty South fans don’t fret though as Ludacris is surely not the one to ever forget where he’s from. David Banner shows up on “Yeah Mufucka!” though his beat disappoints as it ends up sounding too much like his previous work. Luckily, Luda’s DTP family comes through to up the quality of the Dirty South sounds. I-20 is the strongest representer, dropping three collabos with Ludacris and making this reviewer wonder why I never checked out his album. “Jump Off The G4” is the duo’s version of “Mr. Me Too” and succeeds off the strength of the catchy beat they “borrowed” from The Clipse. “Just Bought Me A Plane” finds the duo reinterpreting “Lean Wit It Rock Wit It” with great success simply because their verses are 100 times lyrically better than the original. The album’s best track might end up being “Rob The Robbers” as Ludacris, I-20 and Young Buck team up for some serious southern heat. The beat will make listeners feel like their listening to a classic Memphis underground tape. I-20’s voice fits the beat perfectly as he almost sounds screwed on the track. Young Buck comes through with his usual energy and gives the track some Tennessee authenticity.

“Pre-Release Therapy” is recommended to all Ludacris fans regardless of whether or not you already have the album. None of the tracks here are on the album and the bulk of material is worth listening to. With that said, it’s not as good as the album in the sense there’s no cohesive feel to the material and the topic tends to be street-heavy, but it’s bounds and leaps better than any other mixtape I’ve peeped this year and will definitely stay in my rotation as much as “Release Therapy.” If you’re a fan of Screwed and Chopped music I suggest you fork over the extra $3 bucks to get the two disk version. Not only is the second disk screwed and chopped, it also consists of entirely different music than that which is found on the first disk.