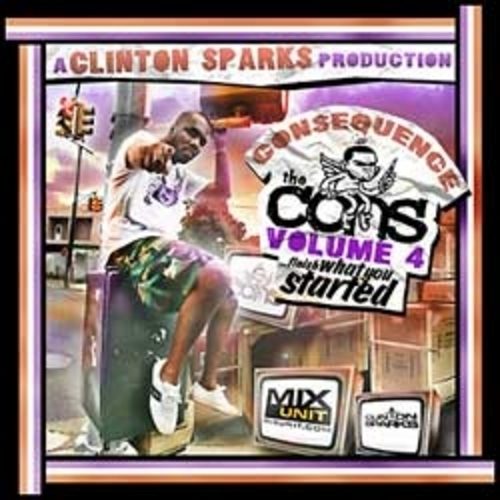 Consequence :: The Cons Vol. 4: Finish What You Started

As a rapper, Consequence is still a work in progress, despite being in the game for about a decade. Most artists seem to finally find their style after years of experimentation. Others get to a juncture in their career when their potential is met, hopefully, by the material they release. After listening to his latest mixtape, “The Cons Volume 4: Finish What You Started,” it’s clear that Consequence still has yet to match his lyrical wit with a strong sense of songwriting. The mixtape is filled with the same simile-stuffed freestyles and concept songs that would work for a younger artist, but not an emcee who’s over ten years deep in his hip-hop journey.

Virtuoso DJ Clinton Sparks hosts the mixtape, providing Quence with a firm selection of beats that fit him and his guests, which is the most obvious improvement from “The Cons Volume 3: The Comeback Kid.” On the vocal tip, Consequence is still slurring too many of his words together. When combined with his occasional lisp, he’s impossible to understand at times. This is especially frustrating when you know that the next punchline that comes out of his mouth could make your jaw drop.

Consequence’s ability to craft cocky, yet charismatic stanzas can be a gift and a curse, however, and “Finish What You Started” is full of songs that exemplify this. Quence is in danger of eroding into another run-of-the-mill battle rapper out of the five boroughs, brimming with arrogant wordplay that doesn’t always transcend in the art of music. At times it sounds like Quence is reaching for that extra metaphor instead of letting it come to him. On “Code Of The Streets,” he sacrifices making a solid point with the song in order to fit in bland similes like “And if they had One Wish/ like a song by Ray J.”

Another problem at times with the mixtape is when Sparks suddenly decides to flip a track back to the beginning when around a minute has already elapsed on the song. This habit made listening to the album an annoying experience at times. Overall, however, Sparks keeps the mixtape flowing musically, with one song transitioning effortlessly into another. One of the mixtape’s strongest beats is on “Shoot â€˜em Up,” which features a high-pitched vocal sample similar to that of Jadakiss’ “By Your Side.” Consequence also gets in storytelling mode on this joint, crafting a solid account of a night at the skating rink that ends up in violence. Quence is at his best here, injecting the right amount of wordplay to keep battle-rap aficionados satisfied while at the same time creating an entertaining narrative.

One of the other standout productions on the mixtape is “Girls,” a grown and sexy affair featuring John Legend. The beat is infused with Latin dance-style rhythms and includes a subtle guitar riff. Legend’s tenor glides over the song’s soulful horns, and Consequence does a good job of simply being an emcee by rapping confidently over the beat with his carefree delivery and playful punchlines.

For all of his talent, however, Consequence’s growth as an artist seems to have stagnated. He tries his hand at singing choruses like fellow Queens rapper 50 Cent on “Burn A Bridge.” This effort yields a boring result. His voice simply doesn’t sound right when he tries to carry notes, and he fills this song with so many metaphors that any sort of point he’s trying to make gets lost in his lyrical shuffle.

Sparks supplies the mixtape’s worst instrumental on “Baby,” a song playing on the tired concept of baby-mama drama. Sparks’ beat is a jumbled mess that stings the ears with its shrieking vocal sample and misplaced organ loop. Songs like these exemplify Quence’s inability to expand his subject matter, which makes him sound so immature for an established emcee.

For all of its downfalls, “Finish What You Started” is still a notch above Consequence’s previous efforts on the mixtape circuit. There are stretches where Quence sounds totally at ease and performs like the battle-tested emcee that he is. He maintains his own when paired with other veteran rappers like Bathgate and GLC on separate songs, and together they create some of the mixtape’s brightest moments. Thankfully for GOOD Music fans, this is only a mixtape and they can still hope for Quence to realize his potential on his next actual album. Judging from this latest effort, however, accomplishing such a feat looks like an arduous task for the Queen-bred rhyme spitter.