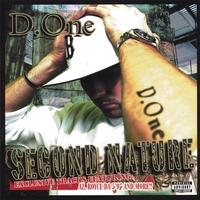 There are approximately 300 million stories in America, 6 billion in the world. The struggle of an artist is to tell his stories in a manner which those 6 billion people can relate to, while preserving their uniqueness. For an up and coming artist like D.One, the struggle is even harder; as endearing as the “struggling, starving, independent rapper” story is, it’s been told countless times by countless rappers. What separates D.One from the rest?

Unfortunately, not much. D.One is a good rapper. He is possessed with a near perfect flow, and a soft voice that is at once dramatic and unassuming. In a perfect world, “Second Nature” goes gold, because it’s a generally high quality album. However, the same could be said of the thousands of rappers trying to make it big. Where “Second Nature” ultimately fails is in separating D.One from the rest of the pack.

Perhaps, given enough of a spotlight, D.One could do just that. He is a truly compelling rapper on his own, able to effect great changes in emotive quality through subtle changes in his tone. The moment you put in the CD, the “Million Miles Intro” whispers into your speakers, you know that D.One is nice, and on “The Wait is Over” paints as vivid a picture as any rapper could.

“When the lights go down in the city, we still up tipsy
Flip a ten inch screen, the big willy, the dream
Look around, people are bucking, a plot is played
Parlay and double or nothing, staying mad humble
Arrogance struts though, it’s cut throat, killing to touch dough”

The problem is that he is only on his own for two of the album’s 13 tracks. And as compelling as he is by himself, his soft voice tends to fade into the background when paired with a more intimidating presence. This accounts for every guest on the album, a very nice line-up that consists of underground legends like AZ and Royce da 5’9, as well as local favorites like Krumb Snatcha and Lace Payne.

The last of those plays Ghostface to D.One’s Raekwon, and is featured on 7 of the albums 13 tracks. A poor man’s Kool G Rap, Lace Payne blazes through his verses, stealing the show from D.One with ease. His menacing presence, while giving a sonic depth and aggressiveness to “Second Nature” that it wouldn’t have had otherwise, inhibits the album as a whole, preventing D.One from establish himself as an artist.

Even so, when D.One is on a roll, the two can mesh perfectly. “52 Pickup Freestyle” has the two going back and forth over different beats, displaying the skills of both rappers. D.One isn’t a naturally aggressive rapper, but he can surprise from time to time, and over the thumping “We Don’t Play,” he stands tall even surrounded Minus, Krumb Snatcha, and Lace Payne.

But those moments are two few and far between. D.One does best on softer tracks (he completely overshadows AZ on “What We Do”), and too much of this is dominated by a production style that fits his guests better than him. He can pull off a banger every now and then, but not for half of an album. Otherwise, the production is very well executed. Each beat possesses multiple layers, and range from epic to extremely laid back.

Overall, “Second Nature” plays like a compilation of tracks, rather than a united whole. It is the sum of its parts, no more or less. Ultimately, it ends up being more Lace Payne’s album than his; it’s him who makes the greatest impression here. It hurts the album, because D.One is interesting enough, and entertaining to listen to, he just doesn’t establish himself. This doesn’t bode well for D.One, after all, how can you hope to stand out from the depths of rap’s underground, when you can’t stand out on your own album?