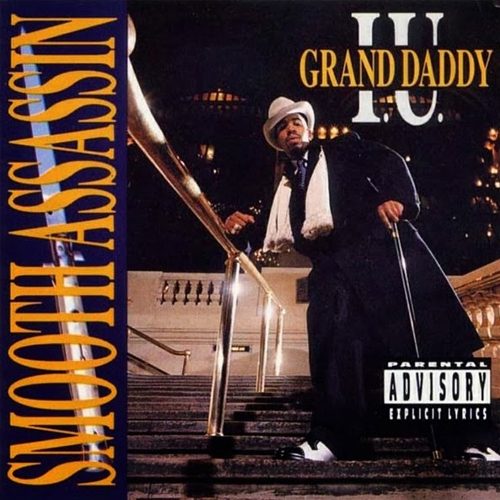 “Where are they now?” When Nas posed this question to hip-hop heads on his most recent album, he namechecked dozens of artists not heard from since the 1990’s including King Sun, Lakim Shabazz, Def Jef and Divine Styler among others. As much as I enjoyed this trip down memory lane, there was one artist I couldn’t help but notice DIDN’T get mentioned, one of the smoothest rap artists to ever come out of the once mighty rap powerhouse of Cold Chillin’ Records.

“A line around the corner, seven heads to a car means
The crowd is packed in like sardines
Security is tight for those who came to fight
I’ll jump on any chump who try to spoil my night
Cause I got plans for, girls on the dancefloor
Niggaz wanna know what I.U. stands for
The I is for in there, U’s for untouchable
And the shit you pop is just a bunch of bull
Everything is real, so bust a move
And remember… the U is smooth”

Rocking the same classic bassline Black Moon did on “How Many MC’s,” the self-styled mack Grand Daddy I.U. lays down the law on the opening track of “Smooth Assassin” and lets you know “The U is Smooth.” You might suspect that just from looking at his album cover, standing outside a posh event rocking a suit and tie, dapper from the slightly upturned brim of his hat all the way down to his polished tuxedo shoes. He holds a cane in his left hand and leans on a railing with his right, and the look of his face has the suggestion of “Yeah I’m a nice dude but if you cross me I can use this cane to whoop your ass.” That’s how it all comes together for Grand Daddy I.U., a man who sounds supremely self-confident in his approach to rhyme. The rich baritone of his vocals puts him on par with early 90’s contemporaries like Rakim and Big Daddy Kane, which ironically may have been a detriment to his career particularly given he shared a record label with the latter MC. Nonetheless I.U. strove to set himself apart as a rhymer when he opted to “Pick Up the Pace”:

“It’s like magic the way the rhyme flows
Smoother and smoother as time goes
On, soft and warm like the quiet storm
Cause this is poetry in the highest form
So check the technique, if you just said weak
Methods or efforts, then check till next week
You won’t find one, son, cause there ain’t none
Rhymes are artwork, now watch me paint one
Colorful rays in the shades of a rainbow
Can’t estimate the rate of my brainflow
Is it fast or is it slow?
If you wanna know – then pick up the pace”

Who’s providing the smooth tracks for the “Smooth Assassin” to rip on? Why none other than fellow Cold Chillin’ alum Biz Markie! Why the Biz has never gotten his as a producer I’ll never know, because I’m hard-pressed to think of a song he did for himself or someone else in this era that was a piece of shit. In fact his tracks bring out the best in I.U., giving the naturally braggadocious I.U. a comfortable platform to spit and talk shit. “Something New” illustrates this beautifully – a happy swinging piano backdrop and strong bass drum and snare pattern provide an ideal scenario for I.U. to talk shit with the best of them:

“Grab a seat and take heed to the entrepreneur
For, sure it’s raw, literature hardcore
I’m light but not white, quite bright, that’s right
A parasite who bite I’ll invite to fright night!
So let it be known, the rap throne I own; so
leave my bone and my microphone alone
I gets paid, while others get slayed
You’re goin out like a roach, I go out like Raid
I won’t back up or freeze up, slack up or ease up
Cause Daddy U is cold chewin MC’s up
I gets raw with the rhymes I develop
So all of you suckers, shut the…”

Hard to believe that with all this dopeness “Smooth Assassin” is only three tracks deep, but it’s safe to say almost all of the rest of these 17 cuts go the same way. It’s hard to argue with I.U. when he utters the words “I’m comin at you like a wild rhinoceros/Take my crown? That shit sound preposterous,” and then you look at the album and notice these words are heard on a track called “I Kick Ass.” That’s not bragging at this point, it’s the straight up truth. I.U. does it again and again, from the smooth horns and jazz of “Mass Destruction” to the heavy bass of “Girl in the Mall,” from the familiar funk notes of “Dominos” to the throwback piano rock of “Soul Touch”:

“Crystal clear, smooth and impeccable
I turn one rhyme into a record full
From letters to words and words to a sentence
I turn out shows for the hoes in attendance
So get up and shake your ass ’til your pants rip
Stay on a dance tip and watch the man flip
From page to page, paragraph to chapter
Straight up and down, no time for laughter
Cause I don’t play when it comes to this
I mean business, and I’m dead up serious
Cause this is somethin I don’t take lightly
You gotta be a damn fool to fight me
Cause fake MC’s and enemies get no points
Put up your dukes, if you want we can throw joints
And in the end you’ll agree
You ain’t even got half as much soul as me
I got soul in my ankles, soul in my hips
Soul in my back and soul in my fingertips
In my shoulders and in my wrist
I even got soul in my penis – I got the soul touch!”

DAMN SON YOU’RE KILLIN ‘EM. Even Rudy Ray Moore would have to admit that Grand Daddy I.U. is a smooth articulate pimp who would give Dolemite a run for his money. So whatever happened to rapper who described himself and his rhymes as “The most powerful shit ever known to mankind?” A lot of trial and tribulation for damn sure. He attempted to release a follow-up record in 1994 that received a lukewarm reception and very little promotion from a crumbling Cold Chillin’ Records. I.U. told AllHipHop.com that it all came to a head when “Big Daddy Kane got on that singin’ shit, that Barry White shitt. The label just went. That was it right there.” Less than a year later the equally loquacious East coast rapper AZ dropped the crossover hit “Sugar Hill” and was either paying tribute to or directly ripping off I.U.’s song “Sugar Free.” The samples are the same, the drum track is the same, and the hook is even sung the same way albiet with different intent. Peep the linguistics:

“Straight up and down on the serious tip
I ain’t with no relationship
It may sound like a diss but believe me it’s not
Matter of fact I really like you a lot
But it’s a dead issue for you to pursue
Cause yo boo, I like you but I like others too
The heartaches, the breaks, the pains, I don’t need em
Instead give me some head and a whole lotta freedom
I like to swing, I ain’t with no commitment
Parties, ladies and beer by the shipment
But when I do my thing you get mad
Call me on the telephone soundin all sad
Don’t mean to hurt your feelings, my dear
But listen here, I’m the mack of the year
So if you have plans to settle down with me
I guess you just have to be – sugar free”

If you have to ask whose track should have resulted in making him a household name, I.U.’s wins hands down, but AZ is the one with a decade and a half-dozen plus of records on the shelf. I.U. told UGHH.com, don’t miss your chance to cop this disc before it’s out of print again – you won’t regret it.