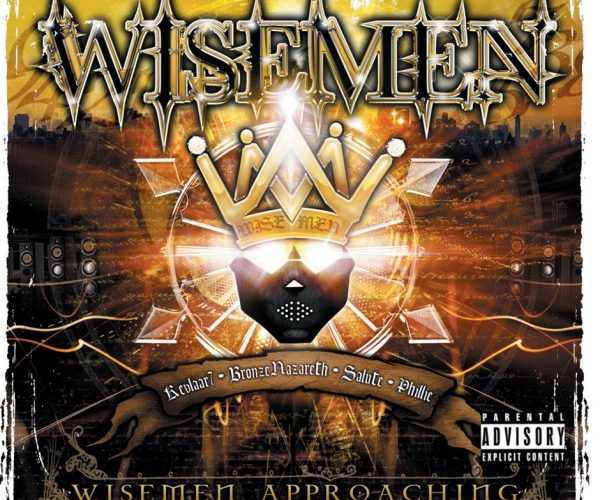 “Introducing a Wise man
I rise seven flights above life
Civilize the mic and my A-Alikes as I write
Breathe life inside the dead
Read the chiseled words, disturbed vision
Got me got grasping prison bars and flipping birds
If I get caught, my seeds will be fatherless
I run wild through the gauntlets
And flaunt shit my brothers died for”

From “Introduction,” the Wisemen’s stream-of-consciousness rhymes contain a sincerity and humility fitting of their name. With a take on rap that removes any sense of gloss or commercialization, the Wisemen’s beats and rhymes contain a raw sort of soul that isn’t too often seen in any genre. Though they may be here to elevate the state of hip hop, their music lacks the pretentiousness that this effort could have easily contained.

At the same time, it also lacks the excitement and significance the title of the album implies. The Wisemen are made up of Salute, Phillie, Kevlaar 7, and Bronze Nazareth; the latter two handle the production. Bronze Nazareth has been making rounds producing for Wu-Tang related projects (RZA’s “Birth of a Prince;” Dreddy Kruger’s Think Differently compilation), and his 2006 solo album, “The Great Migration.” His, and Kevlaar 7’s production interprets the RZA’s Wu-Tang production in a slower form, more focused on slow, aching vocal loops and woodwind samples than RZA’s generally harder edged and faster production.

Nazareth’s production, at its best, evokes a sense of nostalgia that is perfect for this project. Unfortunately, it is ill-suited for a complete album. His beats work best when few and far between, where they offer a stark contrast to most rap productions. Over the course of their album, they are stripped of this unique quality, revealed as one dimensional, and become monotonous. Kevlaar 7’s production sounds generally the same, and together, they make “Wisemen Approaching” a difficult listen.

This is mirrored by the Wisemen’s lyrics. While they are all good rappers, none of them are particularly compelling. No rapper has to answer the mysteries of the universe, but their lyrics aren’t particularly visual or visionary. Generally, they lack focus. Also, the production isn’t the best fit for the Wisemen. The slow, brooding production is better fit for rappers who naturally rap in a monotone, like a Masta Killa or Guru. While they can be serene, their voices and bare-knuckle street descriptions lend themselves to harder beats. The best sounding tracks come over their relatively pounding productions, as they rip the haunting “Mixture of Muhammad” to shreds:

“Guru of rhyme, voodoo guns big as Mtulu
I’ve ruled two realms, watch me cool off hell
My grill ain’t icy, but for real I get dicey
And slice three books into the gospel of me
Fifty states of mayhem, and mine breaks bread
Dread sky for the baseless, give me the brush to paint this
Aim phrases at faces, that mandated us nameless
Non-flavors are tasteless, the wind just takes it
I have a gift intended to uplift”

On its high moments, the potential and intention of the Wisemen are fully realized. The guests are solid; Killah Priest and Vast Aire join them for lead single “Iconoclasts” but GZA is placed on the only track on the album with a beat that doesn’t fit him, “Associated.” His verse is one of the best on the album, but he gets lost over Nazareth’s lone attempt to speed his production up.

Ultimately, the failing of this album is that Bronze Nazareth keeps using the same bag of tricks. His one-dimensional production keeps a united sound throughout the album, but prevents any singular track from establishing an identity. The group would benefit greatly from hiring some outside production. Until then, the Wisemen are a group that fails to distinguish themselves in hip hop’s massive underground scene.