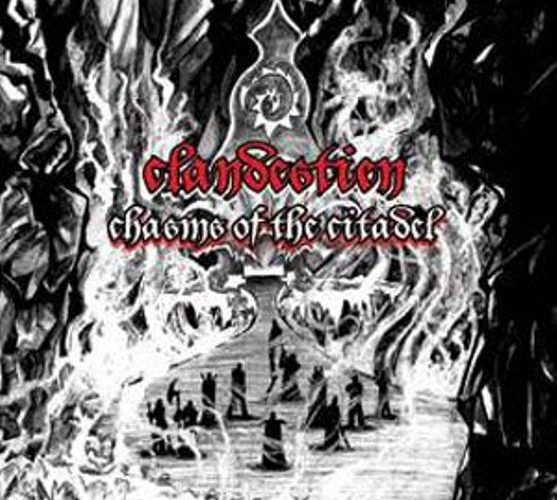 Clandestien :: Chasms of the Citadel

Australian duo Clandestien are in their own little world. The artwork on the album cover and liner notes looks like something straight from Lord of the Rings, so it comes as little surprise that the music itself is no different. Well, let’s just say the holy Tolkien trinity is a definite influence. The beats strive for a dark, epic sound, and the rhymes are fantastic, alternative update to your average “holier-than-thou” rap.

Calling it a gimmick would be inappropriate, but calling it a fresh take on the extremely played-out subgenre of underground battle-rhyming is way too nice. These guys are nerds. They’re violent, crude and act really tough, but when you continuously refer to yourself as a Sith lord, namedropping various components of some of the geekiest shit known to man, the shtick suddenly becomes difficult to take seriously. That said, it could certainly be called something of a Jedi Mind Tricks knockoff. Where JMT doesn’t really incorporate the science fiction element in their lyrics, the brutality factor is extremely prominent in “Chasms of the Citadel.”

And it is brutal. Emcees Tomahawk and Graphic are unnecessarily profane, often sounding more like a horror-core act than anything else. Decent punch-lines are to be found, but more often than not they prefer jabs more along the lines of “verbal diarrhea,” or of course, “cunt.” Soon they stagger into mindless, elitist bullshit, denouncing the mainstream like it’s still cool to do (maybe it is in Australia), and making up words in their battle rhymes. They’d like to believe they were on the brute/thug tip of a Sean Price, but when you know the Shire more than they you do the street, such fantasies remain that and nothing more. Taking things a step further, they want atheists dead. Feel the love.

Musically it works, not because the beats necessarily up the quality, but because they fit thematically. “Weaponry Music” is a menacing banger, eastern strings delicately moving about the guillotine snares, but elsewhere the sampling sticks to awful, boring loops. “Return of the Kings” samples Zaamfir’s “Lonely Shepard,” famously used in Tarentino’s Kill Bill, and they do a great job butchering a great tune. Producer Mortar, who handles the majority of the album, definitely listens to RZA, as his dark, organic beats strive to sound very Wu, but they consistently fall flat. The vocal excerpts range from tactless to plain stupid, like the Michael J. Fox sample in “Future to the Back.” And no, folks, that title doesn’t make any sense. It isn’t you.

“Her Choice,” an extremely dark tale of a struggling couples’ abortion, is the one instance on the album that Clandestien achieve the grim state of mind they continuously reach for, and they actually do a superb job. Alas, they immediately get back to mindless battling, and never look back. “Chasms of the Citadel” is an album meant to be taken seriously, but coming from a pair who clearly take more lessons from George Lucas than Rakim, shit ain’t sweet.