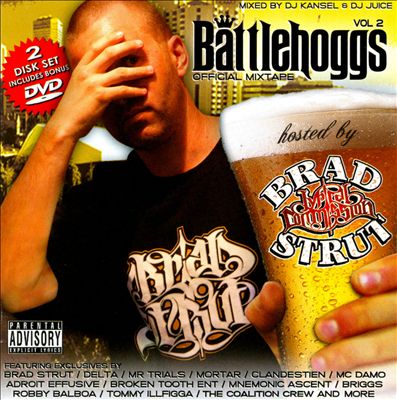 When you think Australia, you may not automatically think hip hop, but they actually have a decent home-brewed scene. This mixtape features some of the rappers and crews associated with Shogun Distribution, including but not limited to Delta, Billy Bunks, Clandestien, MC Damo, Adroit Effusive, and Tommy Illfigga. Brad Strut hosts the mixtape, providing both some exclusive tracks and the prerequisite between-track banter. Most of the tracks are exclusives, but a handful have been previously released.

Australia has some impressive beatmakers, and several of them make appearances on this disc. Prowla, Bva, Beats, Concepts, Chris Bass and Mr. Trials all offer up solid beats, and Mortar and Tommy Illfigga both offer beats and rhymes. For the most part, the MCs keep up, offering some solid rhymes and impressive wordplay, all with thick Aussie accents.

There are several highlights on this album. “The Coalition Crew’s Free Enterprise” has a jazzy beat that is more NY than AU; Delta offers up some conscious rhymes, rapping “They say chill like my city is nice/While our crackheads suck glass dicks or ice”; Tommy Illfigga offers some impressive verbal calisthenics on “Common Sense”; Briggs drops some nice bars over beats straight out of “The Chronic;” and Soundbombers show off their old school flow over a beat that sounds like vintage Eric B. American MC Sean Price even shows up on “Automatic,” dropping some decent rhymes despite sounding half awake.

As with any mixtape/compilation, not all of the tracks are stellar, and the quality ranges from pretty good to pretty average. My biggest complaint with this disc is that several of the MCs yell their raps in an attempt to build intensity and energy, which I found more annoying than banging. At lot of this has to do with the rough and rowdy vibe of the MCs, who mix the aggression of heavy metal and punk with the aggression of hip hop (this is the land that gave us AC/DC, after all). As with every mixtape I’ve ever listened to, I found the whole host thing is irritating. The last thing I want when I’m listening to music is some dude screaming promos and telling me that I’m not ready for them.

The mixtape also includes a DVD with videos, interviews, and live performances by the rappers featured on the disc. It is worth watching for Billy Bunks “Devil’s Clay,” in which he flings shit at unsuspecting passers-by, and Maggot Mouf’s “Animal Instinct,” in which he raps in a zoo while watching baboons have sex. There is also a good interview with Clandestien, and an interesting piece showing Bva constructing a beat on his MPC.

Anyone who thinks that the U.S. has a monopoly over hip hop should check out this mixtape. It’s proof that the Aussies have the beats and rhymes to compete with Americans. Fans of global hip hip can rejoice that yet another region of the world is churning out impressive music, and American MCs should take it as a challenge to step their game up in order to stay competitive in an increasingly global marketplace.