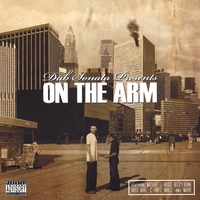 Dub Sonata :: On the Arm

I listen to a lot of underground hip hop, and I have a particular penchant for what I call “producer albums,” records that take the art form back to when the DJ defined hip hop music. I like these types of albums because I’m a little more picky about beats than rhymes, and I also appreciate lyrical variation (think Inight’s “Solo Plexus,” but not that extreme). Additionally, the array of chosen rappers gives a voice to the producer’s preferences and beliefs. So when I began to review Dub Sonata’s “On the Arm,” I was pretty baffled as to why I hadn’t heard of the producer before. And I was pretty excited to get into the album.

Dub Sonata is a New York-based producer who has produced mainly for the mixtapes of local rappers with a gangster leaning. I’m not really going to state my feelings on mixtapes or gangster rap, besides to say that this fact explains why I hadn’t heard of Dub Sonata. At the same time, he recently worked on C-Rayz Walz’s “The Dropping,” who, along with Vast Aire and other guests, appears on Dub Sonata’s solo record.

“On the Arm” forgets introductions and jumps right into the album with Rich Mo on “Do What You Do.” Skipping turntable acrobatics that might traditionally open a record, this track dictates the cyclical depression pervasive in the ghetto and acts as a dedication to its inhabitants:

“Yo, this ain’t all about hustle, this about watchers and doers
This about the working class compared to entrepreneurs
Y’all puttin ya’ll selves in jail with a 40-year sentence
Cause you gotta be over 60 before you can receive a pension
[…]
This is for my pimps that’s pimpin these hoes
This is for my hustlas that hustle to get dough
This is for my gold diggers that dig gold
Just so they kids can have Christmas and git clothes”

The head-nodding beats continue on “Wake Up,” showcasing Double A.B. over a heavily stuttered piano and an underlying schizophrenic beat that molds and pushes forward the lightly sampled vocals.

The real stand-out track from the first half of the album dominated my repeat button for three days: “The Sermon” featuring Nature. Not to say that Nature doesn’t bring some good lyrics, but this beat is so serious that I could listen to anything spit over it. Think simple, soulful gospel sample meets some sped-up reggae bass line and a powerful boom-bap beat. The listener finds Nature spitting some hot lyrics:

“Pullin out a gun really don’t make no sense
You gotta be smart dog, you gotta be careful
Every new drug out gotta be sampled
I take you out your misery, set an example
Leave you in Bellview, leave you abandoned”

These lines hit so much harder as they fade into the soulfully haunting background of the choir.

Not to let the previous negativity and seriousness ruin the mood, “Young’n Filthy” finds a care-free Billy G delivering the requisite braggadocio and cleverness:

The following beat-heavy esotericism, digital manipulation, and minimal secondary instrumentation on “Hit Em” compliment the traditional Vast Aire delivery perfectly. “As Far As” finds Moondoc rapping over a simplified piano sample and a casual bass line. Again, it’s the unrelenting boom bap that keeps the listener in tune with the track; a more separated or slowed-down drum would risk putting him to sleep.

Double A.B. gets political, delivering some of my favorite lines on an uplifting, serious “Revolution.” The following three verses intertwine with a choir’s ever-heightening call for “revolution” to create a spine-tingling build up:

“It’s like world peace in the war of the worlds
A good day on a bad month, oysters and pearls
When you starving, a pearl ain’t worth a coin on the curb
But if you eat a spoiled oyster, you hurl

The choices are real, you rather have a Rolls-Royce or a meal
A Porsche or a portion of veal
That ill mansion up on the hill might have cost you a mil
But what’s the point if you can’t afford the cost of the bills?

The instrumental album closer, “Greatest Love,” shows Dub Sonata drawing comparisons to Prefuse 73. The transient vocals and drum line inject a type of Marco Polo influence as well. But it never quite fades out or calms down to become electronica or trip hop. Dub Sonata may produce some relaxed effects, but the drum section will always prevent him from being placed in the aforementioned categories.

“On the Arm” is an interesting record. Pseudo-repetitive cymbal crashes and unnecessary drum busyness peacefully exist next to soulful instrumentation and driving bass lines. While one rapper may brag of his prowess and ice (“No Sir”), another tackles US domestic policy and the ills of the Bush administration (“Revolution”).

Occasionally the beats are very busy and don’t really allow lyricists to expand and unfold over them. Although this is a producer record, a beat needs to breathe (which explains Marco Polo’s success). Dub Sonata sort of competes with this producer, as well as other prolific up-and-comers like Chops, Jon Doe, and Snowgoons. Other producers who have put out similar records, though who exhibit different musical styles, include Mums The Word, Maker, and Wax Tailor. In the field of these talented producers, “On the Arm” comes in with a strong showing. Dub Sonata definitely has a good reason to wear his happiness on his sleeve, or wherever else he plans to show off.