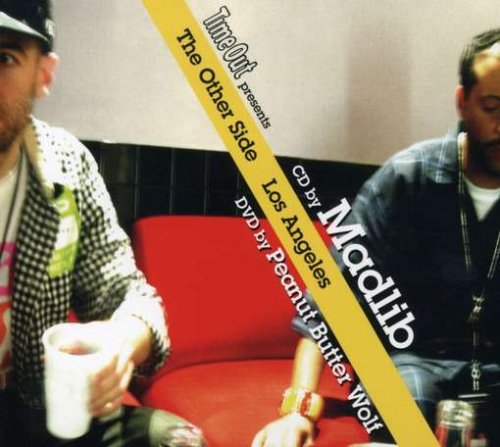 Madlib :: The Other Side of Los Angeles

Wow, a double-disc album, 1/2 a CD presented by top-notch producer Madlib and the other a DVD presented by DJ-extraordinaire Peanut Butter Wolf. There’s no way this can go wrong, right!? I was excited by the prospect of a new Madlib CD, as anyone that loves underground hip-hop and acknowledges the scope of his production genius in recent past would be, but that is not what I got. The cover says it, right on the front, Time Out presents CD by Madlib/DVD by Peanut Butter Wolf–a very thoughtful way to get unsuspecting fans of these two to look and listen.

This double disc creation is like going to a video store and renting something like “Hostel”, because it says ‘Quentin Tarantino presents’…in very big letters, without noticing the continued statement, ‘an Eli Roth’ film. You get home, pop it in, and are disgusted to learn that it is really from the same guy that cheated you out of your money with “Cabin Fever” (even though you should’ve known better in the first place). Quentin Tarantino’s name is only on the box as the producer who fronted some of his millions to help put the slop out. Hopefully, this isn’t too convoluted, because the point is this, DO NOT LIE TO YOUR CUSTOMERS! In this case, the culprit is a combination of Time Out (of magazine and guidebook fame) and the label, Deaf, Dumb + Blind Recordings..

The actual material of the album isn’t all bad, but mostly it will not appeal to many people, including those faithful fans of Madlib. This becomes immediately apparent with the opening track, “Energy Control Center” by Lightmen Plus One, which was originally recorded in 1972–It’s an interesting track as it does set kind of historical landscape for hip-hop music. The song features tense cymbals, horns, and a distortion noise that sounds like a single passenger airplane flying overhead. This sporadic music is reminiscent to the jazz flute scene in the film “Anchorman”, eventually it becomes painstaking.

Next, we are thrust a whole decade forward into an early 80’s sounding track entitled, “Clear”. “Clear” is a breakbeatin’ funkfest complete with Robotic vocals in the background. It’s the straight cheese-ball music that it is described to be. This is the point that one will start to worry…

Luckily, one of the acceptable tracks follows thereafter. Dabrye featuring Jay Dee and Phat Kat bring their ‘C’-game to the table with “Game Over”. These mediocre additions proves to be much better than the other lesser known, and more eclectic artists offerings. This continues to be the case as the album trods its path of disappointment. Other fair, to non-blasphemous performances come from Lootpack homey Quasimoto on “Greenery”, The Freestyle Fellowship with “Park Bench People” and MED ft. Poke who bring us “What It Do”. Nonetheless, with the lineup just mentioned it has to be noted that they all give us, relatively speaking, throwaway tracks.

Madlib ultimately produces 5 of the 17 tracks on this album, but nothing holds a candle to his enlightening work on “Madvillainy” or “Liberation”. This accounts for most of the hip-hop tracks, whereas Lee ‘Scratch’ Perry and jazz consciousness ‘originator’ Sun Ra Arkestra add their musical slices to the mix. The album is extremely varied, but the quality remains unsatisfactory throughout, possibly for that reason. There is never a clear direction as to what the album is trying to achieve. It is hard to say how much artistic control Madlib had over what tracks were picked for this release. It wouldn’t surprise me if they were all hand-selected, as usually producers tend to have obscure musical tastes after years of crate digging.

Since it has been mentioned that Peanut Butter Wolf has his own ‘involvement’ in this project, it must be expanded upon. Basically, the DVD aspect of “The Other Side” is like an Entertainment Television tour guide to the city of Los Angeles. Like “Time Out” itself, this tour guide shows the counter-culture of Los Angeles with visits to a comic shop and many thrifty-looking clothing stores. Peanut Butter Wolf doesn’t work any of his scratches or cuts on here and though there is music in the background, it is certainly not the focus. PBW is often very awkward in front of the camera, which explains why he is a DJ.

Deaf, Dumb + Blind Recordings may be the perfect plateau for this release as the minds behind it are likely deaf and dumb at the very least. Think long and hard before you decide to purchase an album on the merit of who presents it. Madlib and Peanut Butter Wolf will always be great artists in the eyes of legions of fans, but this CD/DVD combo is not the project to prove their worth in the hip-hop landscape and legendary Los Angeles status.

Madlib :: The Other Side of Los Angeles
3.5Poor
Music3.5
Lyrics3