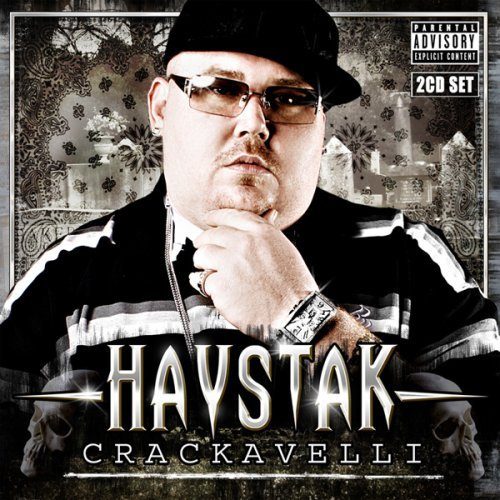 A double album is a lot of meat to chew your way through, and much like sitting yourself down in front of a 20 ounce porterhouse it requires the right mental preparation. You can’t fill up on the bread or the rolls. Avoid the really big appetizers unless you have a tablemate to share them with. When your food arrives, ignore the mashed potatoes and the vegetables completely until you’ve polished off at least a third of your steak. This is the voice of personal experience on how to avoid doggie bagging leftovers. Steak just isn’t good when you reheat it – all that juice has run out and it becomes dry and leathery. There’s no science to any of this, but if you like the big taste and don’t have a big stomach to match, it’s the strategy I recommend.

Haystak may not have to skip the rolls and the mashed potatoes. While the Nashville, Tennessee native may not be quite the size of legendary wrestler Slim Thug either. When Jason Winfree walks in the door of an “all you can eat” buffet, the manager probably has an eye on him. “Big ‘Stak; don’t get it twisted, I was once a little homey too.” Those words on “Boss Status” from the first disc of “Crackavelli” were undoubtedly a reference to his rap stature as opposed to his physical one, but Haystak’s not shy about it or his caucasian background. In fact one of the most endearing qualities of 2004’s “Portrait of a White Boy” was his unapologetic honesty and wry sense of humor about the fact people would doubt him before even getting to know him.

With a title like “Crackavelli” it’s clear he hasn’t lost that sense of humor, but it’s also an indication that Winfree would like to break through the regional glass ceiling and achieve the international fame Tupac Shakur did before his demise. Nothing on either disc of “Crackavelli” though can be called “crossover” in the traditional sense. On “Reloaded” ‘Stak is more concerned with credibility than crossover: “Now I’m so deep in it that I can’t even get out/Fuck ’em I would rather be underground, I ain’t fuckin around.” Street Flavor Productions couldn’t let him sell out even if he wanted to, producing the entire album save one track with beats so hard they give ‘Stak a superiority complex to look at other MC’s and utter “You Soft”:

“I’m hard like accomplishin a motherfuckin pipe dream
Hard like LL, back when he was 19
Hard like concrete, won’t back down
Standin strong, and I ain’t gon’ crack now!
Hard, like Mike Tyson at a Cover Girl convention
Hard, like R. Kelly at a double dutch competition
Hard, like Mission Impossible, impossible missions
Like fuckin ugly bitches in the missionary position”

The symphonic strings of the instrumental and the sense of humor make Haystak a winner here, taking what could otherwise be boring braggadocious hip-hop thuggery and elevating it to high art. The same can be said throughout two discs of raw Tennessee raps that are laced with a surprising amount of hip-hop history and perspective. “Track 7” is an ode to hip-hop groups like U.G.K. who went gold without radio play, and not surprisingly Bun B stops by for a well timed cameo (shame they didn’t mention it on the album’s cover). “Nashville” will have the “pick-up trucks, 26’s and on up” bouncing up and down the streets to the beat while ‘Stak shows his pride by saying “I embrace this place, I wouldn’t disgrace this place.” Here and there ‘Stak will slow it down a bit on tracks like the piano-informed “Angels” and the smooth rolling “Drive,” which is reminiscent of Baby Bash for all the right reasons. There’s no doubt where he’s coming from though figuratively and literally once you hear “Excess Weight”:

“I make that heavyweightin, interstatin mash music
Quit all that hesitatin, boy that get that cash music
Get it how you live (yeah) how you live, get it
If you got a problem with it, see you up in a minute!
Hit it and quit it, forget it, I’ve been in it for minutes
I worked my way up in it went from private to lieutenant
Got the windows tinted, but they know who’s in there
Year after year, we come back like swimwear”

Haystak is serving a big thick slab of Southern hip-hop on “Crackavelli,” with a side of garlic mash, a basket full of rolls, and a big bowl of sautÃ©ed mushrooms. With 30 tracks to chew through not every bite is going to seem like the best steak you ever ate, and in fact it’s more than likely you are going to have to doggie bag some of it for later. That’s okay though because Haystak’s music and lyrics are well-seasoned and have enough flavor to survive being digested seperately. Juice runs out of a t-bone sooner or later, but “Crackavelli” is digitally preserved to keep the freshness locked in. The biggest problem Haystak faces is that Paul Wall and Bubba Sparxx have already locked up the market for hardcore caucasians from the South, and Haystak may if anything be too honest about his background. He’s fat, white, straight and straight out of Cashville, Ten-a-ki; and more than willing to say FUCK YOU to anybody who will judge him on that before they judge his rap. Much respect to Haystak though even if he never hits that 2Pac level of fame because records like “Crackavelli” are what hardcore hip-hop heads will listen to while everybody else bumps “London Bridge.”