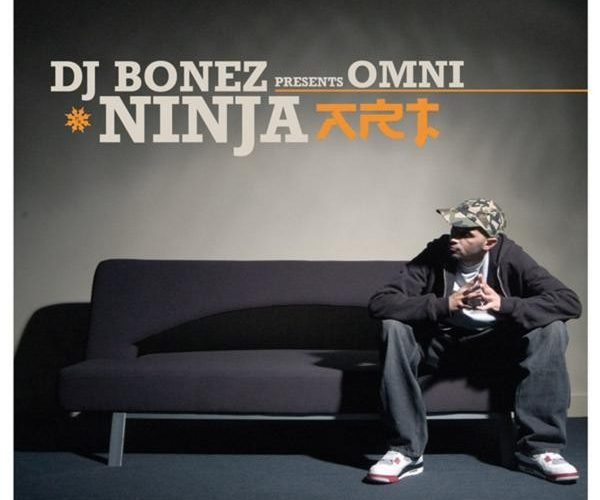 “Ninja Art” is a terribly misleading LP. First thing’s first: this album will not teach you how to engage in feudal Japanese combat. The opening lines mention both light sabers and Darth Vader, but Aussie producer DJ Bonez and Los Angeles-based emcee Omni aren’t on some sci-fi tip, either. The cover, which shows Bonez on a couch by himself; Omni nowhere in sight; might be an interesting take on the album. Maybe it’s illustrating their ability to make an album from continents apart, but it would make sense to put the star up-front.

Not to suggest that the rapping is sub-par, because it isn’t. West coast rap has seen its better days, for certain, but Omni, who sounds something like a higher pitched version of Del the Funkee Homosapien, knows how to ride a beat. At their bests, the two can make for a good tag team, especially when they don’t try to get overly complicated. “Hide the Dope” is an anthem, Omni sounding off to scramble up before the narcs come. Bonez’ beat, a jazzy, piano number, is probably too soft, but it works, even if it feels like a remix.

“Jump Around” might start off like a hellish hip-hop/Sublime mash-up, but Omni sounds extremely natural over the reggae beat. Mr. Jamalski, as pleasant as he sounds adding his dance hall vibe to the track, is unfortunately unintelligible. “Raindrops'” epic strings show shades of “Black Republican,” but it’s a bit overwhelming for the emcee. Bringing out Omni’s “introspective” side, big words and elaborate concepts suddenly ooze from an unknown source, but he’s not Aesop, much less Aesop Rock

Bonez’ beats are jazzy and ridiculously smooth, his ability to layer samples often impressive. His sporadic percussion elements (snaps, claps, chimes) might remind some of Dilla, but just as often it screams DJ Quik. Sometimes he’ll transition into the epic boom-bap of an RJD2, only to slink back into a smooth 70’s break style of a Cut Chemist. “Shadows,” with its warm saxophone and mega-funky, DJ Shadow-like jazz groove, coincidentally follows up “Fade Away,” which flips the same sample Josh Davis used for “Midnight in a Perfect World.” Bonez’ knack for gorgeously subtle, ambient loops is the highlight of the album, but unfortunately, Omni’s up-tempo west coast style doesn’t always mesh.

“London Lives,” a simple, heartfelt tribute to the terrorist attacks in London and New York City, gets the point across, but the title of the song is the gist of the overall message. The unnecessary Spanish of Pee Gonzales on “Cop This” is frustrating (why am I seeing so much of this?), and Australian MC Mell ‘O,’ who sounds sort of like Dizzee Rascal, is much more appropriate over Bonez’ quirky “Surprize Attack” than Omni (“why you holdin’ on my nuts like a hubcap?”).

The DJ Grazzhoppa remixes of “The Hot” and “Hide the Dope” are both arguably better than the originals, seeing they fit Omni’s style even better. On the latter, Grazzhoppa flips the same frantic sample Dilated Peoples did for “Who’s Who,” greater emphasizing the lyrics. Omni would clearly be better suited with E-Swift funk with his voice and presence, although he doesn’t sound bad at all here.