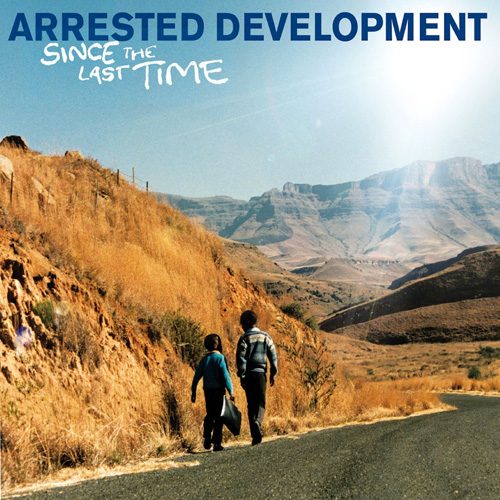 Arrested Development :: Since the Last Time

Many of hip hop’s greatest artists, especially from the 90’s, are haunted by their great first albums. From “Illmatic” to “Only Built 4 Cuban Linx,” rappers who create truly epic first albums are constantly expected to recreate that first moment of magic, and yet somehow expand from it. It’s a test that few careers survive, and few still completely overcome. Even after thirteen years in the game, Nas’ new releases are still compared to “Illmatic.”

So to get it out of the way â€“ this is not “3 Years, 5 Months, and 2 Days in the Life of…” This just doesn’t measure up to that raw energy, very few albums have in any genre. Speech isn’t as natural, the beats aren’t as earthy, and there isn’t a song on here as instantly catchy as “People Everyday (remix)” or as personally stunning as “Tennessee.” If you can’t accept that, then this probably isn’t for you.

However, take this out of the massive shadow that their first album creates, and you’ll have a very good, catchy album filled with honest positivity. “Since the Last Time” won’t blow up on the radio, and it won’t be your favorite album ever. But it’s overflowing with good beats, strong rhymes, and catchy hooks. Speech is on top of his game; he can get a little preachy at times, but he’s one of the nicest vocalists in hip hop and a very good lyricist as well. He won’t blow you away with his technique, but the simple happiness he takes out of life is a joy to listen to.

The production on this record isn’t always great, but the natural sound it has is. “Since the Last Time” has an easy swagger fitting for a group with a fifteen year recording history. Every once in a while, it tries too hard to have fun (“Harriet Tubman would tell you to… get down”), but it’s generally very fun without being corny. The hooks are all smoothly placed, shifting in between Speech’s raps, sung choruses, and straight up instrumental bridges without seeming to need much of a transition. The beats are very well executed, and draw from a fascinating mix of genres, instruments and sounds.

“Since the Last Time” doesn’t come across without some hiccups. The production is consistent, but very rarely better than “nice,” though. It can also sound oddly electronic for an Arrested Development album on songs like “Since the Last Time” and “Inner City.” Songs like “Miracles” and “Down and Dirty” are decent, but seem to be forcing a party atmosphere.

Speech’s raps are also a mixed bag. Most of the time, his positivity is refreshing in the simple joy he expresses at life. He can also be complex and insightful: “Sunshine” examines love across races, while “It’s Time” dissects the mind state of the ghetto. On the other side, over the whole album, his positivity can get tiring much in the same way a whole album of killer or gangster posturing can be tiring. Speech’s lyrics are a refreshing change from the negativity that is prominent in most hip hop, but he can occasionally use his positivity to shroud a lack of content. Generally, it isn’t a problem, but songs like “Miracles” and “Stand” can be almost syrupy in their sweetness. However, on songs like “How Far is Heaven,” his depth of personality shines through the brightest:

“From church to liquor store, we search for healing
Big, crowded world filled with lonely humans
I’m an MC battling with melody envy
‘Cause melody is the only thing that seems to soothe me
So we, rock organs, adjust the beat
Having folks clap to the rap
Taking it back to the color â€“ purple church
Where ladies shop joy in the midst of hurt
Revolutionaries had a curled fist at first
Then, years pass and it turns to a grasp
They ask in the midst of all:
‘God, show me a way to resist the fall'”

Its flaws aside, “Since the Last Time” is still a great album. Yes, it pales in comparison to their debut, but that’s true of all but a few hip hop albums. It’s consistent, creative, intelligent, and above all, extremely fun to listen too. Arrested Development is still operating firmly within their niche of positive, uplifting hip hop, and they posses all the expertise of a group in a fifteen year journey. “Since the Last Time” is not only great for its operating completely outside of Rap music’s stereotypical boundaries, but because it is in itself a great and imminently entertaining Rap album.