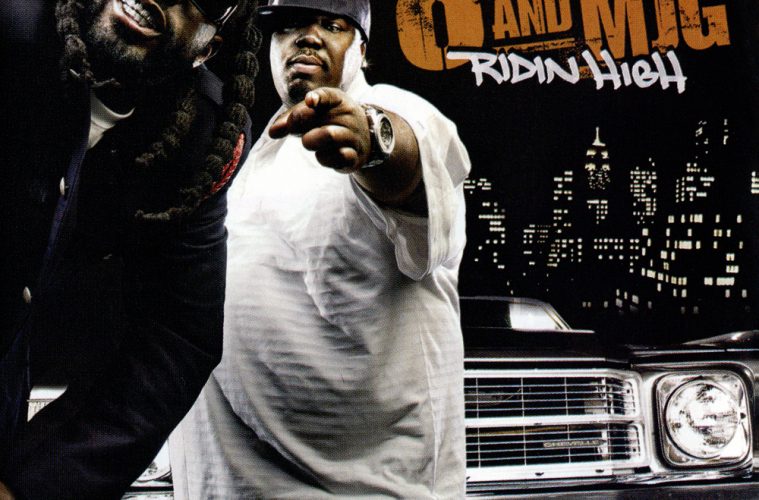 If I may break the fourth wall for a moment, I’d like to personally speak to all of you reading RapReviews.com and say THANK YOU – you and you and you over there too. Writing about hip-hop may at times seem like mental masturbation to the members of the staff, and we could even be accused of needing the platform this website provides just to hear ourselves talk, but at the end of the day what matters the most is providing a good (and FREE) service to our readers – the long-time fans, the first-time visitors, and everybody else in between. For that reason I’d like to personally apologize that the review of 8 Ball & MJG’s new album “Ridin High” was delayed by over two months. While RapReviews.com has garnered a strong reputation for the quality of our reviews, interviews and news over the last seven years there are still a few labels left out there who front on giving us “service,” industry speak for sending out promotional copies of albums for review. Let me be perfectly clear – when a label services your radio station, magazine or local nightclub DJ that means you get EVERY IMPORTANT RELEASE. Even if Bad Boy Records has sent us a CD at some point, and honestly in the last seven years I have a hard time recalling one I or somebody on staff didn’t buy one out of pocket, they would certainly fall far short of what one could call “service.”

To cut through the bullshit and get to the point, the policy of this website has always been to focus on what we DO get service on first. Thank you to all the record labelswho have supported us over the years. To Bad Boy Records, no thanks whatsoever. In fact both 8 Ball & MJG might want to put a foot up their label’s ass. Historically one of the South’s most important rap duos, a team that can rightfully be called “Living Legends,” should be absolutely furious about the shitty job their Bad Boy South division did promoting this album. While the album debuted at #8 on the Billboard charts and sold 50,000 copies the week of March 13th, the album quickly dropped off the top and has sold that same amount IN THE TWO MONTHS SINCE. Think about that for a second – if Bad Boy could have maintained that strong debut this album would be gold by now and on its way to platinum. That’s not unique territory for this storied duo, who’ve had gold and platinum records going all the way back to 1993 when they were on the tiny Suave House label. That suggests that 8 Ball & MJG do a better job of promoting themselves than any record label can do for them, and their new album “Ridin High” is the proof. Bad Boy has distribution on lock coast to coast for any Diddy CD or posthumous Notorious B.I.G. release, but trying to find “Ridin High” in stores was like looking for the proverbial needle in the motherfucking haystack. I wasn’t even aware the album was IN STORES until the loyal readers of RapReviews.com started to ask why we hadn’t covered it yet. To me that suggests an incredibly shitty level of publicity on Bad Boy’s part getting the word out, which means that first 50K in sales was their hardcore loyal fans that would have bought the album even with no publicity on the tiniest imprint label imaginable. 8 Ball & MJG deserve better than this, so perhaps Bad Boy should pull out pen and pad to “Relax & Take Notes”:

8 Ball: “M-E-M-P-H-I-S
I’ma rep this hurr ’til I walk up on death
My demise ain’t nurr don’t hold yo’ breath
Cook heat over beats so I’m somethin like a chef
Purple kushes, my bitches wax off they pussy bushes
Eat dick like it’s delicious, and grant a pimp wishes
She dig my country talkin, she say I sound funny
Embassy Suites, sittin on the bed, countin money”

MJG: “Fuck it I’ma blast off, take my mask off
Blow yo’ fuckin ass off, give me the cash cause
M-J-G not playin no games
If you not speakin good don’t be sayin my name”

Punctuated by a Project Pat cameo and a Notorious B.I.G. sample from “Dead Wrong,” DJ Nasty & LVM’s beat is the kind of hard-hitting rough and rugged beat one would expect the slow-flowing 8 Ball and gruff-voiced MJG to ride on. As always they sound natural in tandem, like Erick Sermon to Parrish Smith or Rakaa Iriscience to Evidence. Despite being signed to what’s largely a Northeast label (what other Southern rappers can you name on Bad Boy South – NONE) the group stay true to their Southern roots with both trunk-rattling beats and cameos by their compatriots. Killer Mike drops in when he’s “Runnin’ Out of Bud,” Juvenile and Jazze Pha beg “Pimpin’ Don’t Fail Me Now” on their time to shine, Yung Joc just wants to get his “Clap On” and Pimp C poses a question to all the haters out there – “Whatchu Gonna Do”:

Pimp C: “Too many clones in the streets and on the microphone
Pussy-ass niggaz need to leave my legacy alone
Cause I’m a motherfuckin king in that Texas
Don’t hesitate to put that thang on them plexers
Cause it ain’t no thang to lay yo’ lump off in yo’ lap boy
Hit his figure with the trigger, scratch off in the toy
Fuck me, not a chance nigga fuck you!
You want a war? It’s whatever you bitches wanna do”

The biggest of all cameos though may be the Midnight Black produced “Cruzin’,” which has that oh-so-curious mixture of uptempo flows and triple speed percussion matched with a really slick symphonic backdrop perfect for crossover radio play. The only thing more curious is the mixture of guests – Slim from R&B group 112 singing the hook, while Three 6 Mafia take over the second half of the song and thug it out with their own unique brand of pitching woo:

“I hit her up on Blackberry
She see the e-mails from daddy
She know it’s time to shake her man and meet me at the hotel
And see he her old head
With some old bread, eep her fed
But I’m the one she call when she need that ass tagged”

When you’re out cruising the streets, 8 Ball & MJG are the ones you call to tag your ride with banging beats and rhymes. They are unapologetically hardcore down to their Orange Mound, Tennessee core so you either “Turn Up the Bump” and roll with them or “Get Low” and get the fuck out of the way. Even on a song with a seemingly innocent title like “Hickory Dickory Dock,” Shawty Redd breaks them off with a track full of brassy horn stabs, high pitched crunk trills and the MJG chorus brags about females providing a “service” of their own “all, day, e’ry, day, three-sixty-five, seven days a week”:

8 Ball: “Patron, double shots, with no chase
Sticky green, fire it up and blow it in your face
We deep, 50 deep, so don’t hate
Forever never slippin naw pimpin we straight
What it do, the best back, the check’s fat
The track tight, we fin’ to cook a fresh batch
Money makers – you makin money, then show me some
Dime pieces, bend it over let me see your thong”

There’s nothing PG about 8 Ball & MJG – they wouldn’t have it any other way and neither would their fans. Despite their unapologetically hardcore lyrics there are plenty of songs on “Ridin High” that could be pushed to the top of the charts based on their charisma, which they freely and successfully trade for more complex lyrical topics and delivery. Any label not taking advantage of that charisma and pairing them with producers who can deliver beats for them to shine on is a fool. Bad Boy got it right with the music. Any label not taking advantage of those great beats and charismatic rhymes by promoting “Ridin High” to the moon is even more foolish. Suffice it to say Bad Boy South is 1 for 2. I have the sneaking suspicion that if Diddy, Slim and Yung Joc weren’t on this album it might never have made it into stores at all. Bad Boy doesn’t really give a fuck about the South despite what the name on this CD may claim, and that’s really a damn shame. Don’t let one of the South’s longest running and most important hip-hop acts fall off because they’re signed to a label with no time to promote their own albums. Diddy may be too busy designing Sean John’s fall fashion collection to care, but RapReviews.com wants you to know “Ridin High” is an album that delivers on the name and will give Dirty Dirty fans a nice buzz for a lot cheaper that a bag of that chron’.