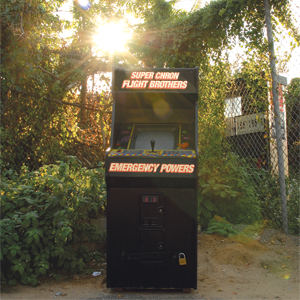 To be blunt (no pun intended) marijuana inspires a lot of rap music. From the Wu-Tang Clan to Hieroglyphics, it contributes to everything from the creation of the music to its topics. However, it’s not often that you see as prominent a reference as naming a group “Super Chron Flight Brothers” (the “Brothers” part refers to Billy Woods and Privilege, the group’s two rappers). As the name says, this is a group that gets really, really high.

Whether or not they smoke weed would usually be irrelevant, but it’s such a major theme of the group and this album that it would be remiss not to mention it. The marijuana use is here is readily apparent â€“ there are times where they seem to be trying to make a point or maintain a narrative, and then either just trail off into one-liners or completely different stories. There are a number of clips from speeches and movies that seem to have absolutely nothing to do with the song they’re on. Even so, “Emergency Powers,” isn’t so smoked out that it loses appeal to sober listeners.

Lyrically, the Super Chron Flight Brothers are pretty good. They’re not particularly good at rhyming; the point is on the concepts and content of what they’re saying. Although they have some freewheeling tracks (“European Safari” stands out), most of their songs have a very serious tone, both in lyrical content/delivery and production. Songs like “Slaughterhouse” and “Rent Control” tell somber stories of struggle without being pedantic. The latter is one of the album’s better performances, something of a critique of the male mindset over a haunting production:

“So when he never loves a bitch
I see a little boy ashamed his mom’s on that shit
On that strip!
And even when she was real sick, daddy ain’t never call
That’s your favorite trapper slash rapper
The one who keep word in the streets, the one who ball
The merciless gun clapper who’s team run deep like a marathon
Gangsta all day long, but let the police get at him
Mouth open like the amazon cause
When those crackers get you it ain’t no rap song
It’s lonely birds, fair-weather friends, tears from mom
And a hardness in the eyes of your kids!”

The production fits the words excellently, crashing at some points, wailing at others, usually gloomy in its feel. Songs like “Panama Red” feel as if the apocalypse is coming. Even on lighter songs like “Adamantium” (featuring Cannibal Ox), the production is spare, metallic. Most of it is very good, very dark, and definitely unique. It’s not quite bass-first, but it almost uniformly lends itself to big, booming speakers. As a quiet listen, it is much more underwhelming, even somewhat boring.

This leads into the album’s biggest problem: after awhile, it just gets boring. Individually, most of the songs are on a high quality, but they barely deviate at all in pace, tone, or delivery. Even their deliveries stay the same through every song. Topically, they touch on a variety of topics â€“ from weed to the vicious cycle of the street â€“ but sonically, this album is extremely repetitious. A random sampling of five or so songs will tell you everything you need to know about how the album sounds.

“Emergency Powers” is really a collection of good songs for your computer playlists. It’s united in sound, but so much that it is something of a failure as a straight through listen. The sum of parts is greater than the whole. However, as a dark, booming alternative hip hop endeavor, it is a complete success. Even the worst songs on “Emergency Powers” are good ones, and it’s definitely worth a listen from underground hip hop fans.