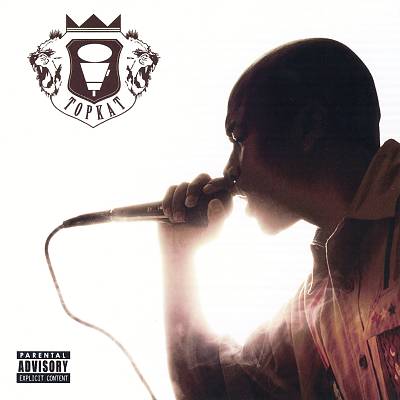 Topkat :: Somethin’ in the Music

As a claim to many individuals, Vallejo, CA is unfamiliar territory, but when you begin to name many popular artists who hail from this Bay Area mecca including Mac Dre, Mac Mall, Celly Cell, and the villainous E-40, you come to realize its magnitude. Another impressive Bay Area artist who also maintains deep roots in Vallejo is Filipino/African-American independent artist Topkat and producer 6Fingers, who both continue this legacy of celebrated rap music.

With influences from acclaimed artists such as Public Enemy, N.W.A, Run-D.M.C., and Big Daddy Kane, Topkat has developed and matured through the years while his rising creativity in his music and lyricism flourishes. While beginning much of his musical endeavors with the Bay Area hip hop group Groundbasics, Topkat eventually began his solo career with hopes of making a name for himself. Coming up in the ranks of Bay Area talents, Topkat has not only received praise from local listeners who voted for him as the winner on 106.1 KMEL’s “Battle of the Bay” contest, but has also had the opportunity to collaborate and perform with artists including Zion-I, Turf Talk, and Opio of the Hieroglyphics. In addition, for all you basketball fans, Topkat has also been included as a hidden player with an exclusive song in 2KSports’ NBA 2K7. The possibilities to come are endless.

With a deep-rooted, inherent fervor for music, Topkat’s story ensues through the revelation of personal triumph exposed by inventive lyricism and beats from 6Fingers in his latest project. Ultimately, Topkat engages us in his new album “Somethin’ in the Music” on Koch Records with the much anticipated drop to follow on May 22, 2007.

Reminiscent of the familiar Bay Area resonance, “Here to Stay,” featuring T.L., was the first single to be released from “Somethin’ in the Music.” With influences from DJ Premier, RZA, Dr. Dre, and, J-Dilla, 6Fingers’ production offers an upbeat flavor that introduces a multiplicity of sounds as Topkat shows the dedication and loyalty to the place that he calls home. As the driving force that has shaped him as an artist as he says:

In its video that soon followed, the city of Vallejo, CA is depicted as genuine and real, while emphasizing common, everyday people living in a less than glorified life. With images of different types of people, young and old, and memorable landmarks from the local taco stop to the neighborhood liquor store, “Here to Stay” stays true to urban life in the making. Never ceasing to forget his roots and always representing the Bay Area, Topkat doesn’t forget to sport his “Bay” t-shirt and Philippines flag in the background.

With the sudden sounds of a storm and slow introduction of the beat distinguished by heavy organs blaring in synchronicity, the album’s title track “Somethin’ in the Music” shows the passion and dedication towards hip hop music within Topkat regardless of the struggle to obtain the dream. He shows that “there’s somethin’ in the music that got you feeling like the game won’t stop, that got you feeling that the game can’t stop.” In a track with a similar message, “Nothin’ Comes Easy” begins with a church choir singing a positive message of keeping “your eyes on the prize” and shows that through struggle a great deal can be obtained as “you’ve got to fall in order to rise.” Also, “Let Me Tell You Somethin'” features a Lyn Collins sample from “Think(About It)” and grasps the ongoing theme of conquering defeat.

Throughout “Somethin’ in the Music,” the common theme is clearly apparent that music is a significant factor in Topkat’s life, but just as much as his friends and family. Clearly it is evident that family has strengthened his soul and has been the motivating force for his aspirations. Through Topkat’s unmasked genuine and heartfelt lyricism, “Maybeline” describes the woman in his life, while “The Best Thing” illustrates the love for his children as he proclaims that it is the “the best thing that ever happened to me.”

On a lighter note, “Somethin’ in the Music” is permeated with lyricism and battle type rhymes aimed towards his competition. With a female’s voice echoing after Topkat’s voice in “Hey,” he calls out to his opposition as he says:

“…All cause I’m raw like that
Eight ball in the corner pocket
All like that
On the back of my rookie card
Peep my stats
I had to work for mine
Never fell in my lap
In Vallejo, CA where I started from scratch
That’s the reason why I spit flows that none can match
So if you suckas ever plan to attack
After every verse I spit there’s a new batch”

With the slow, heavy bass masked with eerie strings in “Got Lyrics” and keys “Boiling Point,” both settle the score in similar manner to all those “sucka emcees.”

The unification of elevated lyricism from Topkat and indisputable Bay Area sounds of 6Fingers results in an exemplary album from Vallejo’s finest. “Somethin’ in the Music” represents the willingness to strive, the triumph, and most of all, is a constant reminder of the love for hip hop music that lies within every emcee.