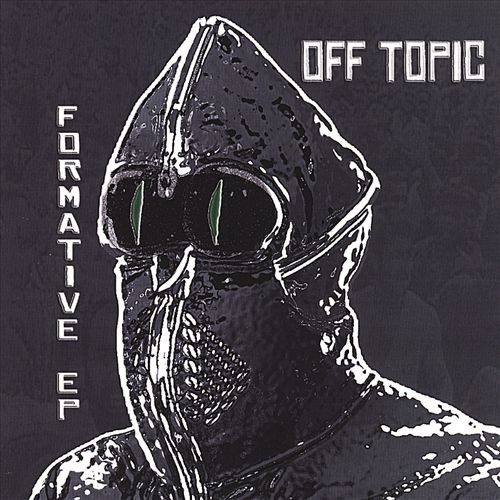 First introduced to the hip-hop underground via his 2004 debut “I Think I Exist,” Off Topic has developed a solid following of fans yearning for that off-kilter, message-laden music devoid of major label restrictions. Indeed, this artist is the illustration of independent â€“ with fellow Code Poets member Phase Fate, their record label, Code Poets Records, consists of their raps over their beats released by them. No middle man; no big boss. With that in mind and no creativity block, the group seeks to use their music as something more, whether a platform for political real-talk or a conduit for inventive rhythms. In either regard, Off Topic proves capable of handling his own on his sophomore solo release, “Formative EP,” a further sampling of his range and potential as a solo artist.

However, do his fans still want a sign of what’s to come later, or recognizable skill now? The answer is not so clear. In fact, this EP is a collection of OT’s first songs ever made; thus, the listener gets the production of old with fresh rhymes. And what makes this problematic is that the criticism of his past work concentrated mostly on the production. Hence, one can only hope that his earlier work was less erratic and dark, and more listenable while still being creative.

From the outset, though, the EP wastes no time in getting started on a more sinister-sounding tip, where the synthesizer, keys and additional sound effects provide a dark soundscape for Off Topic to let out on a multitude of random thoughts stretching from the evolution of MCs to his contempt for the White House on the intro, “Headphones.” Retaining the same morose climate of music, the beat switches to a more complex mix of cymbal clashes, a seemingly mistimed drum line, and swooping synth strikes on “No Seatbelt,” all creating a sonic equivalent to Off Topic’s quick release of battle raps pointing to his role as a savior of lost minds while eluding the government:

“Grammatical, mathematical, tight precision
If my calculations prove correct, I’m in prison
And the faster they try to run from me
I keep with them
Nobody’s out of my reach
I will get them
And I’m more powerful dead
Immortal symbolism
They’re not equipped to handle my shit
They’re off rhythm
And the bad vibes resonate deep into the system’
When they finally catch on nobody’s even going to miss them”

“The Straw” steps back to a smoother beat, at least by Off Topic’s standards, hit with a ripped keyboard loop sending OT on a barrage of both whimsical similes (“I got lyrics like Shakespeare and Morrisette had crazy sex/ And she popped some freestylin’ triplets” â€“ I’m still trying to figure out this one) and direct criticisms of mainstream rappers (“Cause I see the clowns you nod your head to/ Ride around while you gobble down the products that they tell to you”). This melody continues on “Autoautopsy,” a much lower-keyed beat featuring a semi-biographical rap (for the first few lines) mixed with the typical braggadocio and self-adulation â€“ I mean, it is a bold statement for Off Topic to claim that he represents most of Americans. The title track “Formative” returns to that unconventional style of beat (mistimed drum and synth combination) featuring eerie piano lines and ghostly voices in the backdrop of the chorus, while the artist fires off quick battle lines to the changing rhythm. The EP then finishes off with “Return to Ruins,” an overall inventive instrumental marred at times, though, by extensive layering that takes away from the solid core drum and synth lines which all mesh well with the omnipresent static bass.

This last song largely testifies to Off Topic’s general skills as both an MC and producer: there are flashes of great talent, creativity and rhymes; however, these are offset by equal flashes of redundancy, over-production and monotonous flows. In this regard, while the “Formative EP” can be a refreshing alternative, as a whole, it can also be strange and, perhaps, annoying to those fans looking for growth and variety. It seems that they will have to wait for the full-length album to answer such hopes, but in the meantime, can use this EP, again, effectively as a prelude to hopefully something better.