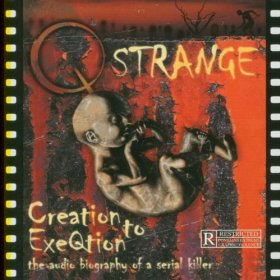 (The following review has been rated R through preview audiences, and contains images of extreme violence…)

Ok that opening line either repelled you or sucked you straight in. If you took the bait, then you’ll agree that this moment in time is perhaps THE perfect opportunity to review “Creation to ExeQtion” â€“ it is a straight-up HORROR flick, in the form of a hip hop LP. Never before has on-screen violence and gore been more prevalent in our lives… Films such as â€˜Hostel’ and the â€˜Saw’ series; video games so violent they’ve been banned; hell, even bloody images of war flooding our news channels daily. We live in a world bombarded with real-life and fictional messages of violence â€“ and although many loathe it, a similar amount lap it up and come back for more. Step forward Q Strange, the stage is yours!

This is “Creation to ExeQtion”, the debut of Q Strange, a Las Vegas-based rapper who seems intent on taking the listener on a journey through â€˜horrorcore’. According to interviews, he has a somewhat tragic back story â€“ to be honest, I didn’t know this until after listening to the album, so it swayed me not. As it is, writing a few lines trying to summarise someone’s personal tragedies for the sake of a review can seem a touch too casual, and I would only do a disservice; thus, my personal preference is to concentrate on the music as much as possible. And I’m glad I did â€“ upon receiving this album (subtitled “the audio biography of a serial killer” â€“ if you can’t guess where we’re going from here…) I was filled with a tiny amount of dread, as a bead of sweat trickled down my neck. I wasn’t sure if I wanted any more blood and guts in my life. Still, the CD artwork had me intrigued, and I soon suspected we could be onto a good thing.

(The stupid reviewer hears a noise upstairs in a dark, deserted house, and decides to investigate…)

It may be pertinent to explain that this album was distributed by Long Range in 2004 â€“ but, having done a little research, was apparently originally recorded in 2000. It is a 12-track concept album, from start to finish chronicling a serial killer â€“ from his birth, killing spree, subsequent capture and execution. Since this is, in essence, a horror flick, it wouldn’t be right to give away every single angle of the story â€“ reading it would effectively be a spoiler. Although we get from the title much of what is going to happen, there are many smart ideas that deserve to be listened to, not read. But as the chilling opening chords open the album with “Origin of Creation”, your spine starts to tingle. Unfortunately, it is not the most stellar lyrical or vocal performance â€“ fear not (or fear a lot), things improve.

(The reviewer knows he shouldn’t do it â€“ yet, inexplicably, the dumb fuck decides to go upstairs…)

The second track, “Drifter”, sees Q Strange get his Slick Rick storytelling vibe on â€“ and it stays there for much of the album. He wastes little time getting the death and destruction started, and it continues to pour forth on “Bad Day”, where he walks a tightrope between spitting triplets and a slo-mo flow. Speaking of which, it appears Q’s flow isn’t exceptional, and the tightness of his lyrics somewhat lacking too â€“ but, like the next track, this is somewhat of an “Illusion”. It is the CHARACTER that repeats phrases and has a slightly off-beat flow. We will come back to this point later in the review. The choruses so far are solid, and “Illusion” has a strong one â€“ this is a theme that will prevail throughout the whole album â€“ with the catchy “Hi! I’m just a regular guy, That’s the illusion I make from the outside” getting in your head like the sharp end of an axe.

(The audience know that the foolish reviewer shouldn’t joke about axes â€“ unlike him, they are privy to what lies ahead…)

Things take a turn â€“ somewhat like my stomach â€“ for the worse with a rather sickening core to the album. Tracks such as “Torcha Chamba” and “Decayed Thoughts” leave little to the imagination, and if I’d had lunch that day, I may well have seen it again at that point. What hasn’t been mentioned yet are the beats â€“ the musical score is strong, and suits the concept of the album very well. An excellent beat blesses “I’m Crazy”, and even the outro to the song is impressive. Unfortunately the liner notes don’t say who produced what beat â€“ but the music is very solid from start to finish, whoever did it. The lyrics continue to improve as the album slashes on, and it almost as is the serial killer’s flow improves as he gains a sick kind of confidence. By the end of the twelve track journey, as he is “Awaiting Exeqtion”, Q Strange has become a monster â€“ and a believable one at that.

(The intrepid reviewer reaches the top of the staircase â€“ and sees nothing. He breathes a sign of relief. He soon finds out that it’s not over yet…)

Not one but FOUR bonus tracks follow the twelve-track horror fest â€“ and rarely, in all my years of listening to music, has there been a more excellently utilised set of extra songs. Each one has a purpose, but the first two deserve particular mention: “Sick Shit” proves, once and for all, that Q Strange is actually a tight lyricist (particularly for a debut artist); “Unmasked” finds him explaining himself, stating that the serial killer is merely a CHARACTER he inhabits (he states that he is “Just a fucking regular guy… [who] drives around with his wife and kid in a sedan”). The other two bonus tracks consist of “Eternal Bliss” telling the story of a youth having lost all hope, thus contemplating suicide; and “Heroin” â€“ a track that pre-dates 50 Cent’s “Baltimore Love Thing” by 5 clear years, and is in a similar vein (pun not intended).

(The reviewer, having turned around to go back downstairs, doesn’t realise that there is a very sharp blade aimed at the back of his head…)

There is much to admire about this album â€“ the concept is strong, and well-executed (pun intended). The MC himself displays many talents in his own unique way â€“ and even if he takes certain graphic images too far, he at least justifies himself eloquently through clever usage of the album’s bonus tracks, explaining that this is entertainment (“No one gives a shit about what I do in everyday life, So I admit it, I’m like Stephen King with mad skills on the mic”). By no means is this a flawless debut â€“ but he takes a real risk going for a concept album, and manages to pull it off. More intriguingly, if this album really was recorded 7 years ago, I’m pretty sure Q Strange would be even better now. Even if it is an inadvisable horror movie clichÃ©, I still want to know what happens next.