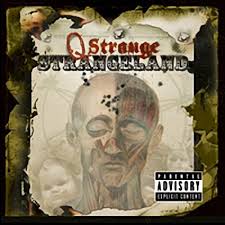 The “Stephen King of Hip Hop?” Q Strange has lived up to his twisted moniker through his inventive horrorcore rap, a subgenre of hardcore rap that became popular by the Gravediggaz and Flatlinerz with music focusing on violence and death. The emotion it attempts to convey along with the not-so-subtle insinuations of mortality is a bit risquÃ©, but Q Strange embarks upon it, nonetheless, even when it involves sensitive topics such as school shootings or killing a prostitute seen in his re-release of “Strangeland.”

While growing up in Providence, Rhode Island, Q Strange lived a particularly difficult life with complicated family situations surrounding him. Alienating himself from his classmates while struggling in school, he was seen as an outcast all the way through high school and became known as “Q Strange.” Finding himself more engulfed in writing verses than doing schoolwork, he eventually found solace through hip hop music. With the opportunity to join the collective “3rd Floor Productions” composed of various DJâ€™s, emcees, and producers, Q Strange was shown the ropes in hip hop music. Although the collective separated in 1997 and Q Strange took a break from the music scene, he came back in full effect while reinventing his character into a more sinister disposition. After releasing the bootleg “Decayed Thoughts” in 1999, his music became acknowledged in the scene as he released his debut album “Creation to ExeQtion” in 2001, a concept album of an audio horror “movie” depicting a tale of a disturbed serial killer. Independently releasing “Strangeland” back in 2003, Q Strange wanted to introduce a different twist on his old music by still incorporating the “horror” effect, but also including tracks on a more emotional level. With his fan base increasing, he hooked up with Mad Insanity Records in 2004 and joined the ranks of horrorcore artists such as Ganxsta NIP, Mastamind (NATAS), Flatlinerz, and Mars. Under the Mad Insanity label, Q Strangeâ€™s “Strangeland” is re-released to give those who missed the craze another chance to experience horrorcore in its entirety.

It takes a certain somebody with a twisted and slightly perverse mind to write rhymes about killing, violence, necrophilia, and just plain horror. Q Strange has done it with his 2004 release of “Strangeland.” With the ominous echoing voices and sinister laughs throughout “Sinphony of Sick,” Q Strange raps in detail about the obsession to kill, so overpowering it seems to spread like a disease. A bit graphic, Q Strange insists that hatred and depression takes over his being while having the urge to exterminate life in any way possible. The more grotesque his lyricism is, the better he feels as he says, “My lyrics are a cry for help, canâ€™t you hear this?” Being ridiculed in school and seen as the outsider, Q Strange professes his emotions as if he were still in school in “Nothing.” Planning to reenact a Columbine style shooting, Q Strangeâ€™s character arranges the moment of attack upon his classmates and teachers. Ultimately in a bizarre twist, his intentions do not follow through as he is unable to complete the task as he confesses:

With its claps and club hitting beat in “Stone Kold Killa,” it sounds like it belongs at a club as opposed to being on a horrorcore album. Q Strange wanted a club track to appeal to the masses, but instead of the booty shaking scene we all envision, his version involves himself as a sniper with a rifle in hand to shoot up everyone he sees. You think thatâ€™s bad? Wait until you hear “Still Driftin.â€™” Donâ€™t let the dope beat fool you. Q Strange takes his lyricism to another level in this track solely dedicated to murders. In a gruesome and chilling manner, Q Strange visualizes an average day of killings consisting of decaying remains in the trunk of a stolen Lincoln, carjacking an elderly couple, beating a homeless man to death, and sticking a prostituteâ€™s own high heel shoe into her neck. To top it off, this is how the night ends:

“Real late at night I still ain’t done killin’
Seeing a man deliverin’ some kung pao chicken
He’s comin’ my way on his bike
I stuck out my arm, I clothes lined him, be careful at night
He’s on the ground covered in chow mein and duck sauce
Cut his face the fuck off, killed him and he got tossed
Into an alley where I cut him and I gut him
Took the splattered remains and then I fuckin’ stuck’em
Into the little take out carton
I mixed it wit some noodles and the shit stinks its rotten
Looked at the paper I went to the address
Knocked on the door, “Jade Dragon Express”
Open the door it was this dude, he gave me the loot
I watched through his window as he ate his food, ewwwww
He kind of looked at it weird
Then he had some pieces of lung stuck to his beard”

With the intention of making an album that does not focus solely on horrorcore, Q Strange introduces more personal, emotional tracks in “Strangeland” in an attempt to show a different side to his musical talents. With an ill-fated piano introduction, Q Strangeâ€™s “Happy Home” shows the sadness and anger from a girlfriend who cheats on him. Unfortunately, you know what happens to her in the end.

With delicate strings in the beginning of “Father Figure,” Q Strange reminisces about the significant male models in his life such as his Uncle Roc and paternal grandfather who both took the place of the father he never had. Also, in “Why Iâ€™ Fâ€™d Up” Q Strange recollects about his rough life growing up without a father and having a mother that was a heroin addict who eventually overdosed when he was the age of 16. Regardless of how difficult his life has become, Q Strange vows to continue his success with a new wife and son, while maintaining the courage to “channel all this negative into positive shit.”

Although horrorcore is a genre of music that is not for the faint of heart with its foreboding suggestions and depictions, “Strangeland” not only incorporates the rawness from the horror, but also establishes a level of sanity through the more genuine tracks. The lyricism from Q Strange is as crude as they come, but he has to be praised for delving into realms most artists do not even dare explore. For all he has gone through, Q Strange still excels in both his cadence and delivery, while sometimes sounding slightly reminiscent of Sage Francis. His lyricism matched with his own production to complement the ill-omened tracks shows the potential of his artistry, regardless of the grotesque nature. Iâ€™ve listened to many horrorcore albums and I have to say that Iâ€™m still getting used to the genre and its level of vulgarity, but I have realized that it just takes the right emcee and production to finally appreciate it.