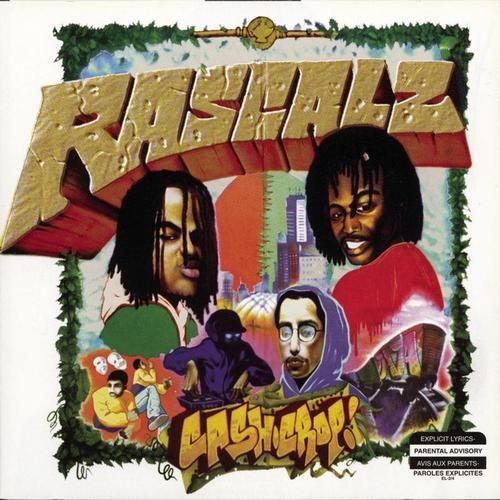 In 1992, a relatively unknown MC pairing of strange, break-dancing, martial arts practitioners burst out on the Canadian hip-hop scene with authority. The single was “Really Livin'” and it presented a new, alternative sound that was definitely not mainstream US, but not altogether Canadian; to be sure, it was unique, embodying the four corners of hip-hop to the fullest and targeting a specific group of hip-hop head-nodders without paying mind to commercial appeal. Some years later in 1997, the group that was then known as the Ragga Muffin Rascalz (paying ode to their reggae influences) perfected this sound on what has become an all-time Canadian favorite in “Cash Crop,” the sophomore release of the Rascalz, a West-Coast (Vancouver to be exact) collective of MCs Misfit and Red-1, and producer/deejay DJ Kemo.

Perhaps known for their most successful single “Northern Touch” (in fact, due to its unwavering success, it was added to later releases of “Cash Crop” in 1998 and thereafter) the Rascalz became that unrelenting band of hip-hop purists that carved their own niche in both Canadian music and hip-hop as a whole. While less skillful on the mic than more proven rappers, their delivery and style would help the Rascalz stand out, and is aptly demonstrated on “Cash Crop,” the subject of this current review and a fundamental listen for those interested in tracking the development of post-Maestro (Fresh Wes) Canadian hip-hop music.

The album begins on a reggae-tinged note before quickly and calmly transitioning to “Temptation.” This intro track typifies the Rascalz sound that relies heavily on a few but effective layers: a simple and static-laden drum beat, jazzy yet off-kilter horns and an additional beat line (synthesizer or other) â€“ something akin to what you would hear from Freestyle Fellowship, but with more structure. While it seems like a basic equation, the combinations in which Kemo creates and arranges them suffice for several production gems. In considering this, “Temptation” works well as the album’s starter: a smoothed out track that gets you well-acquainted with the group and their psyche. Clocking in shortly after is the “Dreaded First” of the North-West, a battle-rap banger that meshes greatly with the pounding beat, evoking aural visuals of old Kung Fu flicks (but unlike those stimulated in Wu-Tang albums). As quick as a tiger knee, the group then calls on their “Soul Obligation” and taps into that B-Boy mentality in, perhaps, one of the rawest hip-hop breaks produced on Canadian soil (or other, for that matter). The traveling horns compliment the choppy beeps that pop in throughout the track, allowing the MCs to chime in effortlessly:

Although the lyrics are lacking, the combination of voice, rhyme and beat create a sick feeling of raw hip-hop coming at you, not easily subdued by the fading scratches closing out the track. Although hard to top, the crew tries its best with a more contrasting beat in “Fitnredi,” a confluence of sounds that hits you hard and rarely let up throughout the track. Here, Kemo ventures into something different, but succeeds magnanimously in bringing together various synth lines into a perfect soundscape on which Misfit and Red-1 drop typical rap braggadocio: “You gots to be fitnredi, we ain’t gentle folk.” Nonetheless, they return to their trademark sound on “Mood Swings,” where the duo opines on the purpose of mood in music over a cool drum break that leads into that mix of horns and bass again. While “Blind Wid the Science” alters the same combo of production layers, albeit effectively, it is on “Solitaire” that the Rascalz nicely close out the album incorporating a more sympathetic and hypnotic feel to the track that fits the group well and leaves the listener in a state of both reflection and head-nodding with lines like those in the hook:

“Thoughts I suffer in my own world
As it rotates, I illustrate to the whole world
What I got within, when I’m all alone
I try to maintain, so I can hold my own”

By no means is the album perfect. In fact, it is almost a sound that is either loved or hated, which can create several problems in developing a fan base. Listened to individually, the songs mentioned above are easily enjoyable, different and worth various repeats; however, the majority of songs not discussed suffer from monotony and redundancy when heard alone, poking holes in the solid sound crafted in the album’s standout selections. For example, “No Idea” lacks innovation and evokes more yawns than yearnings to hear it again. As well, “Clockwork,” the album’s only real posse cut (featuring Checkmate and Flipout, both also from Vancouver) does not match up in intensity as it could, and “Anatomy” becomes more annoying than anything else. These weak links end up revealing, moreso, the lack of content and melodic diversity that could have added more quality to this album. Furthermore, we see Misfit and Red-1 as more one-dimensional MCs when not backed by sturdier and more engaging production.

Still, when listened to as a whole, those filler songs find a role and help to create a cohesive sound that plays to the Rascalz strengths, despite reflecting their weaknesses â€“ ultimately, it’s a win-lose option that, in my opinion, ends up working in their favour. When released, this album was something original and fresh, and definitely pleasing to those who copped it. Balancing some strange brews of hip-hop music with their sci-fi-esque raps and moods, sung hooks with classic scratching, and breaking with martial arts, the Rascalz produced something unique in “Cash Crop” and staked a claim to an unusual but effective style of hip-hop that is altogether their own.