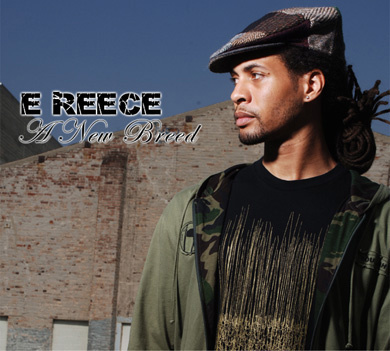 With all the controversy about the direction of the rap game and its gangsta content, there’s one thing both sides of the argument seem to agree upon. In 2001 Scarface dedicated a whole album to the concept of being “Last of a Dying Breed” and 5 years later Young Jeezy called upon Face to feature on a song of the same title. While every gangsta rapper is claiming to be the last of their breed, all the conscious rappers are claiming they’re here to bring something new and different to the rap game. So both sides seem to agree that the gangstas should theoretically be dying down and hip-hop should be in an era of innovation and freshness. E Reece subscribes to the theory with “New Breed” which no doubt implies that his flavor of organic hip-hop is something unseen in the rap game before. Quick to criticize others for perceived shortcomings, so-called conscious rappers often succumb to the same pitfalls of repetitiveness and lack of originality. E Reece is no different, as despite claiming to be a new breed serves up a disc full of music we’ve heard before in some form.

“A New Breed” kicks in with a typical underground laid back bass line and a kick-dominated beat. E Reece drops a few bars about changing the game, while staying true to the roots of hip-hop, while uplifting the world, all while not really saying much to explain why his boasts will lead to such results. “Everything” features a beat with a sped up soul sample that could be done justice by a more capable emcee. E Reece uses the occasion to describe how he got into hip-hop and then name drop every rapper he’s listened to over the years. Once again, this is nothing new as we’ve heard every rapper tell a similar story sometime during their career. The only odd thing is that for a West Coast based artist, E Reece overlooks a ton of West Coast pioneers. “The Get Up” throws us a curve with a rock inspired cut meant to be a party joint. The thrashing guitars provide plenty of energy while E Reece shows us how he gets down:

“Soulfully energetic, rhyme style kinetic
Spit fire to the masses, bring heat without the plastic
Times is getting drastic in these new days and ages
Different ways, different phases, my poetry amazes
Set trails to blaze shit, Frankie B and Maze shit
Hit hard regardless, still a starving artist
But I’m still eating good, doing things they wish they could
Living dreams, producing schemes, the illest cat upon the scene
Everything ain’t what it seems, flooded by the bling bling
But the truth will reign supreme in every and all things
Gotta touch it proper, hit each and every shot
Tell your brother tell your sister
Tell your momma tell your poppa
Cause we going worldwide without losing a stride
We gots to do it right, consciously without a fight
Making moves, don’t fake the groove, doing what we gotta do
Where we do it for you, so we gotta keep it true”

Despite a dope beat and decent hook, I really doubt E Reece’s words would do much to move the crowd as they really don’t fit with a party joint. Worse is how he seems to differentiate between music bragging about bling bling and music bragging about rap skills. In the end both are still about bragging and not much else.

Things don’t get much better as the album proceeds as E Reece wastes dope beat after dope beat with generic rap. “Survivors” is chock full of uninspired battle rhymes. “Good Musik” is another song about how great E Reece is and how much he loves music. “B U” is a jazzy number dedicated to the boys and girls and urging them to be themselves, original, and something new. This track actually has somewhat of a message that is cohesively conveyed by E Reece but such a track has been done better by the likes of Nas, among others. The rest of the album has a few standout tracks, mainly the personal “Happy Dayz” but overall lingers at average battle raps.

The problem with E Reece is one which plagues many an emcee in the rap game. These rappers are so focused on being different and condemning the status quo that they don’t realize they’re just as guilty as the rappers they are criticizing. For one, it’s hard to fathom what about track after track focused on your rap skills is positive or going to change the world. Outside of that, like many other positive rappers E Reece lacks the skills and charisma of his more hedonistic counterparts. For all the criticisms “New Breed” isn’t a bad album, just a highly generic one on the lyrical tip. The beats are actually pretty good all around, though a bit boring at times. E Reece won’t hurt your ears, but lyrically and stylistically he won’t leave a lasting impression. His message is one you’ve probably heard before, and if not then you probably don’t care to hear it at all. You could do much worse than E Reece, but the spectrum extends the other way equally as far.