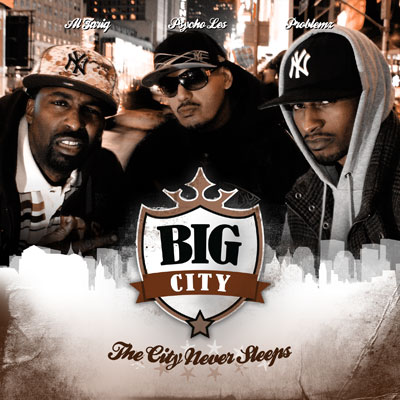 It’s not your imagination – The Beatnuts disappeared completely off the radar. The group was already long-since splintered by 2004’s “Milk Me” as former member Kool Fashion had struck out on his own as Al Tariq way back in 1996. Unfortunately it became increasingly hard for the remaining duo of Ju-Ju and Psycho Les to carry the lyrical weight ANDproduce their famously rowdy and funky beats – particularly the latter. Even though “Milk Me” garnered some positive response it was hardly a sad day to see The Beatnuts fade away, since their in-your-face attitude and antics had been upstaged by more lyrical MC’s who were just as rambunctious if not more so. Behind the scenes was clearly where these genius producers were best served – getting paid off making the hits for OTHER artists. They had a good run while it lasted but now it was “Good night Gracie.”

Apparently in 2007 that’s no longer the case. Fresh off lyrical retirement Les and Ju-Ju had allegedly reunited under the brand new moniker Big City. Better yet the hype for this album indicated they would reunite with Al Tariq and include long time Beatnuts familia member Problemz on the album too. POSSE ALL IN! Now how could you possibly beat a stellar line-up like that? Putting the former Kool Fashion back in the mix immediately makes the group a LOT stronger lyrically and even though Problemz has been kicking rocks in the underground for a long time he might just be the man to revive The Beatnuts and take them to a whole new level. The most important thing would ultimately be the beats, which is what the aptly named Beatnuts have always lived and died on. After what seemed to be a three year layoff can their production chops still hang in 2007?

Well first things first some of the rumors and misconceptions about Big City need to be cleared up. #1: Ju-Ju is NOT involved in this project, so fuck what’cha heard. #2: Al Tariq in 2007 = Kool Fashion in 1993. While that may be a rather obvious given his absence from The Beatnuts for over a decade, it’s still apparent on “The City Never Sleeps” that we won’t be getting any raps near as hilariously crass as “Lick the Pussy” – that job will require the services of Akinyele or R.A. the Rugged Man. #3: Big City = The Beatnuts. There’s something inherently off right at the start on “Boy.” There’s no trademark hispanic sound, funky horns, or witty absurdity whatsoever. The banal hook of a chick stating “boy – you done done it now” over and over again may be more apt than this triumvirate intended. They done indeed done it here, and what they done did done did no good.

Psycho Les: “Oh boy your man pulled a Roy
He gets knocked down now you the lone cowboy
A Lone Ranger, they out to hang ya
You ain’t Will Robinson but you in DANGER DANGER
DANGER BOY, and on top of that boy
That powder in that pot it ain’t rockin back boy
Knockin back boy, comin back boy
Be like fuck it I’ma pop ’em but they gunnin back boy
And Lord boy, this can’t be joy
Them coppers with them glocks right in front yo’ spot boy
And boy, you used to rock the block boy
Clique made +Cash Money+ now y’all real +Hot Boys+”

This rap is depressing on every level. Psycho Les was already prone to simplistic rapping but on this barely functional beat hearing him say the word “boy” hundreds of times is entirely intolerable. Even worse things have now degenerated to the point where instead of sounding like the seasoned rap veteran he is, he’s resorted to writing raps about cooking up coke to crack and selling it on the block. I expect that from new rappers breaking in, hoping to one up each other with their “snowman” reputations, or from long-time gangsters who have made abundantly clear their raps are a cinematic thrillride not to be confused with real life. Last but not least the Hot Boys broke up six years ago, so using them in a Cash Money punchline is neither witty nor up-to-date. Unfortunately such mediocrity is typical of “The City Never Sleeps” as opposed to the exception. “MILF (Miss Juice Goose)” is as ridiculous as the title sounds and the incessant melody is a snake charmer fed through a synthesizer as to steak through a meat grinder – chunks only vaguely recognizable as the original. The song titles really do speak for themselves – “Chedda” and “Running Around” are exactly what you’d expect as are “I Hear Ya” and “Jump On It.” Jump on what – boredom?

It’s amazing the degree to which Psycho Les dominates this album on a supposedly collaborative effort, although Al Tariq’s verses are brief bolts of lightning which illuminate the dark and then quickly vanish. Problemz doesn’t deliver the added punch one would hope for and seems to be dragged down a notch just by rapping with Les. There are few enjoyable tracks though – the fat funky flavors of “Stickemup” featuring Greg Nice harken to better Beatnuts days, and Al Tariq is clearly feeling the beat with his raps like “put it on the wax and watch the vinyl get scratched up/have ’em +Dancing on the Ceiling+ like Lionel’s last cut/like Ned the Wino out here hustlin fast bucks/hit harder than brass knux, the city is mad nuts.” And just so this review doesn’t seem hypocritical, there’s a point at which dated references become cool again, and invoking a 20 year old pop classic from an R&B legend is mad fly – a reference for nostalgia’s sake instead of sounding like you went to sleep in 2001 and woke up today. While Tariq can turn a phrase and make words fit, Les now more than ever sounds hollow and shit. The chief problem with “The City Never Sleeps” is that a lot of it WILL put you to sleep. It didn’t have to be that way but poor follow-through and bad execution = mediocre product.