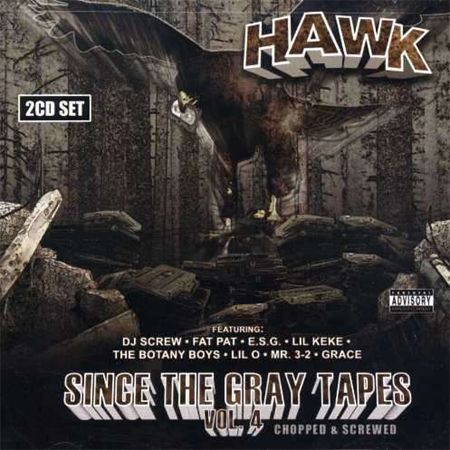 I should like to note before I start this review that if you purchase this CD do NOT go to the website on the back cover. Despite the domain name it is not the home of Screwed Up Click Entertainment, it’s just another crappy portal site where someone either snapped up a domain when it expired or bought it and decided to try and cash in while cybersquatting on it. If anybody from S.U.C.E. has the real link, please e-mail it to me. The irony here is that I Google’d the phrase and the first two hits were our reviews of DJ Screw.

Having been familiar with screwed & chopped released for a while now, H.A.W.K.’s “Since the Gray Tapes Vol. 4” is still perplexing. I feel like Black Thought from The Roots – where did Gray Tapes parts one through three go? At least Google was helpful with this issue as the first two “Gray Tapes” were posthumously released mixtapes from H.A.W.K.’s brother Fat Pat. Ironic I know but we’ll get into that in a minute. Nonetheless this fourth volume is doing it big as a double disc release; except that is for the fact EACH DISC HAS ONLY SIX TRACKS. I thought I was reading that incorrectly until I looked closely at the back cover and it indicated that disc one was 67:33 long and disc two was 69:55. HOLY FUCKING SHIT. Clearly these have to be the longest and slowed-est screw & chop songs of all time! I honestly expected when I ripped these discs that the songs would all be at least ten minutes long.

Well that’s not exactly how it worked out, but that’s not far from accurate either. The very first song on disc one of “Since the Gray Tapes Vol. 4” was TWENTY-THREE MINUTES LONG. The song seems to be a tribute to Fat Pat specifically and to fallen friends and fam in general. I’m not sure of the original source before this one got the chop treatment, as the list of artists featured on it include E.S.G., Lil 3rd, Mafio and the Botany Boys. The whole thing seems like an extended freestyle session, and at just about 4:30 in the audio drops out in a way I can only describe as a SNAGGED TAPE. If you’ve ever made a mixtape (I mean a real fucking CASSETTE mixtape) or used a reel to reel you know what I’m talkin’ ’bout – that frustrating moment when you play it back and realize the tape bunched up in the machine while you were recording it. The audio warbles back to life a few seconds later but this is clearly not a good sign – whoever did the audio transfer performed no quality control of any kind.

The second song “Third Coast Mob” is a more reasonable 6:17 but features two SUC members I am only vaguely familiar with at best – Grace and Wood. Wait – I thought I was buying an H.A.W.K. album. This prompts me to closely examine the back cover of “Since the Gray Tapes Vol. 4” again. Well SHIT – I’m a stupid motherfucker. I don’t see H.A.W.K. actually featured on any of these songs on either disc. I see Cl’Che on “Southside Love,” Fat Pat on “Full Time Playa,” Lil’ O & Mr. 3-2 on “Players Get Chose.” Now before you get mad I realize that H.A.W.K. passed from this Earth on May 1st of last year, but with his name on the cover I assumed at the worst it would be a “best of” type deal or at worst some unreleased tracks. Apparently though I drew the wrong conclusion – if I had Google searched the album name BEFORE purchase instead of AFTER I would have suspected this was a posthumous H.A.W.K. mix like the first two volumes were for Fat Pat; thus I have been schooled.

There are some very enjoyable songs to be found throughout this set, despite the total lack of production quality and arguably highly misleading album cover. DEA’s “Money” is a smooth little ditty and would be at any speed. Even though “Watch Yo Enemies” by the Southside Players is 22 minutes long it almost survives becoming repetitive because of the Whodini “Friends” loop (the same one used by Nas for “If I Ruled The World” among many other people). They also do a nice job on the much more reasonable length track “Too Hot.” On the whole though, and I say this with the utmost respect to the dead (God bless both Fat Pat and H.A.W.K.) this mixtape is no good. These songs would have been excessive even before being given the DJ Screw treatment, and the vocals and production quality are dirtier than the worst early 1990’s Wu-Tang Clan bootleg you ever heard – and that’s not a compliment. SUC rappers are always best on short songs with specific topics, and long freestyles just become absurdly self-referential and overly simplistic – you’ll hear “play” and “every day” rhymed as much as “grindin” and “timin” let alone “real” and “kill.” Even hardcore fans should think twice about this one.