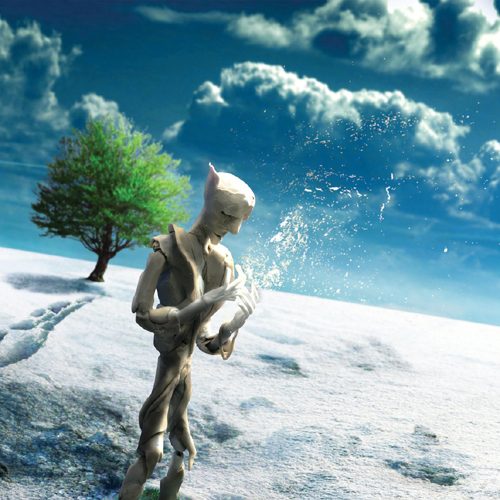 “Ode to Hyde” marks a long-time collaborative effort of two Canadian emcees, Liquid Serebral and Dexter Noizulli, tinkering an experimental mash of sound across a ten track span of an LP. Smartly named, the album is a bi-polar release in regards to the mood it conveys. In a similar respect most music (especially rap) can sometimes be distinctively divided into the good and, well, the discs we use as coasters. What side of the spectrum does “Ode to Hyde” fall on?

Both members of Magnolius have been part of a six man collective known as the Soliva Spit Society–a small staple in the Canadian underground hip-hop movement. It is hard to believe but the release of “Ode to Hyde” is the product of twenty years of friendship and effort as they self-describe their album as “nothing short of an experience”. The album is an experience in that it focuses heavily on the subtle backdrops that are influenced by sounds that are eclectic but less pronounced than most hip-hop. The entrancing productions are concoctions of Mike Denheyer who handles nearly all of the tracks. Upon listening to the beats one is likely to just sit back in a relaxed manner as if they’re the sounds of nature. In stark juxtaposition though, the emcees are most forceful with their delivery and often overtake a nice sonic soundscape provided to them. Both rappers sound similar, but more erratic, than the underground legend Slug of Atmosphere.

“Heroin” might be an off-putting name for an opening track, but the funky groove seems to take over during the course of the first 2 minutes before Liquid and Serebral and Dexter Noizulli take over with their rhymes and the beat whips up into a fast paced frenzy. According to the lyrics ultimately the drug that is referenced seems to be used only as a metaphor for the ‘liquid noise’ that the collective makes.

The album continues to be unpredictable in almost all respects. There are several beat changes and deeply layered tracks from Mike Denheyer like that of the ironically titled “Love Therapist”. After a hypnotic howling chant creeps along dark and brooding lyrics take over the track like, “Lying on the bloody floor expired with the Magnum in his hand/ With no place on the nightstand for his family or his fans.”

If you can get past the sort of annoying voices of both rappers you will find yourself enjoying the poetic nature of their lyrics and delivery. Songs like “Glorious” are story telling joints about everyday life, not the thugged out drug fairytales of rap hustlers:

“When the sun beams creep from the bed skies
I lie on my face with my eyes on the eyes
Of the wool. No bullshit-I stretch my chest
Adjust the focus, slide
Into the kitchen for a bowl of juice
Because I haven’t cleaned the cups
And right now I’m not going to
Today I’m walking at my own pace
And play the song I can sing along to
Do what I want, when I want, how I want to…”

The song continues into a narrative really about doing nothing but it reminds you of those days in which you wake up just feeling happier than normal. The jazzy keys fit the mood of the song perfectly as well.

There are certainly moments on the album that get wildly erratic and really hinder the better half of the disc. “Human Race” sets the pace too fast with the jangling beat. Then, a pounding snare closes out the song with a beat switch but with no better effect. This is a complete contradiction to some of their songs that seem to meander with no real purpose.

Luckily, Magnolius seem to overshadow these missteps with good follow-ups to their lesser tracks. “Utter the Sun” is the saving grace for the aforementioned “Human Race”. Where the duo seem to falter most is in their construction of choruses, but this track is fully fleshed out into a nice composition.

Magnolius is already working on their second album and it is hard to say whether they will continue with this highly artistic, coffee-house, approach to their hip-hop music. “Ode to Hyde” is really an ode to both of the characters in the classic tale because, like the human psyche’ , there are subject matters that are vastly positive and negative that reflect the moods of human beings quite well. Some will find Magnolius a bitter pill to swallow at first, but if you give these Canadian bred emcees a fair chance you will find that there is a lot to like about their eclectic form of hip-hop. Magnolius succeed mostly when they keep their music structured and calm.