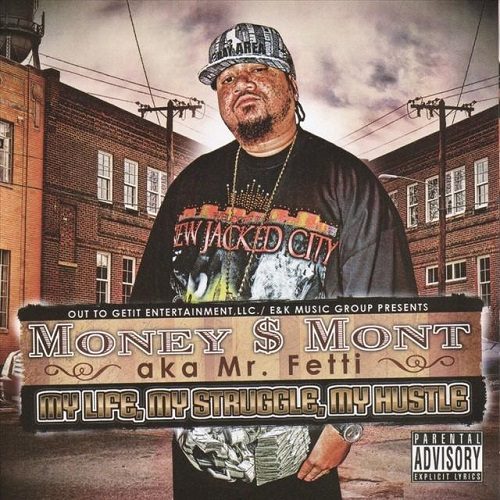 Money Mont :: My Life, My Struggle, My Hustle

The only thing worse than growing up in a poor, crime-ridden neighborhood is growing up in a poor, crime-ridden neighborhood that is in one of the wealthiest areas of the country. Watching the wealthy frolic just down the block while you and your friends and family struggle to survive is its own kind of hell. Money Mont is from East Palo Alto, which had the unenviable distinction of being the murder capital of the U.S. in the early 90s. EPA is a tiny enclave of poverty amidst the excessive wealth of Silicon Valley. 16% of the residents live below the poverty line, the average family income is $45,000, and the average per capita income is $13,000. Compare that to Palo Alto, which is just down the street, home of Stanford University and Hewlett-Packard, and has a family income of $117,000, a per capita income of $56,000, and about 3% of the population living below the poverty line. That ain’t right.

Money Mont, aka Mr. Fetti, has documented the struggles and joys of growing up in the EPA on his debut disc, “My Life, My Struggle, My Hustle”. He got his start on Mac and A.K.s debut EP in 1996, and has been featured on songs by local artists for the past ten years. He is clearly a product of the Yay Area: His flow has the same bizarro quality as E-40’s, and his production draws from both the g-funk of mobb music and high energy of hyphy.

The production is good throughout the disc. Money Mont uses a slew of local producers like Mac P, Sean T, King Cydal, and Tatum1. Most of the beats are constructed around keys, drums machines, and live instruments, all the better to avoid licensing and legal issues. They manage to mix it up with some cutting and scratching, which adds a welcome old school element. One of my favorite tracks was Blak Muke’s “Fresh”, which samples a lot of golden age hip hop. “I Been Hustlin” is another great track, which uses the ubiquitous sped up soul sample and strings to create the right tone for Money Mark’s introspective lyrics about growing up and getting by.

While I am not a huge fan of the whole hustler motif, Money Mont pulls it off here. Sure, he does a lot of bragging about pimping, making money, having jewelry, and getting with the ladies. However, he manages to instill some honesty and vulnerability into his rhymes, so that you buy into it. He also manages to make hustling seem like an act of rebellion, a big “fuck you” to all of the rich people in the Bay Area who couldnâ€™t give a shit about the people who have been left out of the internet and biotech bonanza. This sets Money Mont apart from a lot of the street rappers who seem to be reading from a script, spewing the same tired cliches because they think that’s what hip hop is. He even nails the “sensitive thug” song without coming off as cheesy or hypocritical. On “I’m Blessed” he raps:

“I play the cards I was dealt in the small town cemetery
I was raised in a place where everything wasn’t all gravy
Where in the blink of an eye, you can lose your life
When them shots were fired, I should have lost my life
But by the grace of God, I’m here to testify
Yeah, I got hit, but He didn’t let me die
Laying on my side, looking at the sky
Didn’t say it out loud, but Iâ€™m asking why
Was it the dirt I did now back to get me?
They say life is a cycle, everything 360
Don’t want no pity, just a chance to live”

That verse might come off to some as a blatant attempt to cash in on 50 Cent’s property, but I bought it. He also gives numerous shout-outs to his wife, which is unfortunately pretty rare in hip hop. By presenting a more respectable and sensitive side of himself, Money Mont adds a layer of complexity to his persona that a lot of rappers ignore in their quest to be the hardest, richest, biggest pimp on the block.

I would have enjoyed Money Mont’s lyrics even more if I could have understood everything he was saying. Between his garbled, rapid delivery and heavy use of obscure Bay Area slang, Money Mont is not the easiest rapper to comprehend. The slang is fine, and will no doubt enter the popular lexicon (by way of a Southern rapper) in a few years. What Money Mont needs to work on is breath control and delivery. He deserves to be heard, and he should make sure that listeners can understand what he’s spitting. “My Life, My Struggle, My Hustle” is a good album by a rapper who deserves some attention.