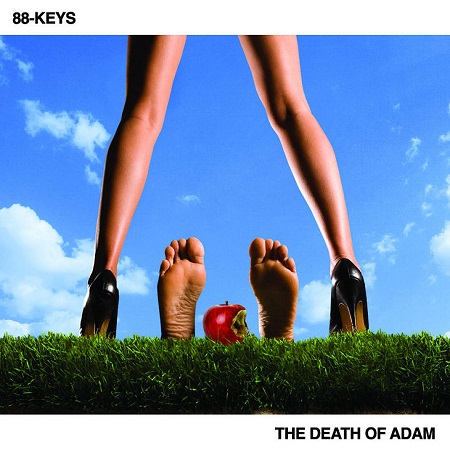 88-Keys has been known for producing tracks for groups such as A Tribe Called Quest and The Pharcyde, but has decided to take a turn in developing his own solo project “The Death of Adam.” Executive produced by Kanye West, as well as featuring him and others throughout the album, 88-Keys attempts a more innovative concept album that not only demonstrates his production and lyrical talents, but tells a story in the end. From start to finish, it’s a tale that slowly unfolds as you find out about the characters involved, the circumstances, and of course, “The Death of Adam.”

“The Death of Adam” takes on an almost television drama/comedy series quality with each track as we learn more and more about who Adam is and his thought processes during the various stages of his life as 88-Keys takes on the role of storyteller. Adam’s adventures begin similar to how I can imagine, most guys’ mornings begin in “Morning Wood.” Yes, the kind of “morning wood” you’re thinking about is exactly what 88-Keys refers to as he shows how Adam likes to “start off on the right foot if she takes care of the morning wood.” With the happy, go lucky beat, it only seems fitting to start it off right.

Upon meeting a potential suitor who he falls head over heels for, it is here that Adam’s relationships begin to ensue, for the worse that is. After making extreme efforts to win her over with extravagant dinners and Broadway plays, it isn’t appreciated as shown in “Nice Guys Finish Last.” To make matters even worse, his lady exposes the truth that she sees him only as a friend as Adam seems overwhelmed and confused as shown in the upbeat, rock influenced track “The Friends Zone” featuring sounds from the indie-rock band Shitake Monkey. Dissatisfied and frustrated by the whole situation, Adam pledges to himself to never meet a similar woman and instead takes on a new role as the player and not the played as 88-Keys’ fuzzed out voice details the story in “Handcuff ‘Em.”

Soon after, Adam finds himself another female as his first sexual encounters with her are accounted in “Stay Up! (Viagra)” as Kanye West makes an appearance with his lyrics on top of 88-Keys’ soulful, jazzy beat full claps and deep bass. Kanye continues his memorable rhymes in the track as he makes reference to characters such as Borat and Kim Kardashian and keeps it humorous with the definitive theme of trying to “stay up” through the night.

As Keys’ utilizes the overused fuzzed out voice once again in “(Awww Man) Round 2?” it reminds us that it is too closely reminiscent of Kanye’s signature persona. Although it remains entertaining as it explains how Adam’s woman is ready for round two in their sexcapades, Keys’ lack of lyrical cadence as he merely speaks throughout the track and clichÃ©d, altered voice makes for a uninteresting track.

J*DaVey’s soulful vocals take over “Dirty Peaches” which re-examines the previous night more so through the female’s perspective as we soon enough learn she has been deceptive. The amusing “Close Call” soon follows and features Phonte of Little Brother who shows how important it is to wear protection as he exposes how Adam was told a fabricated story:

“Until one night she put my hand on her stomach
And said, ‘Baby we gonna be a family once I pop this kid…’
I know it sounds crazy and it seems prideful,
But I couldn’t shit the feeling that I was lied to
She ran out the room with mad tears in her eyes
Left the pills on the dresser right by my copy of ‘Get Back’
I poured them in my hand
And put one in my mouth
Sure enough
All this time she been popping tic tacs”

Keys’ demonstrates his vocals as he swoons throughout the track about making sure to put a “jimmy” on.

To make matters worse, it seems as though Adam ends up with an STD as shown in “The Burning Bush” featuring the humorous antics of Redman. As the track unleashes an almost Latin flair with blaring trumpets, Redman and Keys account Adam’s run in with a mysterious flare up given to him by his female companion. This comical track takes us through the agony Adam deals with as he makes a trip to the doctor and tries to get in contact with the female about the situation. Poor Adam.

Although his female companion avoids his phone calls about the STD, she one day decides to show up a few months later to let Adam know that she wants to have this baby. “Ho’ Is Short For Honey” features Kid Cudi as Keys’ produces a stellar beat full of funk and soul and a definite reminder of classic ’70s music. You can’t help but feel sorry for Adam at this point as Kid Cudi shows how Adam’s life has crumbled and his aspirations have been shot to the ground.

“The Death of Adam” ends with “Another Victim” as Keys’ dedicates the album to Adam because he falls victim to getting his wages garnished because of child support and raising a child he really didn’t want. Ultimately, in an interesting twist, we learn that Adam doesn’t physically die, but this in fact is the metaphorical “death” of Adam because he has nothing left to live for. In Keys’ words, “Adam, you got yourself out the game. You’re dead Adam. Rest in peace.”

In the end, was I offended by the exploitation of woman and the portrayal of scandalous females in “The Death of Adam?” No. The fact of the matter is that this is reality and unfortunately it’s something that happens. As a female, I can vouch and say that yes, it’s true-some women are malevolent like that. I’ve heard of many situations like Adam’s and in most cases, the guys think death is in fact a better option. I don’t blame them. Like Keys says, “The entire album is about the power of the punan, if you will,” so fellas, be safe, if you know what I’m saying.