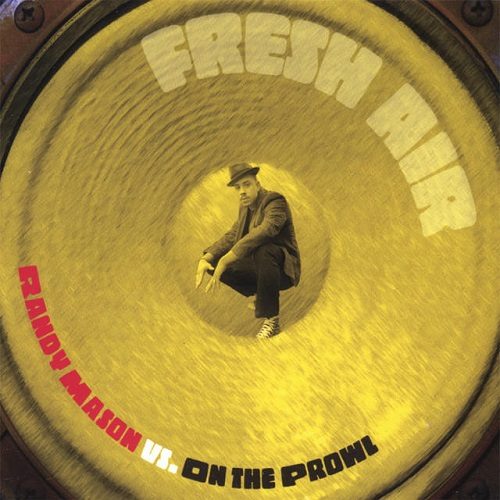 Randy Mason vs. On the Prowl :: Fresh Air

Surely you have heard the phrase, “breath of fresh air”. That is what Randy Mason and the garage/punk band On The Prowl try to bring with this release. Not that the rock/rap mish-mash has never been done before, but it is definitely more original than the typical fair. And Randy Mason proves that he collaborates with the live instrumentals offered by On The Prowl in a much more tolerable way than the Shop Boyz did on “Rockstar Mentality”. “Fresh Air” is a decidedly more subtle album, even though some of the fuzzy guitars occasionally whip up into a frenzy the spotlight really shines on Randy Mason’s lyrics.

Randy Mason is an MC’s emcee, meaning that he seems to do it for the love of the art and thankfully this album suggests that notion. Hailing from the south Bronx, New York, the 22 year old MC has been inspired by the likes of Nas, Mos Def, Talib Kweli, Common and other rappers that mostly focus on the positive side of life. He sounds more like Lupe Fiasco (like he flowed on “The Cool”) but he is just not quite there yet in his breath control and words working on multiple levels in the poetic way Lupe’s do.

“New Music” is the opening track that builds into an epic opus with its blaring guitars. It is the type of song Black Thought would write and compose for The Roots. It declares itself as a new form of music but it is merely well-constructed rap-rock music. The guitar distortions on the track add a dimension to the track in the way Morella from Rage Against The Machine playfully created new sounds his electric guitar. Randy Mason talks about his transcendental material with the following line, “New music/Not even the sky is the limit we dream roof-less/Beyond where the Sun and Moon is/Don’t need a blueprint/We make the footprints you place your boots in”. Though Randy Mason is a self-proclaimed intellectual on a higher level than most, it is hard to disagree with nice lines like this to start off the album.

The problem starts to take form in David Yawman’s garage/punk band On The Prowl and how it fits with the flow of the featured emcee. There is no doubt that the group is chock full of capable musicians in their own craft, but sometimes the rock n’ roll influenced tracks can be distracting. The grinding guitars on “Style” and fast-paced drums are so frenzied that it is likely to cause an aneurism for unsuspecting rap fans, or even the most open-minded underground head. The industrial beat of “Fastlane” is equally as pounding as the aforementioned “Style” track and it becomes clear that the title of the group Randy Mason vs. On The Prowl is an understandable title, because sometimes it seems like they are working against each other to take ownership of tracks.

Randy Mason has too much panache to take backseat to the band and it is when he and Supa DJ King James on the turntables take over to create feel good, jazzy, hip-hop joints that this albums succeeds most. “Fresh Air” and “The Melting Pot” are two of the best tracks on the disc for this reason. The latter comes through with funky guitar licks and Mason states on the chorus:

More funk, soul and jazz, please. Once again, the form of rock n’ roll here is usually good enough, but the funkiness almost Tribe Called Quest quality of this song is why it is a winner.

The hypnotic “Take You There” truly takes the listeners on a journey over a dreamy beat. “The music is out of this world/I swear and I’m going to take you there”, Mr. Mason spits effortlessly. The song constantly urges the listener to take hold of his hand and notice to his words that he is taking you beyond the restraints of the typical rap album. It feels like it should be an introductory track to an album because that new world is not reached, but the notion is toyed with.

Randy Mason Vs. On The Prowl’s “Fresh Air” is without a doubt an interesting album. The two parts to the equation sometimes seem to clash with their own purpose in mind. On The Prowl seems to be a pretty solid rock group capable of a variety of sounds. Randy Mason proves to be a quality emcee that is hotter than 90 percent of the spitters out there–and with the potential to reach greater heights. I do not want to repress originality or creativity in the way that my review may suggest, but maybe I do want to take the Yoko Ono role and hope for a break-up, so both parts of this collaboration can bring their own breath of fresh air.