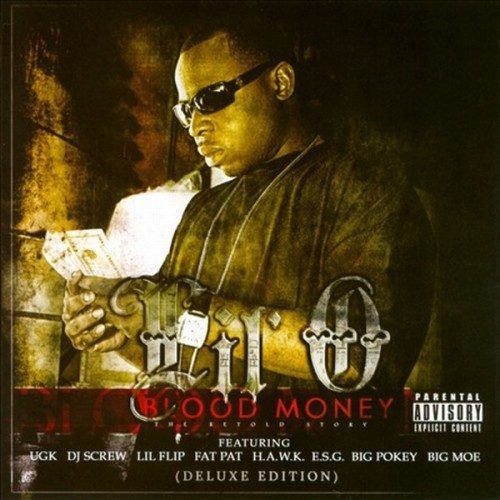 Lil’ O holds the distinction of being one of the first members of the Screwed Up Click to have signed a major deal. Before Lil’ Flip, Big Moe, or Lil’ Keke got a major deal Lil’ O was briefly signed to Atlantic Records who re-released his “Da Fat Rat Wit Da Cheeze” album. The deal seemed logical as Lil’ O already had a monster regional hit in “Back, Back,” but like every other rap album on Atlantic Lil’ O got little promotion and failed to move units. Not surprisingly, what many consider Lil’ O’s best work came before the major deal in the form of “Blood Money.” This once hard to find album recently got the “deluxe” treatment from Bar None Ent. and comes to us here with a bonus 2nd disk consisting of the chopped and screwed version. In recent times Lil’ O’s career has seen a resurgence of sorts with the release of a “Greatest Hits” collection and some decent radio-friendly tracks, but nowhere is he truer to his S.U.C. roots than on his debut.

The album opens up with the title track where Griz provides a dark mixture of horns, and bells while Lil’ O spits gritty street lyrics:

“My confessions as a changed man, a young adolescent
Now we thug niggaz hustling, counting money and blessings
Learn lessons of the game, I study crooks like books
Boss taught me how to pimp hoes, and cocaine cook
I overlooked the thoughts, of living right
Be consequences, yes indeed I had to pay the price
The confiscation of my freedom, what a sacrifice
Not scared to die, but still I lust forever lasting life
But I ain’t crying I’m grinding, can’t stop young nigga striving
Planning hostile take overs, power moves and perfect timing
Now my roof’s popped up, my bitch bopped up
My pockets overflow, like a toilet stalked up
Picking up niggaz hoes, drop em off knocked up
And if they nigga plex, I leave his chest locked up
I’m coming up, so why these haters talking down on O
Man I bought you boys tampax, you niggaz is hoes”

“Victory N’ Gold” follows and puts a celebratory spin on the street tale as Will Lean and C-Note of the Botany Boyz join O. The album’s best known track comes next as Big Moe, Mr. 3-2, and H.A.W.K. all show up to lend O a hand on “Playaz Get Chose.” Big Moe handles the smooth hook and every one reps hard, especially Mr. 3-2 who breaks it down precise:

“Now playas – never – sweat these hoes
Spitting game at her while I’m riding on vogues
Steady getting chose like a broad often
Broads love the way this big boss be flossing
For the 9-9 I let a hoe be a hoe
She won’t leave me alone, keep calling my prime co
I have to like her for giving me the twat
Just cause your baby daddy on lock
My game don’t stop some of these broads is crazy
Running around saying she pregnant with my baby
Wanting to be my lady put her back in my Mercedes
For the year two triple O man these boppers can’t fade me
And lately I been knocking them out by the dozen
Her – her sister and her fine lil cousin
All in the same week, man these broads are freaks
Better keep ya condom on and leave these broads in the street”

While Lil’ O can hold it down by himself, it is the S.U.C. features that bring the best out of “Blood Money.” “Thug Niggaz” finds Big Pokey and a young Lil’ Flip on the track, with Lil’ Flip showing his age by declaring “making cash skipping class.” E.S.G. and Al-D provide the support on “Friends Turn Foes.” Even the man himself, DJ Screw, shows up on “Rags to Riches” where he is joined by Fat Pat and Yungstar. Though the track is entirely too short due to a limited Fat Pat verse, it’s a classic S.U.C. collaboration. S.U.C. isn’t the only click representing as close affiliates show up on “Who’s Snitching” where Pimp C even provides the production. Plenty of features are always included on classic S.U.C. albums, but Lil’ O can also hold down a song by itself and nowhere is it clearer than on “When God Made You” where he dedicates the first verse to his mother:

“When I was down who picked me up, through all my stress and strain
Laid my head on her chest, and said confess your pain
Wiped the tears from my eyes, when they fell like rain
Then hugged me tight, and said life is like a test young man
Pretty thing black queen, no other divine
Angel sent from the heavens, sweet mother of mine
Makes me wonder how this world, could take a mother of five
And send her to the early death, when only love was her crime
Got me yelling out, why cancer take her Lord
But then I stopped, cause you taught us keep our faith in God
But when I think how you suffered, damn it makes it hard
At 39, you ain’t ‘pose to be in no graveyard
Plus you worked so hard, for everything that you had
Five kids from one man, never cheated on dad
And even when times were bad, you always kept it hid
Cause wasn’t no sacrifice, too great for your kids see”

The message is simple and heartfelt and would compel even the hardest player to sing along to the hook.

“Blood Money” is already considered a classic among fans of the Screwed Up Click and the “Deluxe Edition” will only help the album keep that distinction. The album takes us back to a time when albums were a family affair and features weren’t limited to whoever was hot at the time. The production also is a throw back to the funkier, darker California inspired music that dominated during DJ Screw’s time. For those Lil’ O fans that didn’t catch on until the major deal this is your chance. Old fans can use the “Deluxe Edition” as a chance to replace that old copy that got scratched or add the “Screwed and Chopped” version to your collection.