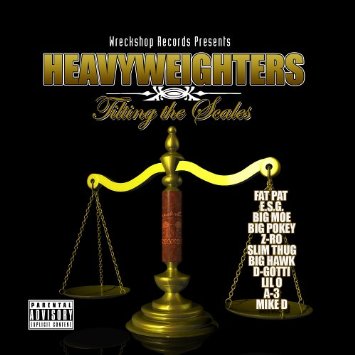 Wreckshop Records has a long and storied history in Texas rap. At one point the label’s roster featured the three most prominent Texas rap stars with E.S.G., Big Moe, and Fat Pat in the late 1990’s. Fat Pat, brother of the late Big Hawk and immensely popular hometown hero, met a tragic demise in 1998 when he was murdered over a dispute involving concert money. Big Moe had massive local success with the label but failed to convert that into nationwide success with his slept on “Purple World.” E.S.G. was one of the original Texas superstars with his early albums, “Sailin’ Da South” and “Ocean of Funk.” E.S.G.’s latest was on East Coast indie label Sureshot Recordings, so the only star left on the Wreckshop Records roster may be Big Moe. The reason for the rapid descent from independent powerhouse is due mainly to the loss of the label’s two biggest stars and a failed national deal. Since Big Moe was unfairly shunned by rap fans across the country the label has seemed content with flooding the market with compilations consisting of older music taken from other albums. It’s a formula that is usually only followed by labels that are content in admitting their best days are behind them.

The songs included on this mixtape/album are solid but definitely not the best songs that Wreckshop has released, those songs can be found on the countless “Greatest Hits” CDs the label has already put out. Instead, “Da Heavyweighters” consists of some semi-hit songs, but is mostly made up of strong albums cuts that Wreckshop fans should be familiar with. Big Moe is the main rapper featured on the mixtape, appearing on six cuts. Four of those songs are from one album though, “City of Syrup.” Another thing to note is the fact that Big Moe’s biggest hit from that same album doesn’t make an appearance, the syrupy smooth and catchy “Barre Baby.” The cuts that are included are not bad at all. “Mann” is the Texas version of Black Rob’s “Whoa” and had success in the state when it came out. Big Moe also goes past the usual interpolation by tweaking the original beat to add Texas funk to it. Another dope track from Moe is “My City Screwed Up” from his “Moe Classics” CD.

Outside of Big Moe, the other two mainstays throughout the compilation are the previously mentioned E.S.G. and Fat Pat. Fat Pat gets a couple of cuts from his first two albums here, though they too aren’t his strongest cuts. “Top Drop” might be the closest thing to a Fat Pat hit on the CD but unless you were around when the song originally dropped the very familiar sample may be too played out or cheesy for you. E.S.G.’s contributions to the project are actually the strongest. “Grippin’ Grain” with Slim Thug, “Do Ya Love The Southside” with Fat Pat, and “Boss Hogg” all find E.S.G. at his best, but the beats also suffer from samples that have been used before by others more than once. Appearances from Big Pokey, Hawk, and even Z-Ro help add variety but don’t raise the quality level much.

If you were already a fan of Wreckshop Records then chances are you would find the purchase of “Da Heavyweighters” a waste of money. The album does feature a bonus disc screwed and chopped by Young Sam (though he has a tendency to chop too often) and it presented as a true mix as both Young Sam and DJ Chill blend the songs into each other well. But if you already have Big Moe’s and Fat Pat’s CDs then you won’t be getting much new music. Even if you’re new to the label this album may still not be the wisest choice. With Big Moe and Fat Pat both already having released high quality greatest hits compilations, a newcomer might be served best purchasing either one of those. So in the end this album is best suited for those who either really want these particular songs mixed on one CD and chopped and screwed on another or for those who have already heard Wreckshop’s greatest hits and want to explore what else the label has to offer without having to invest in multiple albums.