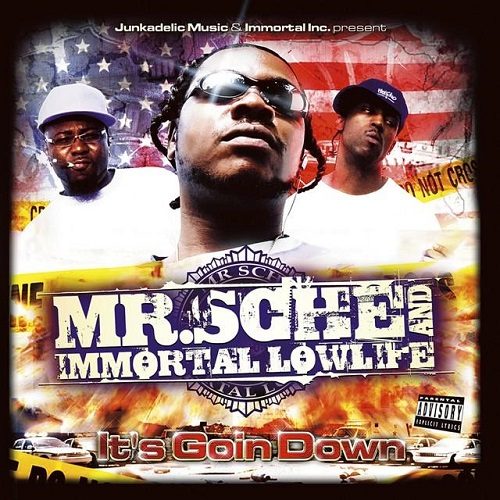 “My story behind this album: Just keeping it real. I ain’t no muthafucken saint, never said I was. this is the only life I know. Gangsta Stories. Pimp Stories. Hustla Stories. My music is a true reflection of my experiences, and my life. Listen and learn. Hope you enjoy the bitch…” – Mr. Sche

It’s refreshing to hear and artist be so up front and honest about his work. Though this liner note declaration is simple, it says a lot more about Mr. Sche than the countless interviews you hear from other artists. Mr. Sche ain’t claiming his album is going to be the hottest of the year or that it’s realer than the next man’s. He isn’t even claiming to deliver that well rounded album with a little bit of everything. Nope. Mr. Sche is all about gangstas, pimps, and hustlas because that’s all Sche knows. You can love it or hate. I first peeped Sche after he got some buzz from the “Hustle and Flow” soundtrack and have been a fan ever since. Mr. Sche used the exposure to sign an international deal with Junkadelic Music, the same label that has dropped some Kool Keith and Marc Live albums recently. Despite the major deal, Mr. Sche has stayed true to his musical and hustling roots. The packaging may be a little glossier, but the content is still gritty and gangsta as ever. You can still hit up Mr. Sche’s website to get his new releases and pressed CD-Rs of his underground albums and you can even request them autographed. Everything about Sche exhibits that out the trunk success story first made famous by Too $hort. On his latest he brings along Immortal Lowlife to give them some nationwide shine. The group’s singular name can lead to confusion and it has never been too clear who exactly makes up the group. Blue Boy and PimpMinista seem to be the two other core members aside from Sche. Regardless of the supporting cast, it is Sche who holds down the fort providing dark, crunk and buck beats to keep the Memphis legacy alive.

The album kicks off with Mr. Sche thanking us for copping his album and then dropping a hard core anthem, perfect to ride to. “Let’s Ride” features the pounding bass, rolling snares, and funky piano riffs made famous by the likes of the Three Six Mafia. “I’ll Never Change” follows and keeps up the superb production while Sche exhibits raw honesty:

“Fresh out the studio, straight to the dance floor
There be some macks in the place, where the super hoes?
I’ve been devoted since the game showed me how to score
Two birds with one stone, bitches and good dope
Yeah, we the Mack Pack, playas from way back
Stood in the game, out the frame, how you love that?”

Mr. Sche won’t ever win awards for his lyrics, but his honesty stands out and will leave an impression on any mind. The title track that follows shows Mr. Sche can flip the production as he loops a string sample in a manner that harks back to the mid-1990s. Immortal Lowlife represent on this one and claim to have an “attitude, muscle up like Rick Rude” and “pull a Ric Flair, hit your ass with a “Woooo!”

Immortal LowLife provide some good variety on the tracks, with only one member lacking a solid flow. Still, it is Mr. Sche and his reality raps that tend to hold the album together. “Front Me Somethin'” find Mr. Sche and Immortal Lowlife broke as hell and needing a loan from somewhere to pay the bills. The lack of a loan leads to “Take The Pain Out” where Mr. Sche declares he’s going to get money any way possible on the intro, but then cools off as he smokes some weed to forget his problems. After the effects of the weed go away, Sche is back and serious as ever as he reflects on the struggles to get recognition in his own town on “Hard On A Bro.” Mr. Sche’s peaceful pleas are quickly forgotten on “Middle Fingers Up” where he drops diplomacy for aggression. The aggression coninues on “Some Nigga Think He Hard” and “It’s A Fight,” both tracks are only missing a “Yeahhhh!!!” and “O-K-K-K!” before they become certified hits. “It’s A Fight” features fellow Memphis heavyweight Al Kapone and captures the emotion of a fight in a club in all it’s simplicity:

In my newfound maturity I’d head in the opposite direction of the fight, but a few years back I wouldn’t care who or why, as long as someone was getting beat.

After all this, we finally reach the midpoint of the album. As is the case with a lot of underground albums, Mr. Sche and Immortal LowLife go 21 tracks deep on this one. “Keep Hatin'” subdues the violence as Sche simply states he’ll keep hustling despite the hate. “Motivated” follows and proves once again that no matter how many times a Memphis group uses the word “motivated” in a hook, it sounds dope as long as the beat is bumping:

“We some grown men, and elevated
Every time our status reach the sky, you suckers hated
We’ve been doing it since the dirt was dirty, we motivated”

The crew uses the track to reflect on their individual grinds up to this point in their career. The deep reflection continues on “Rain” where Sche sounds especially depressed:

“Lord Let It Rain!
Let it rain, rain on my eyes
I don’t want the world or let my son to see a G cry
Lord Let It Rain!
Everyday I do more than try
I just want to see some real money before a nigga die”

After the moment of reflection Mr. Sche goes into full player/pimp/mack mode as he drops a string of confident boasts. “G Like Me” features one of Sche’s more interesting beats as he speeds up a guitar sample while Immortal LowLife brag about what they got. “My Pimp Shit” drops next and is one of the album’s strongest songs as Sche mixes some real funky horns, flutes, and bass to give us a real player’s anthem:

“I been a hustler
Riding and smoking weed since I was seventeen
These hoes just love my pimp shit
Want to suck and ride my, my pimp dick”

The album drops five more tracks concentrated on pimping and sex before Sche drops “Sail Away,” a mellow track that sums up Sche. Despite the hustling, pimping, and gangsta lifestyle Sche spits about, in the end he’s just a man trying to feed his family one way or another.

Just like Mr. Sche is a man of contradictions, I find myself in the same dilemna. In any given week I’ll criticize a rapper for dropping the same gangsta cliches I’ve heard all my life, but the next week I’m buying the latest Sche project. The difference maker here is that no matter how much Sche’s music stays true to his Memphis roots it never comes off as mere imitation. Sche’s beats are dark and buck because that’s the music Sche came up on and he’s not going to change that just to try and score a hit. Sche’s raps are about the same gangsters, pimps, and hustlers that have inhabited Memphis’ streets for years, but they are HIS raps about HIS experiences. But in the end I don’t have to justify my choice of music, just like Sche doesn’t have to justify his reason for making it. If you like great, honest, and hardcore gangsta rap Mr. Sche’s got it. If you don’t like it – Mr. Sche’s still got it, but you don’t have to buy it.