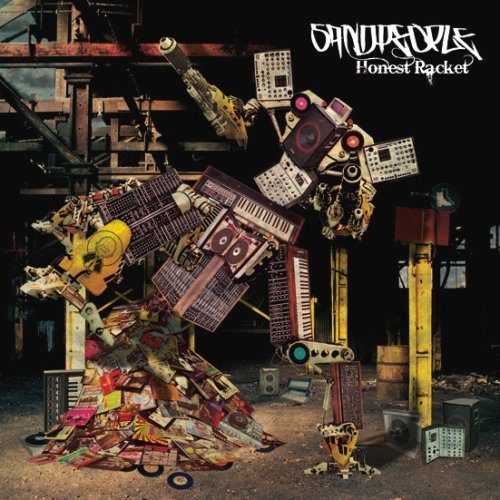 This is the third album by Portland’s Sandpeople, an eleven-member collective who have been around since 2004. The group includes Al-One, Ethic, Iam, Gold, Illmaculate, Only, Mo-B, Sapient, Simple, and DJ Spark. Their bio mentions the fact that most of the crew hadn’t even met when they recorded their debut album, “Points of View,” and it was only after recording their follow-up “All In Vain” began that they all were introduced. “Honest Racket” offers up sixteen tracks of underground, Northwest hip hop, adding to a vibrant scene that includes acts like Othello and the Lifesavas.

The album starts off with the crew flying their indie flag high over an industrial beat by Sapient:

“I duck the limelight proudly
If you see me then you probably wouldn’t doubt me
When I say there’s nothing Hollywood about me
Fucking A-list just a bunch of K-Fed’s claiming they made it
Made what? (I made it to the top, dog!)
Shut up, you ain’t made shit
Most your fame’s derived from luck
Right place at the right time
If you get signed it doesn’t matter if you suck you’ll do just fine
Lose your mind thinking you’re God’s gift to music that speaks the truth
Until your 15 minutes are up and we’re like ‘Where the fuck did you go?’
[…]
Now that we out of the gates our crew makes its case for hardest working
We 10 deep these pens speak but we remain observant
Make ends meet but rent’s cheap and music’s most important
Now we got heads either nodding or turning towards Portland”

I definitely respect where these guys are coming from. I like the fact that the Sandpeople are DIY and underground, and I appreciate that they go for more honest, thoughtful lyrics. They talk about the frustrations of being young and broke on “Lose It,” and on the beautifully sad “Not Alright” they drop lines like “sharpie my existence on the inside of your eye/so you’ll never forget the vision in which beauty lies/I’m ugly/or says the two-way mirror.” I particularly enjoyed the more psychedelic side of their work. I’m a huge fan of Lil’ Wayne’s “I Feel Like Dying,” and it always makes me happy to see other artists go off in a trippy, drugged-out direction (lyrically, that is).

Simple and Sapient provide all of the beats, and most of them are on point. They particularly excel at infusing an electronica quality to their work, perhaps a remnant of Simple’s days as a trance DJ. They also layer in a lot of different types of instruments, like the acoustic guitar and xylophone on “I Don’t Care,” the drum, bass, and organ on “Group Home,” and the horns on “The Air We Breath.” Some of the tracks are too mellow or generic sounding for my taste, but for the most part they do a good job on the knobs and turntables.

It was impossible for me to keep track of all of the MCs, but not all of them are genius on the mic. There are a few of them whose flow has an exaggerated, forced quality that I just can’t get into. I call it the Eminem disease where MCs try to ape Marshall Mathers’ when he’s being VERY SERIOUS. It ends up sounding too much like play-acting, and not enough like rapping.

The Sandpeople have a lot going for them, but “Honest Racket” doesn’t quite manage to harness their magic. The end result is an album that is decent but not great, made by a crew who are more exciting because of their potential than their output to date. Still, I’d rather listen to a crew like the Sandpeople, who are at least trying to take rap in an interesting and positive direction, than suffer yet another gangsta crew bragging about crimes they haven’t committed and jewelry they can’t afford. “Honest Racket” may not get heavy rotation on my stereo, but I’m going to keep my eye on Portland.