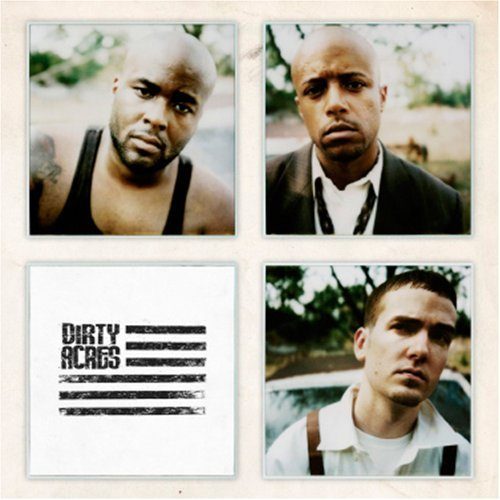 “It’s easy to move muscle, bone, skin and sinew
Movement of the mind is the type grind I’m into
So I kick the mental, over sick instrumentals
Get respect with the pencil, never flex with the stencil
I’m in love with the artform that still keeps my heart warm
Presented with the most virtuous intent, but in a hard form”

I could listen to Big Rube kick poetry over pianoes all day long, especially with heartfelt lines like “as long as we breathe, hip-hop gon’ breathe with us.” Sadly a Big Rube album has never been released so listeners have to settle for spoken word intros like “Never” on albums such as CunninLynguists’ “Dirty Acres.” Quiet as kept these verbal pugilists have been punching out underground classics for the last seven years, “Southernunderground” and “A Piece of Strange” among the critically acclaimed KO’s. The lineup of the group has varied a little over the years, but Kno and Deacon The Villain have been down since their inception and Natti has been in the crew since 2004. Minor lineup changes have therefore had not an iota of effect on their sound – in fact Kno’s consistently quality production on beats have made them one of hip-hop’s most underappreciated groups.

European label Bad Taste Records showed surprisingly GOOD TASTEin putting out CunninLynguists brand new “Dirty Acres” CD. While the CunninLynguists may move units in the thousands rather than by the millions, the quality is not unlike that of an artisanal bread – easy to appreciate no matter how little or how much is actually produced and consumed. The inherent danger is that this often tends to breed a certain snobbery among aficionados who view the product as their exclusive domain – a secret to be kept and not shared with the masses because mainstream awareness would somehow taint the product’s quality. Unfortunately it is this very attitude which is so damaging to so many artists of all kinds. Once something is mass produced, whether good bread or a good album, the creator clearly intends for as many people as possible to enjoy it while simultaneously profiting from a quality reputation. In the process of enjoyment you may find your soul nourished as much as your body.

Kno: “Georgia, my state my home
For 17 years learned right from wrong
Cried saline tears when I write these poems
As I fade these fears give flight to song
The red clay stains the soles of my shoes
The red clay stained the soul of a fool
My grandparents told me the goal that you choose
when you realize the world’s only open to few
will measure yo’ worth, tether yo’ hurt
It’s the same search that can lead you to church
But if they have time, to hate a whole race
How do y’all have the mind, to tell me ’bout my faith?
Do y’all have time to discuss God’s grace
if you’re too busy studyin the color of a face?
I don’t follow man to avoid the disgrace
of the close-minded culprits of Souther mistakes”

Songs like “Georgia” are the rule and not the exception on “Dirty Acres.” This album is filled with very personal and heartfelt Southern hip-hop experiences, delivered in a way that transcends the environment to share the vibe with a broad audience. The silky slick melody of “Things I Dream” weaves together symphonic strings and pulsating conga drums with Natti’s inherent distrust of the very industry he participates in: “Aim at rappin clay targets while labels move like the Masons.” The CunninLynguists dream of a fair and impartial world while remaining grounded in the harsh realities of a “world crooked like St. Ides.” This balance is carefully tread throughout the album. Sometimes on tracks with Devin the Dude things are “Wonderful,” while “Yellow Lines” collaborates with Phonte and Witchdoctor to “express things most niggaz scared to say.” Things may turn cold when “Summer’s Gone” but the upbeat closer “Mexico” offers this colorful adage: “Let’s go down [to] Mexico, where the reefer is cheaper and the sex is slow.” WELL THEN!Despite the hardships of their lives in general and a forced hip-hop obscurity which prompted them to title an album “Will Rap For Food,” the overall vibe is completely refreshing. It’s a rich and full listening experience which is both bitter and sweet in equally appropriate measure.

There is no secret to be kept here for any party involved. A European label would not take the time to press and distribute an album by a rap group from the Southern United States if not to profit from it. CunninLynguists would not take the time to record and promote it if they didn’t want to eat from the fruit of their labors. On “Dirty Acres” the CunninLynguists reap what they sowed and the result is an abundant crop of high quality music. If you’re only just now becoming aware of the CunninLynguists from this review, start with “Dirty Acres” and work your way backwards through their catalogue. The rap group Ugly Duckling once encouraged listeners to “Taste the Secret” and this review wants you to do the same thing with one exception – share that secret with others if you enjoyed the flavor so that the CunninLynguists aren’t a secret any more.