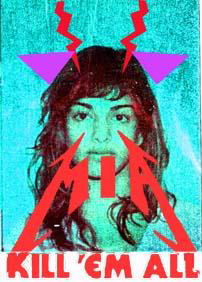 The date: 20th December 2007.
The venue: The Coronet, London.
The event: Awesome and Amazonian goddess M.I.A. in a ‘last night of UK tour’ musical concert extravaganza.

First things first – if you don’t know precisely who M.I.A. is, check out the reviews of her first two albums “Arular” and “Kala.” To summarise, she is truly one of the most exciting artists on the planet – a raw and worldlier Missy Elliot, if you will. She even managed to get Gold and Silver medals in the “Year End Review 2007” for “Kala” (I placed her second, Susan ‘SusiQ’ Kim put her as Number One) so that tells you something.

And here M.I.A. (real name Maya) was, on the last night of her UK tour, finishing up back home in London. First up, I have to mention one of the warm up acts. The first one was an African gentleman, name unknown, who tried his hardest and appeared grateful for the shine. But the second one was AMAZING – remember this name, SANTOGOLD. She was awe-inspiring, and put on a bewitching show. I am going to buy Santogold’s album as a result, and so will the other 1500 people at the concert, I’m sure. She has already appeared on the huge “Versions” covers album by super-producer Mark Ronson, and her profile will only continue to rise. Plus her two dancers were electric. However, she was asked to perform a few more songs than she had originally prepared for – and so I became enveloped by a bad feeling…

It all started when my big brother, who caught one of M.I.A.’s recent shows in New York, described her as “a goddess” – I have never heard him call anyone that, ever. It could well have sent my expectation levels through the roof, but I knew better. You see, I have encountered my fair share of “goddesses” in my many lives. They are wonderful, but capricious; inspirational, yet crushing. For to meet one is to finally find a woman who is everything you thought you wanted, in the form of one look that could crush an army. Be wary, dear Reader, of the goddesses… They are usually more trouble than they are worth, and you will never be satisfied. They are sirens, luring you to an enchanted beach paradise of doom. They are felicitous felines toying with your every whimsy. And they are always bloody late for everything. Always.

You see, she was supposed to hit the stage at 9.20pm, hence Santogold having to perform extra songs. But by the time it hit 9.50pm the natives got restless, and started to get extremely wound up. And as soon as the clock struck 10:00pm, the unthinkable happened – almost everyone in the crowd started booing, most mercilessly, heckling the non-existent shadows filling this empty stage. Another ten minutes passed and thank goodness, the lights dimmed. People were extremely unhappy, and I still have no idea why Maya was so late, but it was truly unacceptable and cast a dark cloud over much of the show. Still, the visuals (which were absolutely top notch throughout) kicked in with “Bamboo Banger” in perfect symphony and the crowd cast aside their pride and went WILD. The first three or four songs created intense crowd movement, the likes of which I have never seen before – it was spellbinding. The energy was off the chart, and you suddenly felt that you were in for something special here.

Sadly it pains me to say we were all wrong. The concert, for a number of reasons, did not work out as well as it should have done. And here is why:

– It was the last night of the UK tour, and M.I.A. should have been triumphantly slaying the stage, but she seemed dwarfed by it, shaken up by the booing, and unable to command attention;

– The on-stage DJ (name unknown) was terrible, absolutely ruining songs with over-use of an effects/sampling pad (imagine sampled horns over nearly every part of every song) and he couldn’t even mix on beat;

– The venue was initially freezing, the sound was appalling ear-bleeding prehistoric claptrap and I will not be returning there in a hurry;

– Bizarrely, Maya’s unimpressed-looking family were all there (by that I mean aunties and uncles etc) in the front row at the back and it almost seemed to put her off at times;

– Her lateness was a terrible start, and (aside from the cacophony of booing) had undesirable after-effects, in particular having to miss the last couple of songs (including, I can only assume, “Paper Planes”) as the concert dragged 40 minutes past the intended time.

Now, I make it a rule not to really listen to my brother, but he obviously saw a great New York show – and I didn’t get quite as lucky. Therefore, I am willing to give M.I.A. the benefit of the doubt and dismiss this as a series of unfortunate incidents. There were also numerous highlights, including a couple of magical moments that survived untarnished: witnessing the birth of a potential future superstar in Santogold was welcome; Afrikan Boy did well in the encore to perform “Lidl” and his guest spot in “Hussel,” with the crowd going bananas; M.I.A. herself didn’t skimp on any tracks and the track selection, although ruined by the inept DJ, was at very least comprehensive and combined well with awesome visuals; and the crowd not once, but twice, were invited to rush onto the stage and those lucky ones had the biggest smiles in the venue. That, alongside the fact that she is making some of the best music on the planet right now, was just about enough to save the show from ignominy. Don’t get me wrong – this wasn’t an epic disaster of Amy Winehouse-like proportions. Still, the punters were left somewhat disappointed and it was a shame: the crowds can still turn on anyone if given enough reason, goddess or not.