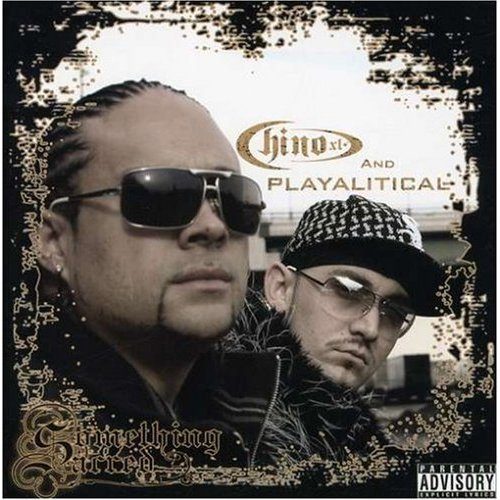 There are few better illustrations in hip-hop of underground versus overground than a Chino XL record. The relentlessly lyrical punchline poet from East Orange, New Jersey has been critically acclaimed for over a decade now. The man born Derek Barbosa has more bars spit than Derek Jeter has hits in a distinguished rap career. In fact in threestraight reviews on this website he received nothing less than an 8 out of 10 for his rhymes, even managing to score a perfect ten. Unfortunately a man who is legitimately smart enough to be in Mensa International stands little chance of thriving in a rap mainstream awash with idiotic lyricists like Shawty Lo and Soulja Boy. The only place for hip-hop artists too smart for radio to thrive IS the underground, where a small but highly devoted cult following can support what often gets dubbed “progressive rap.” Whether an artist thrives in such an environment is entirely up to them. Anybody making music to be famous and wealthy and “party like a rock star” probably won’t be happy in the underground, but those who value artistic self-expression first and foremost can still make a modest living from the fruit of their labor. One thing has remained true since the dawn of recorded music though – if something rises in popularity in the underground, sooner or later someone in the overground will notice and/or want to cash in. The inevitable cultural clash erupts between purists who believe underground artists must remain “independent as fuck” and those who feel (and rightly so) they deserve to get paid for their hard work.

With 2008’s “Something Sacred” Chino and his new partner-in-rhyme Playalitical linger just on the edge of that threshold between underground and mainstream. Chino has been there once before as he scored a few minor crossover hits on his debut album, particularly the somber and somewhat depressing anthem “Kreep,” a song where XL mixed up his rapping with a little singing and told a tale of woe many people could relate to. Nevertheless it’s inherently in Chino’s nature to be a hater, continuously disgusted by lesser MC’s who dare to breathe the same air he does into a microphone. Chino XL is at his most entertaining and witty on songs like “Jump Off” when he refuses to hold back his disdain and spits egotistical bars illustrating why he is such a highly regarded lyricist:

“I don’t wanna hear your rhyme, no I don’t wanna meet you
I put blood on your jeans ’til they lookin like Evisu
I beat you, accept it, the illest with no effort
27 bench warmers, the judge said that’s a record
{*ahem*} Effective immediately – e’rybody run
Could kill rappers day and night and my job’d never be done
Pre-eminent, G evident, the sentiment
We gettin it (ooh-wee) money from how we pennin it
Fre-quently, delete, your name off the marquee
Half your rhymes you got from XL, so don’t start me
They have me on tape wearin that black mask again
Right with Ray J pissin on Kim Kardashian (AHH!)
Chino’s here, rappers prayin he can’t shine
Like mountain climbers hangin prayin there ain’t no landslide
I slap the FRUCK out you, ain’t nuttin funny
Jumpin off the top of the world, land on mountains of money”

You might think it hard for a rapper whose vanity is borderline to insanity to craft a radio-friendly hit, but there are several selections within the 15 tracks of “Something Sacred” which fit the bill. Playalitical’s bouncy beat makes the perfect backdrop for Chino to collabo’ with Bizzy Bone on “Be With You,” a song where the former raps and the latter sings about what matters to them most:

Chino XL: “I almost broke down in the middle of the session
I can’t go on MapQuest to find my life direction
I’m a mess when I’m away from little Bella
Away from little China, or my daughter Kiana
It’s they future I’m invested in
My man ‘Litical whose lady is expectin (God bless ’em)
My homie Adrian lost his son Little A
So Chino close his eyes while Bizzy Bone sing”

If on the other hand the mainstream wants something a little more rugged, Playalitical’s production on “Bat Signals Up” is reminiscent of an Eminem track for all the right reasons. While he’s not a rapper of Chino’s calibre his stock rises just by sharing mic duties with him:

Chino XL: “Chino, ill as they come, ass and tongue
Pack guns, I eat crack, you niggaz is rappin for crumbs
Murder jump out my lungs, punch out nuns
Punch out your gums, go dumb, I’m settin fire to bums
Y’all niggaz is scums, won’t pull the heat out
Your heads is sunflowers nigga, I’ma punch the seeds out
Ladies love it when I act this way
Bringin +Celebrity Deathmatches+ without the clay â€“ one!”

Playalitical: “I won’t take losses; I take faces
Got cases the size of Jimmy Dean sausage
The big fish in the pond that he got fish
Moby can’t fuck with ‘Litical, he’ll get nauseous
Get cautious, watch as we ship boxes
You on my time now, switch watches
Switch places, expose all you dick faces
Adapose player because I went places”

Playalitical’s best role on the album is undoubtedly as the man on the boards, because the beats are almost all his and “Something Sacred” is musically solid from start to finish. Unfortunately when he steps into a more prominent role he can drag the album down, as his delivery varies from uncharismatic to nearly monotone. This is most prominent and obvious on tracks like “All I Ever Hear,” where Chino doesn’t even get a verse in lieu of Playalitical doing a rap with Duce Stabs. I mean no offense Playa, but you got outshined by a guest rapper on a song on your own album, and nobody’s even fucking heard of the dude. These flaws are easy to overlook given the strength of solo Chino XL tracks like “Posiden” and the dark piano banger “Stay in the Lines.” There’s definitely a lot more to love than there is to hate, which has been the case with every Chino album since his first release date. Chino is a smart enough dude that he can be a success at any endeavor – it could be acting, rapping, writing screenplays, hell even biochemistry or nuclear physics if he felt like it. The fact the album is titled “Something Sacred” is telling though – Chino XL still views artistic self-expression as valuable not just for its own sake but for the beauty and even joy it can bring to the masses. Whether that audience is ten thousand or ten million, XL will keep on spitting sacred bars for whoever’s willing to hear them.