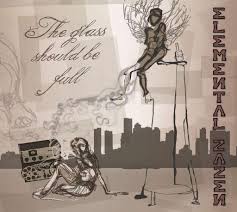 Elemental Zazen :: The Glass Should Be Full

It’s safe to say Elemental Zazen has one of the more interesting names AND hip-hop pedigrees to come across my desk in a while. Jason Trefts has seen a lot more of the world than many of his U.S. peers, given that he grew up both in Saudi Arabia and China as the son of international school teachers. Far from being made submissive and complacent in such authoritarian and strict environments, Trefts’ internal focus and dreams of being of a hip-hop revolutionary crystalized and became even more focused. That’s only where his story BEGINS though – in 2006 his home and almost all of his posessions burned to the ground in a fire, and in 2007 he was diagnosed with a brain tumor so life-threatening he had to undergo IMMEDIATEsurgery.

Few people could come out of such adversity bearing so many emotional and physical scars only to declare “The Glass Should Be Full” instead of looking at everything (including your own skull) as being half-empty. Whether or not you’d be impressed by Elemental Zazen’s album you’d have to give it up simply to his resilience, persistence and positivity. In fact according to Zazen’s bio he actually started writing the raps for this album while recovering from his surgery, and I’m man enough to admit that I couldn’t have done the same. I’d have been lying in the hospital bed with a TV remote instead of a pen and pad, clicking the button for the nurse just so I could bark out “Morphine and keep it coming!” Thankfully this isn’t a story of an inspirational artist who overcame the odds just to put out a mediocre album trading on sympathy instead of artistry. “The Glass Should Be Full” wastes no time coming out the gate strong on the Confidence and J. Ferra produced “Silence of the Now,” featuring Zazen’s rapid-fire delivery over a funky bassline and melodies that fade in and out like passing traffic.

“High on meds die on beds made of Zion’s threads
It won’t change until we spy on feds
So fuck a bye-gone the sky gone cause Mayan’s lead
Us to the future with a calendar of dates & fates
Intertwined like the church and the state
with a merciless taste
Our blank slates turn to virtue less traits
Conditioned in the mind by hurtful debates
Between our mom and her mates
Or between our father and whoever he dates
And we’re left to second guess ourselves
until it’s too late
Nobody tells us what compels us is shell that relates
We crawl inside with our pride and rebel till we hate
Blaming the world for what we feel words concealed
So deep within our skin, we’ll never begin to reveal”

Ponder for a minute that Zazen has a not insignificant chunk of his cranium permanently missing and he can still pen raps with multiple interwoven rhymes and intelligent design. Don’t assume Zazen is a poet trying to crossover to rap without worrying about the beat or the flow – his breath control and diction are up to par. It’s a minor knock to say that on occasion the production drowns out his vocals, but the verbals that Zazen is spitting are definitely worth a second listen and closer inspection, such as on the Kno (Cunninlynguists) produced “Hanging by a Thread”:

“They know what pain is when it’s plan-ted
Wandering around enchanted by everything they tell you is romantic
You start to panic cause you’ve taken it for granted
More than semantics, your opinions unfairly slan-ted
It’s dangerous to risk
Use your religion as a trick, accept that you exist
Seek a fix a trip, slit wrists to slip
Further away from the grip, you thought you had on the myth”

There’s not a whole lot on “The Glass Should Be Full” to knock Zazen for. He’s comfortable over a broad range of beats, from the staccato pulse and piano riffs of “No Survivors” to the slow marching drums and trancelike sounds of “Life Is Priceless.” Zazen is also a top caliber lyricist, a rare treat in a genre where being thoughtful and insightful is often treated like a sinful vice instead of a saintly virtue. It’s a shame to say Zazen’s biggest problem here is that his album is entirely inaccessible to those who like their music real crunk or real pop. It’s not as though Zazen is intentionally trying to avoid selling records, it’s just literally impossible for Zazen to “Dumb it Down” enough to reach the mainstream. Consider this an arthouse record if you like, but if you want an album that means something to you AND to the artist who made it, “The Glass Should Be Full” is for you.