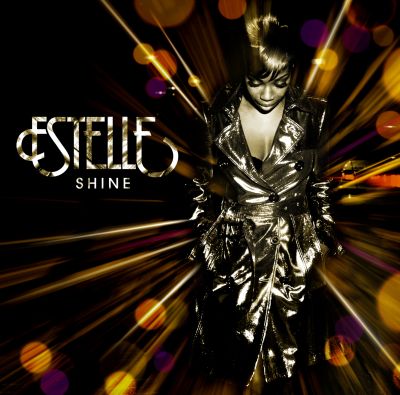 What makes some records sell, and others fail? How can seemingly similar albums, with marketing budgets on parity with each other, not to mention chart-topping first singles, differ so wildly in levels of success? The answer is simple. But I’m holding that card close to my chest. After all, you would just read it, look at the score and then bugger off. No, no – this time, you must “Wait A Minute.”

With regards to Estelle, imagine the following conversation between her representatives and a big American label:

“Hey Larry, I’ve got this amazing artist for you, her name is Estelle.”
“Nice name… I can see the dollars rolling in-“

“Pounds, actually – she is British. From London.”
“Hmmm we could spin that – just get her to sing a song about liking the USA or an American Boy. She is hot, right?”

“Well, Larry, looks really are more of a subjective thing…”
“Right, right, I hear ya. Can she sing?”

“No prescribed medication, we ran the hereditary tests. She can’t rap too well, though.”
“Don’t worry, we can get Kanye on there. So she is an average singer, can’t rap, and won’t get on any FHM lists… What can she actually do?”

“Yeah, OK… She is friends with John Legend, Cee-Lo… All big names, Larry – success via association, you know how it works.”
“Sure, sure. Well, if the beats are hot, we can always do something. By the way, do you know if Leona Lewis is single? I’m thinking we could do a whole Tommy and Mariah sequel thing…”

So that is the long and the short of it. Estelle can’t really sing amazingly. Her rapping has stalled at the distinctly average level it was practically 5 years ago. Just the stage is different – but what a stage. An album with Kanye West, John Legend, Mark Ronson, Will.I.Am, Wyclef Jean, Swizz Beatz… These are big names. Ronson’s solid contribution is the cute dancehall-infected summer jam, “Magnificent.” Wyclef and his pal Jerry Wonda provide one excellent (George Michael sampling) song, “No Substitute Love,” and one slightly weak Lauryn-esque vibe, “So Much Out the Way.” Swizz Beats does his best to fuck up a strong chorus on the closing title track – but at least the production style doesn’t replicate his template de jour (“Tambourine” etc.). Cee-Lo embarrasses Estelle on “Pretty Please” – and Will.I.Am basically saves the day with album opener “Wait A Minute” and the super-catchy UK chart-topping single “American Boy” featuring Kanye (sure, the beat is recycled but global warming is a big issue, you know).

The opening sequence is fantastic, as is the closing run (save for “Shine” which is merely alright) – but the core is a touch weak, a bland brew of unconvincing heart-warmers. Her label boss John Legend clearly feels that Estelle has a big future – and the “Shine” LP is certainly a strong and promising “debut” (let us temporarily blank out the fact that “The 18th Day” was her actual debut almost 4 years ago). The biggest problem is that Estelle hasn’t improved much as a singer, and has regressed as a rapper – but this is counter-balanced by the massive step-up in production values and choruses, which is usually enough to see anyone through.

I say ‘usually’ because I’m not sure that it has been enough to see Estelle rise to the top. Of course, “American Boy” is massive in the UK (although it has yet to make a true mark in the USA). But I have had the benefit of having the album for nigh on 4 weeks, now (and this review would have been in last week, were I not out-foxed by the release date being brought forward). The album has not sold particularly well in the UK – sure, it charted at No.6 but has dropped 8 or 9 places week by week, and is already out of the Top 40. That is not the sign of an album that people believe in, especially compared with the success of 1960â€™s throwback soul singer Duffy. That Estelle had the audacity to question white singers like Duffy and Adele singing soul albums was not bad in itself, but the way in which she did was fucking stupid, and is the very crux of my argument in the opening paragraph.

My main issue with “Shine” is that it is practically devoid of soul, in any capacity. By that I mean feeling, emotion, connection. Sure, I am not the biggest fan of Adele, but Duffy’s album has a good measure of believable “soul” in it. Compared with the passion that Amy Winehouse pours into her music (and her convoluted media assault) Estelle should not throw stones in glass houses. Having listened to her album for a month, I feel no real connection with it. Sure, it is fun background music, and is peppered with a few amazingly catchy tracks. But “Shine” is an apt name – it truly is a summer sunshine album, one that you will enjoy this very summer. But it is just a month-long fling that you know will end before the season’s end. Why? Because she has already moved on to the next one, without telling you it is over. That coolness is the precise reason that “Shine” hasn’t sold well in her homeland (coupled with alienating the majority of your white audience). Things to remember for her next album: learn how to rap or let someone else do it; don’t try to match Kanye West’s big controversial mouth, he does it much better than you; and pour some real feeling into your work, it will make all the difference. Other than that, an enjoyable summer fling – just try not to get too attached, she be gone in the morning without so much as a note.