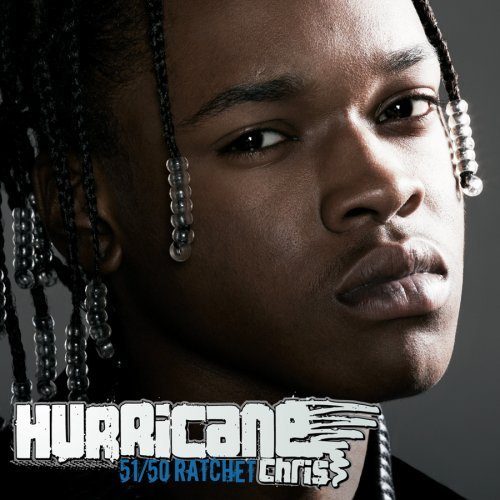 I’ll admit it–this isn’t exactly the most timely of reviews, in fact, I had to shuffle through the archives to make sure that Hurricane Chris’ debut was not already covered by our fine staff at Rapreviews.com (nope, not there). At this point Hurricane Chris has pretty much gone the same route as the Young Berg’s, the D4L’s, or the Lil’ Mama’s, in that he presented the notion of some kind of profound movement when he hit the scene (the Louisiana-based â€˜Ratchet Music” in this case) but fizzled out as a so-last-summer artist in the ever changing landscape of rap music. The young, hair-braided rapper had the world at his fingertips as thugs unapologetically rolled down the Avenue in their low riders bumping that “A Bay Bay,” but it’s hard to say whether he did enough to effectively separate himself from the type of rapper that’ll sink low enough to perform for some rich girl’s sweet sixteenth.

Truth is you already have a disposition to the artist based on how you liked the big-time single; if you like “A Bay Bay” you will check him out (or have), and vice-a-versa. So, for the short attention span of the typical rap consuming public an editorial may not shift any opinions. But, Mr. Collipark does the executive production on “51/50 Ratchet”, which is a wise choice by J-Records and clearly establishes a big budget for the beats. It is clear from the jump off that Hurricane Chris truly does aim for higher sights than most when the bass line for “Getting Money” hits. He uses the introductory track as an opportunity to present the hood life that raised him:

“How could you criticize me for actin like I act if I ain’t never had a thing
My daddy got locked up when I was 12, my whole life changed
My momma hustled hard and did to get the bills paid
While you was probably ridin around the city in your Escalade
But now that I got money, I went and bought me two mansions
Just to stunt on them niggaz who told me I never had it
I walked out the door the other day and my momma told me
You got a lot of nerve, she told me just because we got all this money to burn
Don’t think you can’t be in terms
A cold victim to the street so I stay packin some heat
Twenty-four hours, seven days of the week, ’cause they creep
Twenty-four hours, seven days of the week, I’m a beast”

It is a far cry from the formulaic romp that he is known for, but it is hard to take the lightweight spitter too seriously, given that at eighteen and about a buck soaking wet, he is not exactly a threatening presence. Ultimately the tenor of his voice and his pre-pubescent looks are not the prototypical features of the hardcore artist. It is refreshing to hear him rap so adamantly though and there is good reason to believe that he is trying to take the game seriously. Nicole Wray also guests on the track, offering a solid melody for the chorus.

While the first cut may dispel some non-believers it does not last too long. The great majority of track on the disc are mediocre; from the bling-inspired tinge of “Doin’ My Thang” to the syrupy ode to his mother in “Momma,” the trademark up-tempo snare drums grows tiresome. It all feels a bit over-produced. A song like “Momma” ought to have a genuine heartfelt quality about it, but this one fails to deliver with trite lyrical content.

The problems persist with the forced female track in “Touch Me”. It may be an attempt to distinguish himself from the likes of Romeo and Bow Wow from his age bracket, but is an overly sexualized joint in which Chris indicates that he is going to touch his girls everywhere and take off their underwear. Much of the same content can be found in a much soulful package on “Playas Rock” featuring Boxie. The vocal samples are akin to those on UGK’s “International Player’s Anthem”, and the product is far superior as Hurricane lives up to his name by presenting his rapid fire flow for a number of bars.

Aside from Nicole Wray, the camp around Chris are all fairly expendable. Guests like Big Poppa, Hollyhood Bay Bay, and Big Redd do little to add much to the album. Meanwhile, heavy-hitters like The Game, Jadakiss, E-40 and more show up for the obligatory remix to “A Bay Bay” to close out the LP. Hurricane arguably outdoes these well-known stars, only because the synthetic production fits his style, despite his lyrics clearly being cut from a lesser cloth.

Perhaps Hurricane Chris already did enough to propel his career to that next level when he dropped a second single which also reached a good height of popularity. “Hand Clap” is another club banger designed to get heads nodding with its frenetic energy. As with similar joints, the lyrics in the verses are as forgettable as this:

“Lemme get a hand clap, hand clap
Lil’ mama breath stank so I told her bad back
And hand me some water, so I can roll harder
Slam on a hater like my name Vince Carter
They lookin at me crazy ’cause I bounce around the club
And I be clappin my hands like I’m tryna kill a bug
Row, row, row your boat gently down the stream
Ain’t nobody in the club feelin like me
Plus I got a click of gorillas in black tees
Make the whole club clap like its some kinda disease, please”

But the repetitive chorus is an infectious slice of commercial rap pie. Though “Handclap” did well in its own right, perhaps a wiser choice would have been to avoid the typecast and release something a little more introspective. Unfortunately the featured artist specializes in the party tracks and rarely delves deeper into his heart and mind.

Hurricane Chris has plenty of time to legitimize himself as a rapper that has more to say than the shallow surface-level stuff, but for now he seems happy with just that. The Magnolia has produced better young artists via Cash Money Records and though his style diverts a bit from that path, Hurricane Chris has the potential to be better than what “51/50 Ratchet” delivers. Maybe he can overcome the last-summer hype and truly be a good artist in the future but it will require some growing up, dedication and personal evolution.