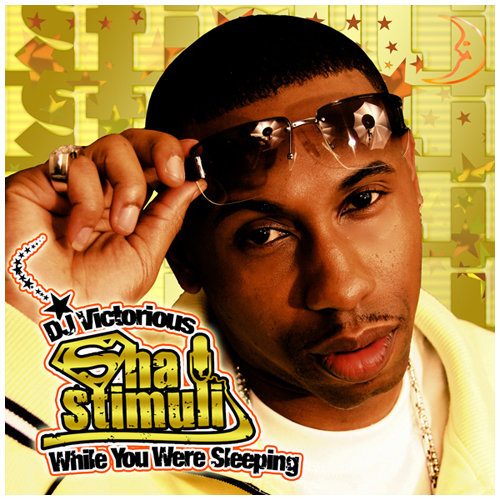 Sha Stimuli & DJ Victorious :: While You Were Sleeping

DJ Victorious and Sha Stimuli have committed themselves to a truly Herculean goal by agreeing to release one mixtape every month for the entire year of 2008. So far, they have not missed a deadline yet. I was slow to catch on to this movement, but my acquirement â€“ and subsequent review â€“ of the classic mixtape “March on Washinton” was one hell of an introduction to the hip-hop duo. My question hereafter was would Sha Stimuli be able to maintain anything close to the quality of “MOW” over a body of twelve mixtapes? Before anyone mention Lil Wayne, let us please keep in mind that not everything he dropped during the torrential downpour of 2007 was A+ material. However, if ANY artist of negligible talent and creativity was to dump a smidgen over two hundred tracks onto your hard drive, the law of averages state that they would get it right at least SOME of the time.

Anyway, after I reviewed “MOW”, I made a personal promise to myself that I would catch every single installment of the yearlong series just to see where it would go. Sha Stimuli and DJ Victorious strategy in keeping it interesting is to implement a different theme for every mixtape â€“ a magnificent strategy to avoid sameness for diluting the total output. If “While You Were Sleeping” was to have an alternate title, you could call it the “Collaboration Mixtape” and it would describe the overall focus of this installment. Every track on this mixtape is collaboration between Sha and another mostly NY-based emcee or emcees. The emphasis is on street rhymes and battle raps on this collection. Just to give you an idea of some of the people who joined Sha in the mic booth:

Okay, you probably get that some serious heavyweights showed up to do their thing on this one. Here is the thing though â€“ Sha does not need even one of them. No matter which track it is, Sha comes on and simply outshines whomever he rhymes with â€“ and I promise you that NO ONE phoned in his or her performance. This effort comes across as less cohesive than “MOW”. That is understandable considering that there is no common theme to tie everything together. What it does excel at is demonstrating that Sha Stimuli is an emcee that is more than capable of carrying an album across by himself. He just does not need a gang of collabos to get his music over or to get his message across.

His writing is clever and substantial enough that additional artists seem to divert away from the full narratives he spins over the course of a track. In cases to where his rhyming partner appears to falter, Sha Stimuli comes in and re-elevates the track. In addition, Sha is one of those rare rappers who can manage to work with any style of artist or track and fit right in without sounding forced. Peep his work on the “Never” remix with Scarface or his surprisingly good team-up with Gucci Mane on “Exercise U”.

Though this edition does not deliver the highs of “MOW”, trust me when I tell you that his verses still make you pay attention. This mixtape is worth getting just for the completist and because I have already peeped out a couple of other mixtapes (“Hotter Than July” and “Love Jones”) and Sha has made me believe that he and Victorious might just pull this gambit off.