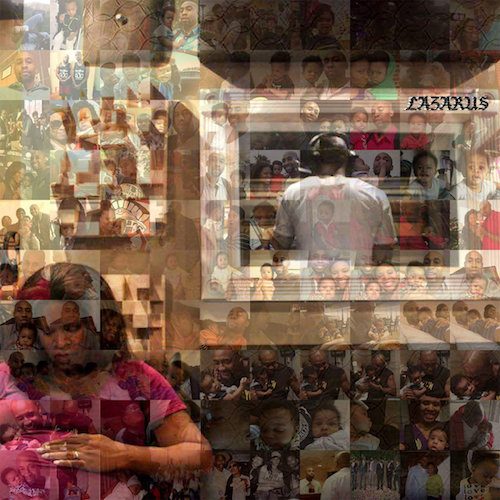 Sha Stimuli is the type of emcee you shout from the roof about when you discover his music. An emcee’s emcee cut from a similar cloth to Crooked I and Elzhi, “Lazarus” inevitably landed undetected and I’m left wondering the hell why.

Lyricism is often dismissed in favor of minimalism, melodies and crime porn, so I’m going to deliver this review primarily in rhyme-form. When great emcees are discussed, I diss, cuss in disgust and spit stuff. The best-at-it rhyme schemes are often overlooked like dead rapper crime scenes. While Eminem, Kool G Rap and Big Pun are idolized, rivals find idle eyes blindly pass on their mindful rhymes and byzantine lines. Sha Stimuli paints pictures and blasts you with quotes, meaning much like elderly cats and dogs, his catalog is suffering from masterful strokes. Sitting somewhere between Saigon and Papoose vocally, Sha’s bars are equally advanced but he surpasses them both emotionally. Straight from the outset, Sha sets it out:

“When I was seventeen
I wanted to be the best rapper the world had ever seen
But it wasn’t realistic, I was simplistic, I had no clever schemes
So I just played ball, since I got tall, that was a better dream
Just let that breathe, I’ma take y’all back hold up
I wasn’t like them other kids, when I was young
My teacher asked me what I wanted to be by the time I was twenty-one
I said I want to see twenty-one, start my own business
stack funds and live life until my breathing is done
My teacher was stunned, I really was dumb
I hung with dudes that believed
when you leave the house, you should always leave with a gun
And I ain’t want to go to college, if you see where I’m from
it’s really all about a dollar when you’re eating up crumbs”

There are some deeply personal tracks on “Lazarus”, and each verse is packed with passionate raps highlighting that these streets aren’t glamorous, but hazardous traps. “Remember Me” is Sha’s message to his absent father, even suggesting that he often feels he’d rather not have existed than grown up with no daddy. Pain is a part of his bars like it is to an absinthe farmer, but he keeps high spirits with lyrics not suited to clubs like a broke caddy.

“Jail University” is a blunt observation that a trip to the penitentiary is inevitably more impressive than any attempt to better yourself mentally. It empathizes with budding rappers who may as well aim for prison to remain driven. It’s an interesting concept, showing that doing the morally ‘right’ thing by going to college to improve his knowledge, doesn’t promise coffers in the pockets.

“Bad Day” has Sha playing the role of a domestic abuser who has only experienced violence in the relationships he’s seen first-hand, so he’s learnt that to be the best person he needs to be the worst man. Then there’s the responsibility for the state of the USA playing on Sha’s mind with “Escape the Lies”, feeling that he could be doing more to rectify hate crimes and the racial divide. No matter how positive he tries to be every day, racists simply can’t engage thoughtful discussion and Sha ends up being killed anyway. It’s easy to see how so many young men suffer depression, particularly as not everyone can open up to confession. “Lazarus” has a therapeutic feel, and while better music still never lets his skills elevate the bills, there’s more to think about here than seeing Eminem on several Benadryl pills smelling Heather Mills severed leg, dressed in leather heels tethered to Penn & Teller’s medical bills.

The monstrous 8-minute “The Edge Pt. 1 & 2” is an excessive, modern retelling of Grandmaster Flash’s “The Message”. It’s the antithesis of what modern rap listeners leanings is, because unless they spend evenings annotating Genius, many stay gravitating to convenience. Admittedly, the production holds up just under par like Tiger Woods in a Wonderbra. The bounce of “ToGetHer” stands out like a sore thumb thanks to producer Redd Lettaz and Sha’s passionate message flows naturally (like bed wetters).

While not exactly heaven-sent, “Lazarus” is better than many records that set out to tell a message from robbing hoods to becoming merry men. It’s all about the everyday struggle and the dismissiveness of academics, yet Sha’s style is full-on rapping clinic but never comes across snobbish, pompous or schizophrenic. Nerds will say wordplay deserves pay, but the adjectives and verbs displayed confirm this stance has no chance in the worst way. Destined to remain hugely underrated, Sha’s latest under-pavement release is under-appreciated, and that’s an understatement. He’s been killing it with mixtapes since 2006-straight and remains sharper than a quick shave with a switchblade dipped in a citrus cake. I’m glad Sha has continued to rap as his pen game is top-tier, far better than this writer’s excuse for a rap review, so I’ll stop here.

On a serious note – check this one out.