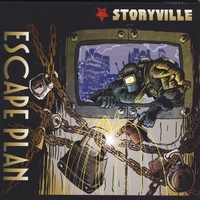 Philadelphia MC/producer Storyville is affiliated with RAHM Nation, a label which is on a mission to make hip hop positive and relevant again. Storyville may have been four when Public Enemy released “It Takes a Nation of Millions to Hold Us Back,” but he is clearly influenced by PE, and his debut is full of the same politicized, righteous anger that made “Millions” such a remarkable album.

Storyville gets a lot right on “Escape Plan.” When he is at his best, he combines interesting, head-nodding beats with lyrics that question the status quo and make the listener think. “Jitterbug” has on old jazz beat, provided by Joe Lowery, that perfectly melds boogie-woogie horns with boom-bap drums, and Storyville holds his own even when he’s sharing the mic with Gift of Gab. “Get Something” has a beat built around a gypsy violin, over which Storyville and crew offer rapid-fire verses. “Don’t Look Back” is a much-appreciated ode to intelligent females, with lines like “Yeah, girl, shake that intelligence/work that IQ/and drop it like it’s smart…I like girls with attitude and passion/she’s proud to be a woman/so thanks for asking.” “Reckless,” one of the best tracks on the album, has Storyville riding a frantic piano riff while telling a cautionary tale of drug addiction.

Storyville doesn’t always nail it, however. He deserves props for being political, tackling larger issues, and not just flossing or rapping about sex and money. Still, being lectured to sucks, and Storyville does get his lecture on, like on “Technology,” which asks “Who’s the true human, you or technology?” This is heightened by the fact that he doesn’t let the listener forget that, unlike most rappers, he is conscious. The chorus for “Not Da Norm” makes this clear:

What if I don’t want to get a lesson at the club? Even though the message of “Not Da Norm” is on point, the heavy-handed approach got my back up. Less lecturing and more humility would do Storyville’s music good. “Escape Plan” is also a too humorless for its own good at points. The plodding “Broken Glass” is one example; it has a dour beat, and lines like “Don’t mean to ruin a holiday and I apologize for being so negative/but don’t be fooled by those pretty colors/fireworks are made in sweatshops by kids.” There are a few more funcrushed beats on the album that are a drag to sit through, and the drum n’ bass “Secret Society” is grating. (Of course, that’s what people said about Public Enemy’s beats.)

Despite the shortcomings of “Escape Plan,” it’s hard to be too critical of someone who is pushing the envelope and trying to do something new and interesting with hip hop. The good tracks on this album make up for the flops, and the overall vibe and intent of “Escape Plan” make it worth checking out. It’s an above-average debut from an MC and producer who I’m expecting great things from in the future.