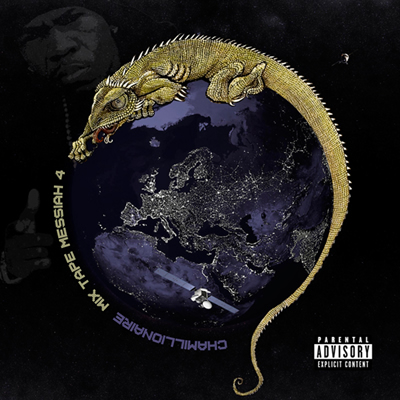 Chamillionaire is back! Technically the man really didn’t go anywhere as it’s been around a year since his last CD, which by hip-hop standards is a relatively speedy turn around. The difference is that before and after Chamillionaire dropped “Sound of Revenge” he was hustling on the mixtape scene like crazy. From the previous Mixtape Messiahs to “Tipping Down” and “Man of Fire,” Cham never stopped the dope material from coming. Something changed after he dropped “Ultimate Victory.” On the intro, Cham chucks it up to needing a vacation since he’s been grinding since 1998. That’s understandable, but one has to wonder whether lackluster sales and an unresponsive hip-hop audience might have had something to do with it. “Ultimate Victory” was a great record, but it seemed too intelligent for the mainstream and too mainstream for the underground. That’s actually been Chamillionaire’s curse from the start, he has never found a way to break past his initial audience. “Ridin’ Dirty” seemed to have changed things, but in the age of ringtones and singles it seems people enjoyed the song but not the artist. Frustration with this situation surely played a role in his self-imposed suspension, but Cham has learned to embrace the fans he does have by returning to his roots. “Mixtape Messiah 4” isn’t the free treat that volumes 2 and 3 were, but it is the underground heat we’ve come to expect from Chamillionaire.

Consisting of 2 disks, the first disk is the meat of the album while the second disk is more of a collection of b-sides, unreleased material and collaborations. Together they make for a triumphant return for King Koopa. Famous for his impersonations of Texas rappers last time around, Cham decided to impersonate the whole game this time around with “Roll Call Reloaded,” In the span of 5 minutes Cham tackles Jim Jones, Jay-Z, Lil Wayne, Rick Ross, Plies, B.G., E-40, Snoop, Jeezy, Game, Bun B, and even The Dream. Not all impersonations are 100% on point, but it’s an entertaining song. Another “concept” song that has gotten buzz is “Internet Nerd’s Revenge” where Cham takes playful jabs at the online world by rapping in the perspective of an “internet nerd.” Cham has fun with hip-hip, but makes sure he gives variety all along. On “My Life” he spits from the heart:

“Lookin out my window, holdin my weapon like Malcolm X and
And it seems I’m over-stressin, feelin like hatin is your profession
And I know a couple Texans that got killed for over-reppin
So I never be oversteppin boundaries bounded to my weapon
When they ask me how I’m doin, I just tell ’em “I’m doin super”
I got a date with Destiny, allow me to introduce ya
Her little sister Fate told me I’m gon’ be the future
And legacy’s everything to a Martin Luther King Koopa”

To be honest, both disks are just full of quotable Cham material as he is in top form throughout. On “The Real Thing” he revisits his frustrations with the rap game:

Even on “Horror Flick Intro” he spits fire:

“Ain’t a rapper that’s high as them
Higher than air or as fly as Cham
I guess I’ll be the pilot then
Move out the way cause I’m flyin’ in
Let me talk to the streets baby how you been
Grind to the end gotta grind to win
Tryin’ to stop that eh! try again
I’ll dig a hata up make him die again”

You can tell by now that I’m a big Chamillionaire fan, but the man is just gifted when it comes to lyrical skills. Despite being a mixtape and consisting of a few recycled beats and short songs, there’s nothing weak on “Mixtape Messiah 4.” Any fan is bound to find something they like here and there is plenty of single worthy material here â€“ from the funky “Gotta Be Playa” to the Mistah FAB assisted “2 MPH.”

“Mixtape Messiah 4” is another quality release to add to Cham’s impressive discography. The man has never dropped a wack project and this mixtape/album is no different. The bulk of the material sounds good enough to have made the album, which only makes fans anticipate volume 5 (coming in November) and the official album (coming in December) even more. The only downside to the man returning to his roots is that he literally returned to the distribution methods of the early Color Changin’ Click material â€“ meaning unless he stocks your local mom and pop (and outside of Texas this is unlikely) you’ll have to hit up his website up to order this joint. It’s a small inconvenience, but well worth the effort as this is easily the best mixtape I’ve heard this year.