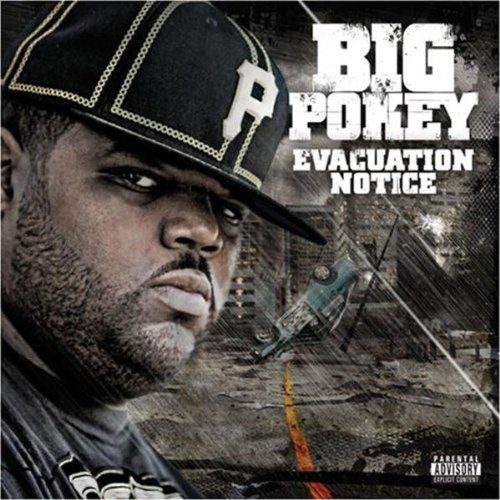 If the name Big Pokey rings a bell but you can’t quite place where from, you probably know him from his guest verse on Paul Wall’s “Sittin’ Sidewayz” from a few years back. His roots go back far deeper than this one cameo, however. Pokey garnered recognition initially from his appearances on DJ Screw’s mixtapes in the â€˜90s, and he can claim to be one of the original members of the Screwed Up Click. His first official album dropped in 1999, and â€“ between solo and group projects â€“ he has now easily released enough discs to fill your CD changer.

His new album, “Evacuation Notice,” is his debut for Koch Records, but he’s still unrepentantly repping the south, with production from H-town bigwigs like Mr. Lee and Sean Blaze and a slew of guest MCs, including Slim Thug and Paul Wall. Big Pokey’s delivery fits within the Houston mold as well, as his raspy, almost whispered tone and cool-headed flow are as much musical counterparts to the beat as displays of lyrical fitness. Someone not predisposed to like this style of rap might opt for adjectives like “mild” or “listless” to describe his vocal style, but it definitely suits the vibe he’s going for.

The centerpiece of the album is thus the music, which is thankfully quite good. At times, the raps almost blend into the beat itself, making it hard to pick out individual lyrics but easy to catch the groove and ride with it. Things start off quite nicely with back-to-back smoothies in “9 Times Out Of 10” featuring Papa Reu and “Let Dem Boys Know” featuring Lil Keke and Paul Wall. The first is an R&B-type track that playfully boasts about his prowess with a particular lady, but with an almost delicate posture toward his beloved one that you rarely hear on this kind of song. The second song is signature chopped and screwed territory produced by my winner for name of the year, Beans & Cornbread. The beat is molasses-slow and butter-rich, and the smallest of Al Green organ samples gives it that extra soulful touch. The third track, “The Way I Live,” starts to show Big Pokey’s limitations as an MC, as he struggles to convey anything emotionally resonant in his attempt at a measured look at life in the streets. The guests have similar problems, preferring trite generalities to heartfelt ghetto snapshots, although Big Mike does a better job than either Big Pokey or Mr. 3-2. It doesn’t help that the beat is a little cheesy, or that T.I. has already made this song, only much better (“Trap Muzik’s” “Doin’ My Job”).

Things pick back up with “Boss Hogg On Candy” featuring Slim Thug, which goes back to the successful formula of smooth, slow beat plus chilled out lyrics. Having Slim Thugga contribute a 16 is never a bad thing, and Pokey is decent as well. “Mobb Niggaz” is similar and shows the best of what Big Pokey has to offer, as the dark, plodding beat and well-written hook keep the song’s momentum going through its four and a half minute duration.

A few things derail this easygoing affair, though, and make it hard to recommend wholeheartedly. Most obviously, there is not much going on here in the way of subject matter. Granted, this is true of a lot of rap releases, but those who get away with it have to be extremely skilled at their trade and have some other incredible asset to make up for it, whether it be complex rhyme schemes or extraordinary flow. Big Pokey lacks the kind of dynamic presence to turn his lack of content into anything other than a liability. Guests can be of some help in this regard, but the ones who turn up on “Evacuation Notice” don’t really add anything new to the mix. Additionally, the number of guest spots builds up quickly, with every single track bearing a “feature” and half the songs boasting two. It does keep Big Pokey’s monotone delivery from getting old, but it also prevents the album from having any real cohesion.

Still, the music here is solid throughout, and the mood it evokes matches the MCs who flow over it, even if they’re not exactly spouting deep thoughts. It’s not the kind of thing you’ll be rocking on your headphones and it certainly won’t have you hitting the rewind button (do they still make those?). On the other hand, if you don’t go in expecting more than a collection of smooth beats and decent raps to chillax to, you won’t be disappointed. For a major label debut, that’s about par for the course.