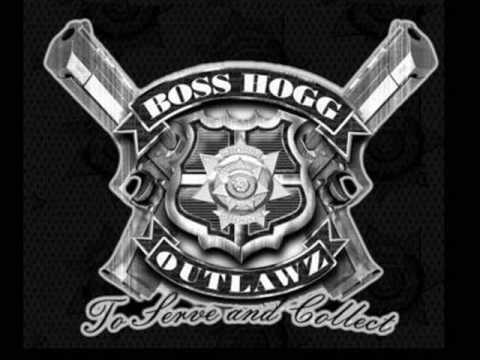 t’s been almost two years since we had a proper release from the Boss Hogg Outlawz in the form of Slim Thug’s national debut “Already Platinum.” After releasing countless mixtapes, the crew secured a deal with Koch and have dropped what is their “official” debut album. The first thing that stands out is that while their previous mixtapes all included a bonus chopped and screwed version, this is missing on the national debut. Label politics probably played a part in this as the rappers may get credit for a whole other album if they drop the chopped and screwed version separately, but fans should at least get the same amount of material on the legit release as they do when they cop the bootleg. The crew itself consists of Slim Thug, Killa Kyleon, Chris Ward, Young Black, J-Dawg, PJ The Rap Hustler, Rob Smallz, and Sir Daily. None of these guys are new to the game as they all have been dropping independent albums and mixtapes along with Slim Thug since the 90s and in truth this is less of a group album than a compilation showcasing the talent on Slim Thug’s label. The self-proclaimed “boss” remains the top rapper in the camp, but the rest of the crew holds its own.

The album opens up with a Slim Thug solo in the form of “We Boss Hoggin'” with Terry “T.A.” Allen providing a smoothed out beat featuring silky synths and a bit of old school G-Funk sound. Slim Thug rides the rhythm well and lets us know just what “boss hoggin” is all about:

“I’m up before the sun rise, pulling out my supplies
I got hustle in my eyes, can’t let the cash die
I’m a boss hogg outlaw, chasing my stacks
Whether weed or CDs, or keys of crack
I gotta get it, being broke â€“ a nigga ain’t with it
Show Slim a target, I promise I’ll hit it
I spit it for the real Gs who be out on the grind
Who hustle cuz dollar stacks is all they got on they minds
Get your money nigga, cuz if you don’t some one will
I can’t depend on a record deal for a meal
I’m a make it for my mother, one way or the other
I never did like snakes so I got out the gutter
I made it now, that’s why Slim the most hated now
No more living in the hood, we upgraded now
And they say, who do you survive up in the northside
In the city where the skinny niggas die
Tell momma don’t cry
Cuz even if they kill me
They can never take the hustle from a young G
I’m Boss Hoggin!”

Easily the album’s best track and on par with Slim Thug’s album material, “We Boss Hoggin” shows a lot of promise for “Serve and Collect.” “Wood Wheel” follows the current trend of Texas rap, meaning the beat contains sparse and dark synths and the hook drops in a screwed and chopped line from another song. Original it is not but effective it is as it is a certifiable trunk rattler. By the time “Recognize A Playa” you notice the trend that the music, despite the lack of super producers, is tight but that the topic matter severely limits the album.

Whether it’s Mr. Lee or Terry “T.A.” Allen, the production is on point throughout. Best described as Texas funk, the grooves on this album go toe to toe with the best tracks dropped from the Lone Star state in recent years. The problem is despite solid production the content on the album is stuck on repeat. J-Dawg crafts another car anthem on “Ride on 4S” and does a decent job, but nothing is new here. Killa Kyleon dedicates the hook of “Badge on My Neck” to cars and recycles the already old term of “peanut butter inside.” With that said, the album achieves its purpose very well as it is obvious Slim Thug and the camp just wanted to put together an album of hot street tracks you could bump in your car. “Straight Outta Texas” will make any Texan proud and is dope enough to be bumped in any state. “I’m Fresh” is another dope song though Young Black shows little in the form of lyrical promise dropping lines like “falling like Alicia Keys, Pick it up like pieces.”

Overall, “Serve and Collect” serves its purpose well as it provides track after track of bumping tracks for your slab. Slim Thug is and will always remain the leader and the best rapper out of all the Boss Hogg Outlawz. At the very least, the rest of the crew provides some variety. The most impressive thing about the album is the fact that Slim Thug has managed to drop some dope tracks without the help of multi-platinum producers, finally showing us why he was able to push all those units independently in the first place. While this would have probably made a much better summer release, it also makes a good CD to keep in your rotation as spring time comes in and your car windows start rolling down.