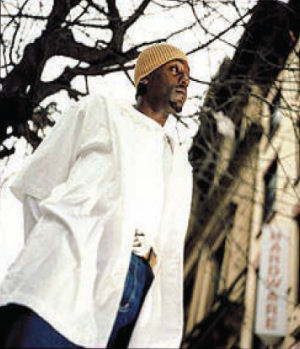 At the outset the vibe for the night was just right. The publicist for Paulie Rhyme comped me guest +1 as a courtesy to come check out their show and provide a little coverage of it quid pro quo. Been there, done that, bought the t-shirt several times over. The chance to see a hip-hop legend like Prince Poetry flowing on the mic was simply too good to pass up too, even if it meant rolling out very late on a none-too-warm November night in Omaha. I know it may seem rather rude to gripe about something I paid nothing to see, having been comped in for free, but don’t think this night didn’t cost me gas money and self-esteem. Let me start though by saying who did nothing wrong – the PR people or the artists on the Ice Bears Tour themselves. Everybody who performed that night was a professional under what were arguably depressing and difficult circumstances. Local acts like Menace and The Reverend Jim did everything in their power to warm up a lukewarm and significantly undersized crowd. In fact to be perfectly fair they may have gotten the best reactions of anybody the entire night long. This creates a rather vexing conumdrum because on one hand I’m happy to see local fans support local bands, and on the other I’m apalled knowing how poorly received the evening’s main eventers were. Let’s be clear though, when you’ve got anywhere from 20-25 people in a club that could easily hold 200-250, nobody is getting a GOOD reception. I’ve seen the guitarist from Tesla play the same venue to a crowd that was practically overflow out the door by comparison. Not the band Tesla – JUST THEIR GUITARIST. Somebody didn’t promote this shit right. Reverend Jim and I had a chance to chop it up about this sorry state of affairs after Prince Po’s set. Hold on a second, I know you want to hear about the actual acts on the tour, but I’m going to give you some good foreshadowing on why this was a bad evening for the paid performers. Jim’s theory was simple but I think it holds some weight – he believes the Omaha hip-hop scene has been segregated into “Northside” and “Westside” and the two don’t really merge with each other. I couldn’t let that goTOTALLY unchecked though, and I had to point out that Sokol Underground has had shows that draw from both scenes and play to near capacity houses. I also remember a show I covered for this site on Halloween where Del & Devin the Dude drewPHENOMENAL numbers for a downtown club where every age group and demographic you can think of wasWELL represented. While there may be a kernel of truth to Jim’s theory, a properly produced and promoted event can always represent and draw hip-hop heads from all over town. Done well they draw people OUTSIDE your local who come for the vocals. I should know given I’ve driven to venues in Lincoln, Chicago and Detroit just to see a good hip-hop show. Now let’s get back to the actual billed artists on the tour. Atherton took the stage and only two people were standing – I was one and I suspect the other one wasPrince Po even though he was nowhere in sight. The 5-10 people who were either friends, fam or diehard supporters of the local acts that actually bothered to stand up and cheer for their peoples promptly vanished. They were sitting down watching the local news (someone had actually put A TV AND TABLES in the floorspace of the performance side) or out at the bar getting drinks. I felt so bad afterwards I bought two drinks – a rum & Coke for myself and a 7-Up for Atherton to ease his vocal chords (he doesn’t do alcohol). Cleveland’s own Paulie Rhymewas out next to rock. Never have I had such unfettered access to the stage while taking photos during a show, and I don’t consider that a good thing. Half of the fun is the challenge of trying to get anywhere near the stage through a thick crowd, elbowing bodies along the way, hoping your camera doesn’t get dropped or broken – sometimes having to settle for taking a very zoomed in shot from the far left or right of stage. Not this time. In fact it was so easy to take photos at least one person in the bar thought I was a roadie for the tour. I suspect 3 people total were standing for Paulie’s performance. Now to be sure nobody wanted to look like a geek by standing up by the stage in an empty venue, so I don’t blame them for quietly playing the back with a drink in hand. I on the other hand was comped in so I’m OBLIGATED to make the most of this experience. I’m really questioning though whether or not the show’s promoters had a clue. Did they put up any fliers around town? I don’t remember seeing them. Was the show mentioned on Power 106.9? I never heard it. Were people really going to come to Shea Riley’s on a cold November night to see hip-hop? It’s not exactly a venue KNOWN for hip-hop acts.

Regardless at this point I was feeling embarassed for everyone involved – for the people there giving these rappers a lousy reception, for the rappers themselves playing to a “couldn’t give a fuck” crowd and for me taking photos which might MAKE rappers like Atherton look like a geek when they’re not. He can’t be faulted in any way and neither can Paulie. Atherton in particular worked really hard to get the crowd involved. He jumped off the stage, walked out with the mic in his hand and rapped to the people who were sitting there. He was energetic, motivated, tried to engage the crowd with “name that sample” contests to get free merch, the whole nine. For all it was worth he might as well have been rapping to a brick wall.

At this point I was still willing to believe the night wasn’t a total loss. I had been comped in for free, all of the acts had been professional despite a small and unresponsive crowd, and I was getting promo material from artists who were just happy ONE person in the venue gave a fuck. Delusionally I allowed myself to believe the crowd was just waiting for a hip-hop legend like Prince Po to hit the stage, and once he took the mic they’d all bumrush to the front to show him respect and get MORE the fuck up than his former cohort Pharoahe Monch once urged people to do. Nothing could have been further from the truth. I walked out to take a leak, came back as he started… … AND THERE WASN’T A SINGLE PERSON STANDING EXCEPT AT THE BAR.

I can’t think of anything more depressing than watching Prince Po spit dope verses that were at best politely ignored. Po made no pretense of this during his set either, wryly noting that he didn’t give a fuck whether anybodyELSE gave a fuck or not, he was gonna get his drink on after the show. This pronouncement may have gotten more cheers than anything else had in the entire last hour. When Po rapped the opening verse of the Organized classicStress I saw 2-3 people stand up and throw their hands up for the song, and when it was over they all promptly vanished again.

I can say after the fact with all sincerity and honesty that I’ve never been to a show that made me feel Nas was right. “Hip-Hop Is Dead.” Indeed. Then I had to check myself and hit rewind. The drinks were reasonably priced, the venue had a good sound system (although the bass on the left was hitting harder than the right) and the performers certainly gave it their all on what had to be the most depressing stop of their tour to date… or was it? I had plenty of time to talk to Prince Po before the show and a minute or two with him afterwards for a photo and a drink (I still owe you a shot of Patron) but the one thing it never occured to me to ask him was whether other stops on the tour have drawn better crowds. Reasonably I don’t think they could have been WORSE than Omaha but you never know. I have to put the blame where it truly belongs, and that’s despite being comped, and say THE PROMOTERS OF THIS TOUR FUCKED UP BADLY. Perhaps that means I won’t get the comp the next time they come through Omaha, but I suspect I won’t regret that for three reasons:

If the promoters of the The Ice Bears Tour would like to prove me wrong and book another show for Omaha, I recommend finding a better venue and doing much more pre-show publicity. I don’t ever want to witness what I did again on Sunday night. Props to these polar hip-hoppers for braving the cold weather AND cold audience to put on a hot show under ridiculous circumstances. I hope they got a cut of the take on drinks, because I KNOW liquor sold a lot better than the merch did that night.