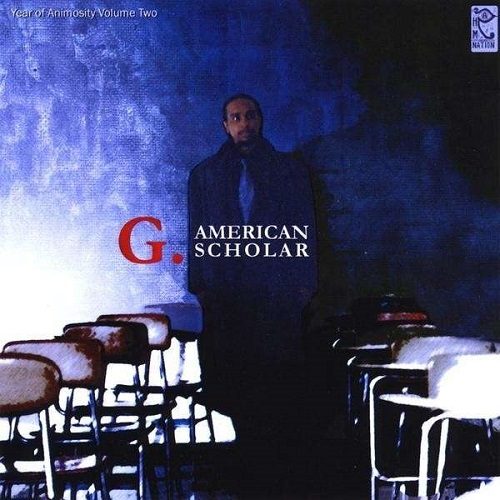 Giovanni “G.” Turner is the co-owner and president of RAHM Nation, which stands for Rhythm and Healing Movement. The label focuses on hip hop with a positive and intellectual bent, and their recent releases by Storyville and Random are worth checking out. Random turns up on “American Scholar” as a producer, offering up his own deconstructed sound collages on several tracks. Several other producers get credit as well, including DN3, Ohene, Scrap Ill, and J. Coleman. They all have slightly different takes on a similar sound, namely chopping up a sample until it is unrecognizable, and using the staccato cuts as part of the rhythm. While the general lack of bass and low ends is regrettable, the overall sound of the production work has an experimental quality that sets it apart from jazz-influenced beats. Clearly, the RAHM Nation crew has spent a semester or two at the J Dilla school of beatmaking, and they are worthy pupils.

G. has impressive resume. He has advanced degrees, and teaches at a university in North Carolina. “American Scholar” is his second album, following last year’s “The Legend of… The Chancellor.” G. raps about serious subjects, like love, poverty, hunger, the state of the world, and the Bush administration. As a lyricist, he deserves credit for rapping about things that matter. There’s just one problem: G. raps in a style that went out with the Cold Crush Brothers and dookie chains. He has a sing-songy flow that tends to emphasize the last syllable of every line, and the result is a little Kurtis Blow, a little Furious Five, and totally unacceptable in 2008. It’s a deal-breaker, and makes it impossible to get through the album, despite the fact that the beats and subject matter are on point.

RAHM Nation remains a label to watch, and the production on “American Scholar” shows what the label can do. G. may be great at running a label, and he may be an intelligent and insightful man, but he is not a good rapper. All the good intentions in the world can’t make up for that fact.