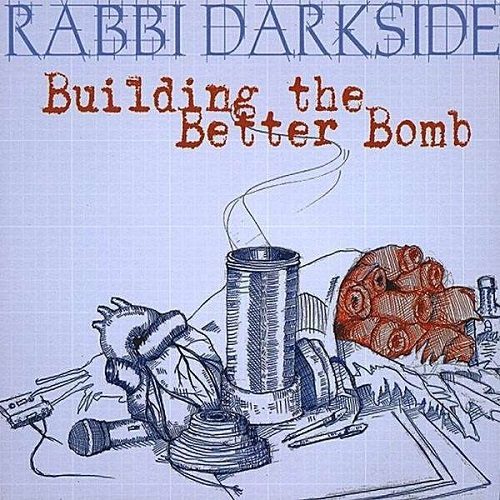 As a previous MTV “Made” coach, an educator, and global traveler, New York’s Rabbi Darkside has managed an unsurpassed amount of accomplishments in his thirty years of existence. Adding yet another chapter to his many achievements, Rabbi Darkside unleashes his long awaited solo debut of “Building the Better Bomb.” With years of personal knowledge and accounts, his idea was to take these experiences to another level and share it with his audience, while taking into consideration the lengths that hip hop music can span as an educational tool.

Growing up in a Jewish household, Rabbi Darkside learned the importance of his beliefs and how it interestingly enough correlated to hip hop as it was another outlet of storytelling, this time more so in a musical sense. By the time he was in high school, he began freestyling as the name “Rabbi Darkside” developed from a fictional literary interpretation loosely based around him and his friends. The nickname stuck as his career developed into becoming more than just an emcee, but also an profound educator. Teaching classes ranging from poetry to turntablism, he has learned to form a union between art and his gift of educating in order to bring out the creativity from students. With this in mind, it only makes sense that he was asked to be an MTV “Made” coach to a shy high school girl who wanted to learn the art of beat boxing. Remember that episode? Yes, that was Rabbi Darkside.

Expanding on his outlets to educate and be educated, Rabbi Darkside has more recently traveled the globe with hopes of instilling his passion for music onto others as well as to learn about various cultures and their views on hip hop. While being able to find a common ground for the love of hip hop in most countries, Rabbi Darkside incorporates this into “Building the Better Bomb” as he introduces emcees he has met from different countries and shows the beauty of diversity. UK’s emcee Appl Juic assists Rabbi D in “Vampires” as they rap about bringing their game and showing what talents they have. With its heavy trumpet like sounds and keys, “Vampires” sports a fresh jazzy, yet abstract beat that is definitely fitting. “Hors la Loi (Outlaw)” features French emcee Raid’n who raps in his native tongue and also features CT’s emcee Mista Mayday who help Rabbi D in this ethereal sounding track of strings with breaks of hypnotic, trance-like vocals.

In addition to his global counterparts, Rabbi D reaches out to some local Brooklyn talents to collaborate on “Building the Better Bomb.” With its guitar heavy beat, “Bloodless Coup” features emcee Core Rhythm as he and Rabbi D express their passion for rhyming and show the impact it has on the individual. As Rabbi D describes “rhyming is a bloodless coup,” he shows how those with the talent of rhyming need to step up and claim their territory in society, Also, emcee Farbeon is featured in “Open School” which stresses the importance of both education and learning.

Rabbi Darkside delves deep into his own personal introspection in “Building the Better Bomb” as he explores the experiences in his life that have shaped him as a person. “People of My Nature” is a poignant track that shows his life as a youth growing up in New York with a single mom. Beginning with the ever so popular lyrics of, ” it was all a dream” that Biggy’s “Juicy” made so famous, Rabbi D adds his own twist as he describes the sentimental items around his room and the music that shaped him. In the funk inspired track “Don’t Let Her,” Rabbi D describes a relationship with a girl and how her deception causes his mother to dislike her. He takes his mother’s words to heart as he realizes, “don’t let her meet your mama.” In a similar track, “Go Back to Bed” shows how to move on and learn from problems that arise in one’s life as the sound of ticking permeates throughout the track. Rabbi D describes the loss of a friend and how his girl has been unfaithful, but in the end shows that he needs to get past the negativity and live his life.

In the clever, jazzy track, “Assembly Lines” which features trumpet player Rian Wilkinson, Rabbi D shows the different aspects of which he consists of. As he names different adjectives, verbs, and career paths, Rabbi D separates each of them with the word “part” to show he is a part of everything. This reinforces the fact that he is definitely a “jack of all trades” and not just another emcee.

With soulful vocals from Brooklyn’s Ann Enzminger, the funk influenced “Walk in the Way” is a beautiful, sentimental track that reminds us about staying positive and making a difference. Enzminger vocalizes in her distinct voice the popular Albert Camus quote, “Don’t walk in front of me, I may not follow. Don’t walk behind me, I may not lead. Just walk beside me and be my friend.” In his poetic manner, Rabbi shows:

“Underneath the sun
Underneath the sky
Recognize that you affect at least a single person…
We can’t undo what’s done
Beautiful change is subtle
Trust your soul, trust friends, and always
Trust your struggle
Decide where you stand
Draw a line in the sand
Use your mind, find a plan
Lead the blind by the hand”

“Building the Better Bomb” is an intimate look into the existence, struggle, and maturity through self-expression. Rabbi Darkside has taken his own experiences and turned them into musical works of art while incorporating the importance of hip hop and rhyme. With examples of his own emotions, passion, and openness to cultural diversity, “Building the Better Bomb” is a perfect representation of what Rabbi Darkside is capable of. His range in subject matter and solid cadence have lived up to many peoples’ expectations as he has proven to be one of multi talented character. Whether it’s in the classroom or through music, Rabbi D is an educator like no other.