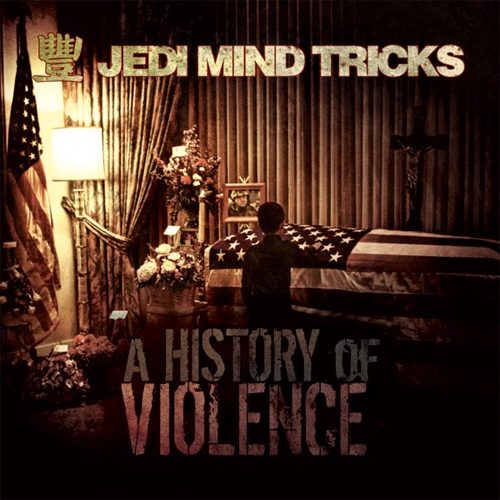 “Vinnie ain’t a sucker, he doesn’t record happily
I just black out in the darkness of God’s tapestry
Boomerang suckers – I throw ’em they come back to me
That’s why I travel with Gods and four gats on me
I don’t even listen to y’all, y’all whack to me
I don’t want that bullshit y’all make attached to me
.45 calibre claw, so fall back from me
While y’all gradually, get trapped in the Earth’s gravity”

Some things never change in hip-hop, and that’s for the best. Try imagining JMT’s Vinnie Paz as a happy-go-lucky pop rapper who likes to sing, dance, and watch the female species shake their ass. If you’ve heard any JMT record from their 1997 debut through 2006’s “Servants in Heaven, Kings in Hell” you know just how ridiculously impossible that image is. It’s like Michael W. Smith doing a heavy metal album. It’s like Michael Jackson singing the country hits of Dolly Parton and Hank Williams Jr. Argue if you like that these people are talented enough to pull off such mindbending genres leaps competently. I’ll argue right back that NOBODY WANTS TO HEAR THAT SHIT. You know what you like about a singer or a band when you hear them, and very rarely do you want to see them come out of that and go in a whole new direction. Maybe one cover song for a laugh. Maybe a Christmas album just to push some units during the holiday season. Not wholly unabashed leaps into uncharted territory that doesn’t suit their sound or style. There’s no way to picture the gravelly voiced, relentlessly pissed off Vinnie Paz as anything other than one brutally hardcore motherfucker. The day Vinnie stops making mercilessly violent raps and goes pop will be the day M.O.P. does a duet with Katy Perry.

The opening track from “A History of Violence” shows nothing has changed for Jedi Mind Tricks sound or style, and nothing’s going to either. The pounding beats produced by Stoupe the Enemy of Mankind are perfectly accompanied by Vinnie’s rugged delivery and scratches by DJ Kwestion like “I don’t have it all upstairs, but who the fuck cares?” (Big L rest in peace.) There’s only ONE change on “A History of Violence” but it’s one JMT fans will definitely appreciate – long lost member Jus Allah has rejoined the fold! The result is a sound not heard since 1998’s seminal album “Violent By Design,” an album writer Tom Doggett aptly described as “something to be explored deeply” and “not [to] be ignored.”

It would be tempting but foolish to say “A History of Violence” picks up where that album left off, particularly given the similarity of album titles and artistic line-up. The truth is that “A History of Violence” picks up where “Servants in Heaven” left off, just as that album picked up where the one before it left off. With or without Jus Allah, Stoupe continued to be one of the best (and most underutilized) producers in all of hip-hop, and Vinnie continued to be lyrically brutal and sadistic. On tracks like “Deadly Melody” with Block McCloud the references to serial killers and psychotic madmen flow freely, and without the beautiful piano and pulsing bass it would morph into a dark disturbing track. That’s the dichotomy of Jedi Mind Tricks that’s so puzzling to some – but there’s a definite method to the Vinnie Paz madness. While some gorecore rappers chop up bodies because that’s all they know how to do, Vinnie’s rage comes across as focused and dare I say socio-politically motivated. “Trial of Lies” exemplifies this attitude, as Vinnie blasts on how the images seen on television can be unhealthy for a young woman’s self-esteem. No, I’m not kidding. Read the rap for yourself:

“Turn the television off cousin – that ain’t nothin for a girl to see
I got a niece and best believe she mean the world to me
And she don’t need to see the shit they think that girls should be
90 pound skinny bitches that ain’t even girls to me
Essentially that shit designed to take a hold of you
Tellin lies to your vision, take control of you
They findin different ways to take your fuckin soul from you
Show about a model make your self-esteem low for you
Everything is fake, trust me no one that lovely
I met a lot of famous people and they fat and ugly”

Words of wisdom from one of rap’s angriest scribes? Of course. That’s the secret of Jedi Mind Tricks, combining brutality with intelligence and street smarts over great beats. Jus Allah steps back into this mix and fits like a glove, almost to the point you may at times have trouble telling his raps and those of Paz’ apart. It makes no difference as long as they make boom bap hip-hop tracks like the pounding M.O.P. and Kool G. Rap sampling “Heavy Artillery” or grisly operatic hymns like “Butcher Knife Bloodbath.” There’s no trick to “A History of Violence,” an album whose cover may appall both liberal and conservative alike by seeming to exploit a patriotic war hero’s funeral. Besides the fact it’s clearly a staged image just for the photographer’s lens there’s something far more subtle to glean from the artwork, just like there is to pull from the explosive delivery of lyrics on a JMT album – violence is as American as apple pie and baseball. When we try to recoil and pull away from that grisly truth we deny the true history that this nation is founded on, and just because you avoid looking at something unpleasant doesn’t make it not exist. If you’re up to the challenge “A History of Violence” peels back the curtain that hides the truth in a savagely beautiful way.