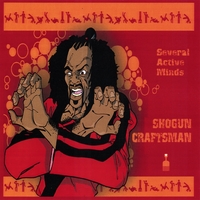 The crew is Several Active Minds. In light of the hyperbole, they have a short bio. After some cleanup, it reads sic: “Not since Wu-Tang Clan have backpackers, graffiti headz, thugs and R&B chicks all agreed on a crew’s beats and rhymes. Combining the sonic cacophony of RZA, eclectic melody riffs reminiscent of A Tribe Called Quest and loop chops Ã¡ la DJ Premier, Shogun Craftsman is what you’ve been waiting for.” Of course, there is some truth in the last sentence. Several Active Minds is influenced by the above, kinda like immature writers are influenced by great books. It’s symbiotic and can go either way.

Regardless it’s not all promising. I’ve haven’t heard such an anonymous crew in a while – seven members, but, online or otherwise, I can’t find more than the production credits. I say this only for its peculiarity, as names can do little here – no rapper has a distinctive style, vocabulary, or flow, and is pretty much a bubble in one vague but continuous spray. Alas, the tenuous connection with the Wu is broken! It takes a lot of conceptual variety and individual talent to pull off something like a successful album with many artists. Moreover, if your… pretext is Asian combat, it better rival those more famous precedents. It’s hard not to set oneself up for failure.

First, the production. It’s mostly dark, and often sample-driven. In fact, the samples are melodic, and quite at odds with the darker content, or warped to a high-pitch squeal, the latter somehow protesting that it’s not all RZA. Dume41 and Rok Soulo (the main producers) like an occasional nostalgic piano, gongs, violins, and dramatic organs. They’re not always tastelessly intermixed, but that’s about as far as I can take the compliments. It’s subdued, and doesn’t do much. Often, there are spliced clips from real movies, fake movies, or the crew itself – I can’t tell which, but it’s cheaply cinematic, and not atmospheric, like with the Wu Tang. The theme is combat. Nothing is really memorable, and no production serves any particular song, conceptually or otherwise, in a notable way. In brief, it’s all interchangeable.

Second, the raps. As noted, no one is a great, or even good, emcee. They are all somewhere in the middle in every respect, and, like the production, each verse is interchangeable with any other, on almost any track â€“ cut, paste, and watch it all function quite identically. Consider “The Bell Warden’s Warning,” for example:

Islamic undertones, cheap consciousness, and great political laments – it’s all been done before, with greater wit and a better overall performance. If you need a snapshot of what’s wrong with “conscious rap,” there it is – an unwillingness to innovate beyond the same tactics stale even a decade ago. Musically, it’s similarly uninspired: a heavy metallic string spiraling indecisively around the track, a bunch of dark clicks, and really dull drums. Not RZA dulled, but dull – one describes quality, the other a conscious musical choice.

In “5 Fingers of Life,” Knuckleheadbanga, who produces two tracks, makes an appearance. I suspect (and I shouldn’t have to) he’s the first one up – a good flow, and better than the other material here. Little here is explicitly bad, but the title track (alas, the last track – an untriumphant closing!) is simply a relentless rattle and even makes the above indiscretions less unappealing. A poor end to a mediocre show!

Overall, “Shogun Craftsman” is a pleasant listen, mostly because of the production and generally innocuous content. Ah, but “pleasant” does not mean good – it’s just too uninspired, in every way, to really count for something.